For our Four-legged friends - When Dogs Travelled on the Railway

After a survey of my many railway books I have determined that seemingly no one has ever written about the conveyance of our four legged friends by train in the Victorian era. This is a shame and hopefully this post will try and shed some illumination on this apparently forgotten subject.

The dog ticket was an early invention of the emergent railway industry and the National Archives holds a document that lists dog tickets issued between 1849 and 1854 on the Great Western Railway (GWR).[1] Furthermore, in 1848 the Daily News recorded events from two years earlier in which how dog-tickets were issued was detailed. On the 11th September 1846 a Mr Wallop was returning from a day’s shooting to Gosport. Allegedly, Wallop fired his gun out of the first class carriage window, damaging it and the door. On arrival a railway employee demanded Wallop’s name, which he refused to give. But, the official persisted and demanded to see the dog ticket on which the name of the passenger was usually written. [2]

Thus, given that the dates of the GWR document and the events of Gosport, it could be suggested that companies had started issuing special dog tickets in the late 1840s. Yet, given the lack of research on the early railway, this cannot be confirmed. Secondly, the Daily News report also indicates that the early procedure of writing the names of the owner on the dog ticket. The one thing that was missing from these pieces of evidence is whether dogs travelled in a prescribed manner.

However, special procedures for the conveyance of dogs was definitely in place by the 1850s, and a court case from 1858 detailed that procedures for canine carriage had become rather unpleasant for the animals involved. The case involved a man who was pursuing a claim against the London, Brighton and South Coast Railway for his dog that had escaped in the course of a journey. Ordinarily, it was recalled, dogs were conveyed in ‘dog-boxes’ which throughout the journey were stashed under the seats of second class passenger carriages.[3] Indeed, correspondence from the period indicates that these dog boxes were common. 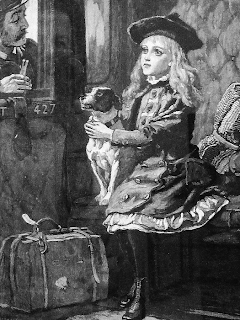 However, the rules laid down that dogs be carried in this manner were sometimes breeched in this period as the accompanying picture from 1882 in the Illustrated London News evidences. Indeed, a book from 1868 called Romey’s Rambles on Railways, stated that many women, who owned small dogs, hid them ‘under shawls and in hand baskets.’ However, other methods of concealment ‘more erudite are occasionally practiced,’ such as one man who concealed his dog in a carpet bag.[4]

Yet, some railway companies attempted to stamp out the and breeches of the rules. A London and South Western Railway Appendices to the working timetable from 1911 stated that ‘complaints have been made of Passengers being permitted to take dogs with them into carriages to the annoyance and inconvenience of passengers. This is contrary to the Regulations and Guards of Trains and the staff of stations should insist firmly but courteously on the animals being placed in the Guards’ vans. However, interestingly this did not apply to ‘ladies’ lap dogs.’[5]

But this raises an interesting question as to whether the aforementioned ‘dog-boxes’ were still used by this time, as the order does not mention a dog-box was required. This said, a London, Brighton and South Coast Railway Appendices from 1922, suggests that railways may have still used them. It stated that no dog ‘unpacked’ was to be received for transport without a muzzle. Additionally, it also orders that the boxes for dogs, that were to travel in the guards van, were not to be accepted if they were ‘not sufficiently large.’ Furthermore, ‘the labels of dogs must be inspected at all points, and any instructions re watering at any particular point &c, written thereon must be carried out as far as is practicable and consistent with the safe custody of the animal.[6] Thus, while the boxes were still used, it seems that, firstly, the practice of putting the dogs under seats had long since passed by the early twentieth century. But, secondly, the rule implies that the safe, comfortable and humane transit of dogs was a prime concern when they were transported.

This change was due to a shift in the attitudes to animal welfare in the late Victorian period. Amongst other letters that have been found regarding the treatment of dogs on trains, The Times recorded in 1900 that the Kennel Club had sent out a circular to ‘the principal railway companies’ suggesting improvements in the method of conveying dogs. They asked that dogs be placed in boxes, side by side, in guards vans and these new boxes would be available at stations, much in the manner of horse boxes, for an extra fee. After this, the boxes would be disinfected. In the Kennel Club’s opinion many dogs have had to be destroyed due to infections caught while using the old boxes that were too small and dirty.[7] Thus, given the rules cited above, it seems that this suggestion was taken up by some railway companies.

Overall, like most things I blog about, there needs to be research on this area of railway history. However, two things can be noted. Firstly, the dog ticket was established early on in British railway history, and a 1950s example I have testifies to its persistence. But, secondly, the accommodation given to dogs improved, possibly because of welfare concerns and public pressure.

[6] Author’s Collection, London, Brighton and South Coast Railway, Appendix to the Working Timetable and to the Book of Rules and Regulations, May 1922, p.142