From nothing to everything: the development of the career railway worker

It has been proclaimed in many places, at many times that before 1914 a job on the railway was a job for life.  Railway workers' careers apparently followed a set course: starting out in their teenage years, employees would undergo some form of apprenticeship, gradually move up through the ranks of their department, and would eventually retire at the age of 60 or 65. Throughout, in return for diligent and obedient service – a form of supplication to the law of the railway - employees received a high degree of job security, the opportunity to rise into positions of authority and, at the end of their careers, that rarity of the Victorian world: a pension.[1]

But these patterns of employment had to have been instituted by company managers and directors at some point. The idea of a career railway worker would have been an alien concept to all railway staff in 1840, perhaps even as late as the 1850s. Yet by the 1890s, if you wanted it, obeyed the rules and did not find better employment (or for that matter were killed when doing your duties – a sadly not uncommon occurrence), the railway could easily be your home for life. 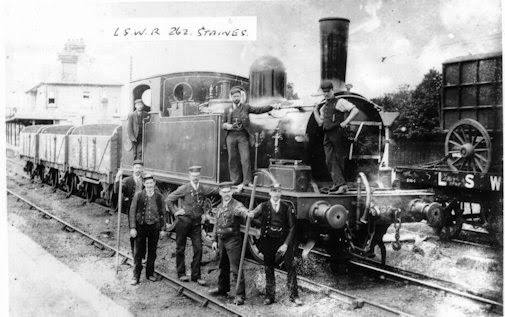 Pinpointing when the ‘career’ railway employee came into existence is not easy. Amongst a multitude of small railway companies, by the 1860s Victorian Britain was the possessor twelve large ones, each of which instituted different employment policies at different points. To add to the melee of confusion, railway workers were divided amongst themselves with regard to pay, working conditions and status. The status and pay of a platelayer, fixing and maintaining the track day in day out, was far lower that the engineman driving the train past him. The clerical staff – who were the only staff  in Traffic Departments who had any realistic chance of entering management if they had the talent and ambition – likely looked down on the porters, pushing suitcases and boxes around station all day. This staff separatism, which management frequently encouraged to keep the staff divided, lest they undertake some collective action over wages or working conditions, meant that industry decision-makers usually determined recruitment and employment policies on a grade-by-grade basis. Standardisation within a company was definitely not the norm.

Nonetheless, despite these issues, general conclusions about when the career railway worker emerged onto the industrial landscape are possible. As early as the 1850s the career railway clerk started appearing. Before then clerical work on the railways was not acknowledged as being particularly unique – the industry being very young – and so the companies recruited the talented, of any age, from wherever they could. For example, on joining the London and South Western Railway[2] as a clerk at the age of thirty-five in 1835, no doubt after being in some other clerical position, William Mears would likely never have entertained the idea that he would retire in 1881.

Yet, very gradually, from the 1840s onwards, the railways established regulations for the recruitment and employment of clerks. In 1846 the London and North Western Railway (LNWR) laid down regulations for incremental pay and promotion amongst clerks, a preference for filling vacancies internally and a set age range for new apprentice clerks – fourteen to sixteen. [4] Other railways did the same around this time; the LSWR brought in some rules around 1843;[5] although rigid formalisation of its promotional and pay procedures was not deemed necessary until the early-1850s.[6]

For the rest of the staff – known as the ‘wages grades’ - the structured railway career started much later. The 1870s saw the Great Western Railway (GWR) progressively specify the route careers should take, when staff should be promoted and their pay each step of the way.[7] Similar rules for new police and porters on the LNWR, as well as a minimum height of 5ft 7in (although this likely came into force earlier), were formalised in 1860. Such regulations, which governed recruitment and the notion of career on the railways into the twentieth century, had become the norm throughout the industry by the 1870s. [8]

Despite the institution of these rules, they did not immediately give birth to a culture where railway employment was automatically considered a lifelong vocation. Did the teenager joining the railway as a junior clerk, lad porter or engine cleaner in the 1870s think they would be with the company until retirement? It is improbable they could be sure of this. Surrounding new recruits were old hands. These older men may have believed in the security railway work provided, they may even have realised the jobs they were doing were their last, but they would have understood that not everyone stayed with the railway until the end of their working lives. They had been losing colleagues to pastures new (or destitution) for decades – a fact they would undoubtedly have imparted this fact to newcomers. In the London, Brighton and South Coast Railway’s case, sixteen per cent of all employees resigned or were dismissed in 1865-69.[9]

The understanding that working on the railways was a lifelong vocation only emerged around 1880s and 1890s, when almost all staff had been with the industry from their teens. Within the Great Eastern Railway, for example, the recognisable facets of railway employment – recruitment at an early age, clearly defined career paths and vacancies being filled by individuals on a lower rung of a promotional ladder – became embedded between 1875 and 1905, with the decisive years being between 1885 and 1895.

The developing idea that railway staff were in a lifelong career manifest itself in other ways in this period. The first railway staff magazines, the South Western Gazette and Great Western Railway Magazine (and Temperance Union Record), appeared in 1881 and 1888 respectively. The magazines’ content of news, reports and informative articles about the railways’ activities reflected employees’ deep connection with the railway and its family of staff, which in part were bound together by their common state: a railway employee for life. Railway employment as a lifelong pursuit was also a factor in the rise of the railway labour movement after 1870. The Amalgamated Society of Railway Servants started in 1871, the General Railway Workers Railway Union established itself in 1889 and the Associated Society of Locomotive Engineers and Firemen came into existence in 1880. [10] Railway workers took pride in their work, looked out for each other and, thus, fought hard as a group for the improved pay and working conditions they deserved. Had railway workers believed their time on the railway was limited, fleeting even, the establishment of such movements would have been unlikely: the fight would have been a redundant enterprise.

There was no such thing as a lifelong railway worker in 1840. This idea, which constitutes a fundamental part of the popular conception of the railway history, developed slowly over many decades, at different speeds in different places. There was an evolution; in the early years of the industry men (and some women) just happened to work on the railway, by the 1890s they proudly called themselves ‘railwaymen’ (and railwaywomen).