Working City to City: The LNWR's on-train typist service of 1910 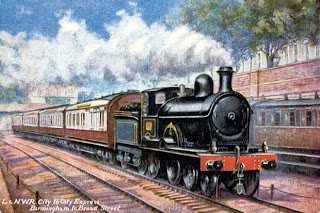 I am sure from the very earliest days of the railways passengers must have done work on the train. It is, some might say, a tradition of the travelling businessperson. However, the declining cost and increasing hardiness of laptops has undoubtedly changed the nature of train-based work. Rather than simply reading policy documents and making notes, as was likely the case in the poorly lit Victorian railway carriages, those travelling to their place of work can now produce via their laptops formal documents that will go on to their colleagues, managers and companies’ directors. The train can be, for many, a second office that is possibly more pleasant than the one at their final destination.

But the ability to produce formal document on the train is nothing new. Long before the laptop was invented, from February 1910 businessmen on the London and North Western Railway’s (LNWR) “City-to-City” express had facility to have their important and urgent documents typed.[1]

The “City-to-City” express was inaugurated by the LNWR between Birmingham and London Broad Street Station to compete with the Great Western Railway’s express services between the same places (the GWR’s services ran into Paddington). Starting from Birmingham at 8.20 am and arriving at 10.35 am, the morning “City-to-City”, which also had a breakfast car attached, took two and a quarter hours to make the journey, whereas the GWR’s service took fifteen minutes less. Although, if you made the journey by the GWR it possibly would have taken you longer overall reach your place of work, Paddington being some distance away from the commercial centres of London. Broad Street Station on the other hand was only a short walk away from the city.[2] The return run of the “City-to-City” started from Broad Street at 5.25pm and arrived at 7.40pm.[3]

Presumably in an attempt to entice to their services businessmen who were eager to save time at work, the LNWR took the innovative step of providing Britain’s first ever on-train typist service on the “City-to-City”. Situated in a compartment specially fitted up with a desk and chairs, the shorthand typist was available to take dictation of letters at any time on the journey.[4] On the inaugural run of the express the work was supervised by Miss Tarrant of the Euston typing room; while on subsequent journeys a Miss Boswell took over.[5] It would, however, seem that there was some initial objection to this service in the press . In the ‘Woman’s Gossip’ section of the Cheltenham Looker-On it was stated that while 5 or 6 hour journeys for passengers was ‘tiring in itself’, the ‘girl’ doing the typing was expected to be at her post five days a week to ‘do office work all the time.’ In its estimation this would be too much work for the ‘girl and exclaimed that ‘the doctors talk of the growth and spread of nervous habits among the people, but who can wonder at it?’[6]

Initially, it would seem the typing service was successful. “I have been kept busy all the way up,” Tarrant said in an interview shortly after the “City-to-City’s” inaugural return run, “twelve passengers dictated letters to me and only once, when we were passing through the Kilsby Tunnel,  was the dictation interrupted…I had no difficulty whatever in using the typewriter, and all my clients appeared to be highly satisfied. The experiment was quite a success.”[7] Yet, after two months the Tamworth Herald would report the typewriting services had ‘not been so well patronised as was expected would be the case.’ It would seem that travellers using the service were unable to overcome the fear that any business they conducted through the train’s typist would not be confidential. Yet, irrespective of customers’ trepidation, the LNWR decided to extend the service to other trains.[8] Whether the typist service was successful in the long-run is unclear, only a closer examination of the company’s files may reveal this.