When Victorian railways conspired against Christmas

One of the features of the late Victorian British railway industry was competition, with railways in all parts of the nation trying to out-perform each other in order to win the patronage of passengers. From the 1880s the Great Western and London & South Western Railways accelerated their services as well as increased the luxury in which passengers were conveyed, to secure the business to West Country locations such as Exeter and Plymouth.[1] Competition between companies also existed on the routes between Nottingham and Leeds, Liverpool and Hull, and Edinburgh and Glasgow, as well as between other major cities.[2]

Some historians have argued that these struggles between railways were a major factor in their declining profitability after 1870, as faster trains and more luxurious carriages cost more to build and operate. Cain, for example, stated his belief that ‘service competition alone would have been sufficient to promote levels of capital spending and methods of operation that continuously eroded profitability.’[3] Personally, I have always doubted the extent to which competitive trains services actually eroded companies’ profitability. I argued in my thesis, on the management of the London & South Western Railway after 1870, that service competition was on the margins of the railway’s activities. It and the GWR ran hundreds of services each day and only four or five express services to the West Country were truly ‘competitive.’[4]

One of the fiercest competitions between railway companies were the famed ‘Races to the North’ in 1888 and 1895. Two groups of companies that had control of the east and west coast main lines competed for the fastest trains between London and Scotland. On the east coast route the competitors were the Great Northern (London to York), North Eastern (York to Edinburgh) and North British Railways (Edinburgh to Aberdeen); while on the west coast route the contestants were the London and North Western (London to Carlisle) and Caledonian Railways (Carlisle to Edinburgh and Aberdeen). The race of 1895, which received the same attention in the press as the derby at Cheltenham, captured the public’s imagination, culminating in a west coast train on the night of 22 and 23 August making the journey between London and Aberdeen in 8 hours 42 minutes. This was eight minutes quicker than an east coast train the night before.[5]

Because of events like this, the press liked to paint these railway races as battles between warring powers. But how serious was the animosity between the companies? Did the east and west coast railways really treat their competitors as enemies? Or were the ‘races’ just an exuberant, but good-natured, expression of a rivalry between them? Perhaps an event that occurred before Christmas 1882 suggests an answer to these questions.

In early December 1882 a very thick letter arrived at King’s Cross headquarters of the Great Northern Railway. Before a list of 214 names was a letter addressed to those in authority within company: 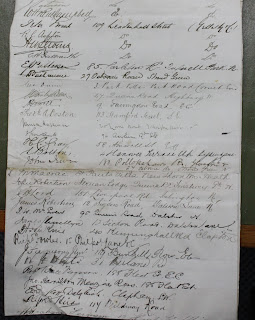 We the undersigned draw your attention to the fact that there are in London many Scotchmen who desire to avail themselves of the opportunity of visiting their friends in Scotland during the short vacation at Christmas but are deterred from doing so by the heavy railway fares.
We would therefore petition to you to give this subject your full consideration and endeavour to make some arrangement, whereby the result aimed at by your petitioners may be gained namely: a reasonable reduction in fares between London and Scotland equal to, if not quarter than that granted during the summer months.
We are certain that should you see your way to meet us in this matter, it would not only confer a great boon, but from the large numbers availing themselves of the opportunity, prove equally to your advantage.
We are yours respectfully… [6]

But this petition was not the only one to be sent, and a duplicate also landed on the desk of George Findlay, the London and North Western Railway’s General Manager. I suspect Findlay’s natural response was to reject the request. But he was an astute railway manager, and possibly because he wished to maintain good relations with his east coast rivals, he contacted to his opposite number within the GNR, Henry Oakley. ‘As I presume a similar application has been addressed to you’, wrote Findlay ‘I shall be glad to know if you will be prepared to join us in declining to accede to the request.’[7] Oakley’s response is not contained within the file, but the two companies decided to reject the petition. Findlay also communicated with the Midland Railway, who likewise operated a route between London and Scotland, and while they had not received a petition, they too were to going to keep fares at established levels. [8]


In 1882 three railway companies, all of which were theoretically competing with each other for traffic between London and Scotland, collectively agreed to deny travellers making this journey reduce-rate fares over the Christmas period. Of course, this case does not indicate the nature of the GNR and LNWR’s relationship five or ten years later when they were racing. Nevertheless, it may suggest that despite superficially appearing to be competing railways, as a matter of fact their relationship was actually quite close and they worked together when it was mutually beneficial for them to do so. ‘Market forces’, in this case at least, did not really work. One thing is for certain, the Great Northern, London & North Western and Midland Railways spoiled Christmas for a lot of London-based Scotsmen and their families in 1882.