In the course of my research I find the most wonderful, weird and interesting things associated with the railways of Britain. I should also confess that I have a love for cats and everything they do. So, when the following tale was discovered on-line, I found it endearing and sweet. In the 2nd May 1870 edition of ‘the Children’s Friend’ was the story of ‘Sevenpence,’ the station cat at Templecombe (shown in 1885). The station was on the London and South Western Railway’s main line to the west of England and was located 108 miles from Waterloo. On account that it was an interchange station on the company’s main line, the article described it as having ‘more traffic and bustle going on than is usually found in rural districts or small provincial towns.’ 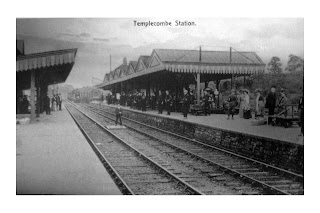 It seems that Sevenpence had an unfortunate youth. As a kitten, in about 1863 or 1864, she was sent from Bishopstoke (now Eastleigh) to a local resident. Indeed, the name was given to her was because of the cost of her transportation. On arrival, for whatever reason, the proposed owner declined to give her a home and Sevenpence was passed between different individuals before being given to the station staff. She was placed in the company’s stable, which was ‘infested with vermin,’ and did her job well, soon showing that she “knew what rats and mice meant.” Indeed, such was the value of her service that a ‘small weekly sum’ was allowed by the company for her maintenance. This sum, unsurprisingly, I cannot find within the company’s accounts. (I did look. It surely came under ‘miscellaneous expenses.’) However, still young, she was a timid cat and never ventured much beyond the stable doors. Indeed, she was also startled by anyone who crossed her path.

With age she became more adventurous and went further into the unknown, becoming ‘a favourite with the porters and the servants of the company, who have ever treated her with kindness and consideration.’ By 1870s it seems that she had grown ‘fiercely bold,’ and whenever a train blew a whistle, or a bell rung, she appeared, ready to greet the passengers. She behaved in a gentle and good mannered way to all. Furthermore, Sevenpence was regularly to be seen jumping onto the track, between the wagons and carriages, and regularly got between the spokes of locomotive wheels, jumping off just as they began to move.

Yet, on many occasions this bold nature got Sevenpence into trouble and danger. As the article stated, ‘Many strange vicissitudes have befallen her, and were she gifted with, speech, numerous ups and downs of a cat life, and hair-breadth escapes, could she relate.’ On one occasion she became concealed in a meat wagon that was destined for London (‘for no good purpose, I fear.’) Station staff were only alerted to the distressed cat by a loud mewing, and, had they not found her sooner, Sevenpence would have found her way to the Nine Elms station staff. On another occasion a heavy weight fell from a crane and missed the oblivious Sevenpence by an inch. At the time she was ‘basking in the sun.’ She was also not particularly concerned by ‘pilot engines and trains in motion,’ and many times, while ‘taking her usual promenade,’ she was nearly crushed to death. But, ‘gifted with more than ordinary sagacity, and nimble in all her movements, she has yet been preserved unhurt.’

Apparently, in her later years Sevenpence did not look as good as she did as a younger cat. But, her life did improve and she abandoned her home in stable for the more comfortable quarters of the waiting room. Here she had a good fire, warm rug, ‘not to mention sundry bits and scraps from kind-hearted travellers, by whom she is much petted and caressed.’

The unknown author of the article concluded the tale by saying that he or she hoped that ‘many of my young friends may become acquainted with the station cat’ who was ‘a useful member of the feline community.’ Further ‘I feel sure all my young readers will join me in wishing that poor puss may be kept from accident, preserved in danger, and live to a good old age, in the full enjoyment of the pleasures and privileges her somewhat peculiar life affords her.’ Whether she did or not, we’ll never know.