In my work on the London and South Western Railway (L&SWR) I am acutely aware of the fact that after 1870 the railway company’s business was affected by external forces such as rising costs, government legislation on safety, fluctuations in the trade cycle and the growth of unions. Indeed, much of the literature on the late 19th century railway industry has focussed on how these factors affected companies’ profitability. Another area of interest is the effect that public opinion had on companies and whether they may have tailored their services to the needs of the public, rather than engaging in ruthless profit maximisation. However, rarely has this been studied in detail. Thus, it was with this in mind that I decided to have a look at The Times online archive to ascertain whether I could find linkages between public opinion of the L&SWR and its policies. I did in part, but my discovery wasn’t what I expected, in that I found a storm that was blowing around one man.

Archibald Scott was born in Dundee in 1821 to a Tanner, also by the name of Archibald.[1] Information Scott’s early life is unknown, apart from the fact that he was employed by the Edinburgh and Glasgow, Edinburgh, Perth and Dundee, and North British Railway companies. In 1852 he was appointed as Traffic Manager of the L&SWR, after the previous holder of the post, Cornelius Stovin, absconded to the United States with a fair amount of the company’s money. In 1870 he was promoted to the position of General Manager with control over all the company’s operations.[2] Thus, by 1884 Scott had been the company’s most senior manager for 32 years.

From the mid-1870s the complaints against the speed and unpunctuality of the L&SWR’s train services began to grow. The May 1876 issue of The Pall Mall Gazette published a letter from ‘Quaerens’ complaining that the L&SWR, amongst other companies, halted the regular trains in favour of ‘specials’ bound for the race meetings at Epsom and Ascot.[3] In an edition of Funny Folks magazine of October 1878, it mentioned the case of a season ticket holder who had brought an action against the company because of delays to his journey. He lost his case, which the publication lamented.[4] In September 1880 a letter to The Standard from a ’victim’ complained that the ‘unpunctuality of the [L&SWR’s] trains was notorious’ and that he ‘had never in my life arrived at Waterloo at the proper time.’ He placed the blame at the feet of the management.[5] Lastly, in the late 1870s the residents of Hounslow formed an ‘Acceleration Movement Committee,’ and under the leadership of Peter Watson they frequently petitioned the company for improved train services. In some cases, trains arriving at Waterloo arrived 20 to 30 minutes late. 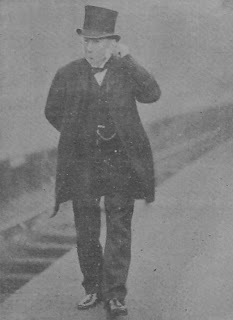 Many of the delays in the train service can be attributed to the fact that between 1870 and 1880 the company’s passenger traffic increased by 126%. In 1870 the company hauled 13,387,357 passengers. By 1880 this number had risen to 30,294,406, and this caused the infrastructure of the company to come under strain, especially at bottlenecks in the system like Waterloo. The lines into that station were narrow and the station was small, only possessing four platforms in the mid-1870s. The company attempted to ease the pressure by expanding the station in 1878 and 1885, adding a further eight platforms.[7] Yet, these changes were unsuccessful in slowing the steady flow of complaints about the company's train services. As always, the blame was laid squarely at the feet of ‘the management.’[8] Then in late 1884 a storm broke.

It is where this storm broke that was important. It was in the country’s most prominent newspaper, The Times. On the 9th October five prominent passengers, Lieutenant-Colonel S.E. Orr, Colonel Clifford Parsons, Lieutenant-Colonel R.H. O’Grady Haly, Edward H. Halsey J.P. and George Fry, wrote to The Times to complain about the unpunctuality of the L&SWR’s train services. All lived about 35 miles from Waterloo and travelled on the same train daily. While according to the timetable they were expected to arrive at 10.24, they always arrived later, sometimes after 11 am.[9] This was followed on the 11th October by another letter from D. Radford who complained about the ‘extreme unpunctuality’ of the company’s services.[10] On the 16th three more letters were published from ‘A Resident,’ ‘A Victim’ and ‘Viator.’ The ‘victim’ laid the blame for the unpunctuality of trains at the feet of ‘the utter incapacity of the management of the London and South Western Railway.’ But it was not all criticism, and while the ‘Resident’ did acknowledge the problems, he defended the company on the grounds of that increased traffic had caused the delays in trains. Also, ‘Viator’ was positive about trains on the ‘Thames Valley Line,’ (to Shepperton) stating that were never more than 10 minutes late.[11]

However, any defence of the company was quickly nullified by the letters that the paper printed on the 21st October. Of six letters printed only one supported the company, with almost all attacking the unpunctuality of the company’s trains. Indeed, the first, from H. Stopes, went further in criticising officials at Waterloo who he claimed were ignorant and lacking in courtesy. Lindo S. Myers stated that he had travelled in Europe and that ‘there is not one [company] so badly managed as the South-Western nor is there any time table which is so purely the work of supposition.’ The only support for the company came from J.M.D. who stated that the trains between Exeter and London were always punctual.[12] Yet, this defence was called into question by a letter printed on the 23rd October in which H.T. Edwards wrote that the punctuality on this service proved ‘that even the London and South Western can be punctual when they come into competition with the Great Western.’ He called this fact the ‘last nail in the coffin’ for the ‘disgraceful management’ of the L&SWR.[13]

What effect this had on the L&SWR General Manager is unknown. However, it cannot be a coincidence that on the 10th November, only two and half weeks after the last complaint in The Times, Scott sent a letter to the L&SWR board tendering his resignation.[14] While other factors may have been involved in this decision, such as the worsening financial situation of the company and Scott’s increasing age, the high profile nature of the complaints, combined with the increasingly poor image of the company because of them, no doubt helped Scott decide that it was time to go.

Therefore, this case overall raises the question as to the extent external pressure played in shaping the careers of Victorian railway managers and the decisions they made. This, subsequently, is an area that needs more work.