My last post looked at the early years of the London and South Western Railway (L&SWR) Servant’s Orphanage . The orphanage was an embodiment of the community spirit that existed within the railway company, as it was established by, and received contributions from, the company’s employees, managers and directors.  I left the story in the early 1900s when a new home was required because the two sites, in Jeffreys Road, Clapham, and Guildford Road, South Lambeth, were reaching capacity. This post describes the new home built in Woking and what went on inside. Indeed, the L&SWR's staff magazine, The South Western Magazine, published a detailed article on the institution in 1921 and it is from this that my information is taken. 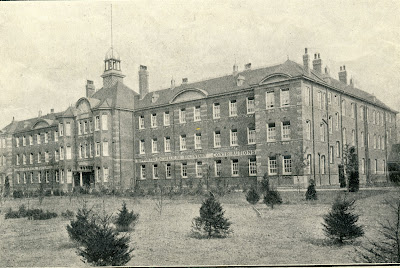 Building - The new home was cited next to the South Western main line on 7.5 acres of land between the Oriental Institute and Woking Station. This land had been purchased from the London Necropolis Company for £2,800, using money that had been bequeathed to the orphanage by the late Thomas Parker Harvey of Clapham.  Soon after, in October 1907, the foundation stone was laid by one of the orphanage’s great supporters, H.R.H. Duchess of Albany. Opened in 1909, the total cost of the building was £30,000 and it was designed by a local architect, Mr. E.C. Hughes of Wokingham,

Organisation - In 1921 the orphanage was managed by a board of L&SWR staff, consisting of men from all districts, departments and grades of employment. Furthermore, the South Western network, which stretched from Waterloo to the West Country, was split up into eleven districts, all of which possessed a committee elected by subscribers and which had a secretary. The main board was formed from these secretaries and an extra representative for every 250 subscribers. This meant that the board of management constituted (and I was not going to count them) over sixty members and this was headed by an elected chairman. In 1921 the post was held by Mr D.J. Radmoore, chief yard inspector at the Nine Elms Goods Depot. In the magazine’s opinion ‘Mr Radmoore is a very keen worker for the orphanage, and is never happier than when he is joining in some scheme for the pleasure and benefit of the children.’ 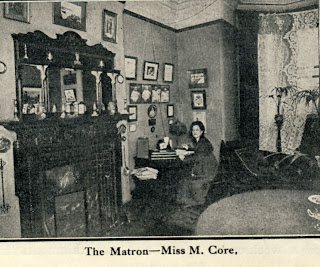 Local Committees - The orphanage’s operation relied heavily on the work of the regional committees. Primarily, they were to raise funds for it. Indeed, the formation of a new London committee in 1920 had brought over 3,800 additional subscribers and had organised many fund-raising concerts. One of the oldest committees was that at Southampton, which in the summers of 1919 and 1920 had invited the orphanage’s children to the town for the weekend. ‘Sports and entertainments’ were run, with prizes being awarded. At night the children were taken to the homes of railwaymen ‘where they enjoy every hospitality.’ Furthermore, the committees also arranged trips for the children to local attractions, such St. Paul’s Cathedral and The Tower of London, as well as staged concerts for them at the home.

Furthermore, there was also a ladies committee that co-ordinated with the matron to see to the purchasing of ‘clothing and other matters that hardly come into the province of the general house committee.’ The 'ladies' also presided once a week over a sweet stall where the children could buy ‘wholesome confectionery.’ 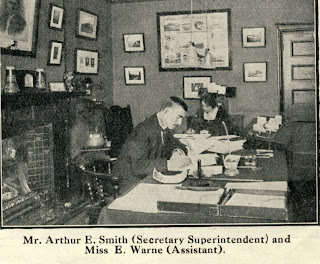 Staff – The Superintendent in 1921 was A. E. Smith, who had been previously been on the board of management.  The magazine commented that under his leadership the orphanage had been described as ‘one of the best managed in the country.’ He was supported by a matron, Miss Core, who had spent her whole life in the ‘institution world’ and had been at Woking for eleven years. Additionally, Miss Love was Assistant Matron and had been one of the first girls to enter the orphanage in 1886 when it was still at Jeffreys Road, Clapham.

The Building – This was two stories high. On the ground floor there were boys and girl’s classrooms, washing lavatories, hat, coat and boot rooms, and dining hall to seat 200 people. There were also a kitchen, sculleries and larders. Furthermore, there was a library, supported by the orphanage’s honorary treasurer, Cecil W. Carrington, which was described as ‘one of the finest in the country. Indeed, while having no link with the railway company at all, Carrington had helped raise money for ‘The Children’s Fund,’ which allowed the construction of a sports ground and pavilion. He also built the drill hall and a fully equipped carpenters shop. On the first floor there were four dormitories, bath rooms and staff rooms. Lastly, four dormitories were lcoated on the second floor, as well as the infirmary.

Work – The children's daily activities were varied. Each day the boys played cricket or football, and by 1921 the the orphanage had won four cups playing others from local schools. On the left of the building was the girls’ playground which was equipped with swings, and on the summer they played tennis and ‘other games’. However, in times of inclement weather, all the children used the drill hall in the grounds to play. Next to this was the carpenters shop, which was equipped with benches, tools and two lathes, and the boys were under the tuition of Mr Jones, an instructor at a local secondary school. Furthermore, there was a large field that was loaned to the orphanage on which the boys learned to grow vegetables.

The children were educated at a local elementary school and its headmaster, Mr E.H. Gower, took an interest in the home and was on its board of management. In 1921 four boys from the home in had obtained a scholarship to secondary school, with one girl obtaining a free place at the Girls’ Country School in Guildford to train as a teacher. In cases such as these the individuals would be allowed to stay on at the home until their schooling was finished.

Living - Each child had their own bed in a dormitory, some of which were dedicated to an individual who gave £100 or more to the orphanage. Each dormitory was overseen by a member of staff who slept in a cubical and who monitored the younger and sick children. During winter months activities happened in the dormitories before bed time. For example, ‘lantern lectures’ were given by friends, concerts were arranged, and children were provided with all they needed to study, read or play dominoes. Alternatively, on many occasions the children huddled round pianos to sing. 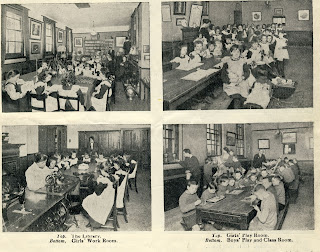 The health of the children at the home was considered good by all. This was partially because of a good diet that was considered one of the most varied of any similar institution in the country. Indeed, the magazine commented that during the shortages of the First World War the food standard was maintained and ‘in no way were the children stinted’.  The laundry was all done on site by means of hot air chambers, and a disabled ex-serviceman was employed to repair the children’s boots, a task that kept him busy all day.

‘After Care’ Committee –The magazine commented that ‘the Board of Management has given thoughtful and sympathetic consideration to the question of following up the children’s careers and conditions after they leave the orphanage.’ Thus, ‘After-Care’ committees had been set up in each district of the L&SWR’s system. As soon as a child left the orphanage, the secretary of the district in which they were going to reside was advised. He would then make periodical visits to see how they were faring. The ‘After Care’ committee then met once a quarter to review the cases and if action was required the matter would be presented to the board. However, when the children reached an certain age limit, which was not stated, they were judged to 'have been prepared morally, physically and educationally to earn their living in the world.’ They were then fitted out with an outfit valued at £30 and the orphanage’s job was then considered over. 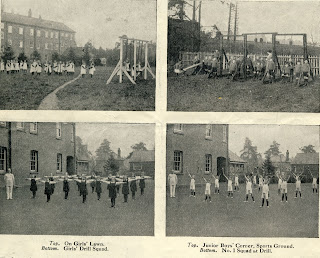 Clearly, the L&SWR orphanage at Woking was one of the best supported and run in the country in 1921. Indeed, its existence was a testament to the fact that within the railway company there was a community spirit amongst workers, managers and directors. All involved with the company cared about their colleagues and families, whether they knew them or not, and this is perhaps something we have lost in modern business.