Christian Wolmar has written frequently that one of the major causes of the railway industry's current woes, in terms of operational costs and passengers fares being too high, is the fragmentation of the industry. Britain's railways as they exist contain a myriad of private companies interacting with each other within a web of complex working arrangements, most of which force costs up. Indeed, it is accepted by most experts that separating the management of the trains from the tracks was a disaster.[1]

But fragmentation within the railway industry isn't a new issue and was addressed by railway managers in the early 1900s. In the late 1890s the railway industry's profits were depressed by a mix of poor management, competition, increasing material costs and the growth of high volume low-margin traffic (However, historians are divided on which of these factors played the biggest role). Indeed, in 1885 the industry's operating ratio, which is expenditure expressed as a proportion of revenue, stood at fifty-two per cent. By 1900 this had been driven up to sixty-two per cent.[2]

In response to their change in fortunes, railway companies attempted to reduce costs through numerous means in the first years of the 1900s;  more efficient track maintenance, better locomotive designs, new technologies and improved goods operation. Yet, despite these vigorous efforts to improve how they functioned, inter-company rivalry and duplicated services remained one of the most serious and costly issues for industry leaders. Between 1870 and 1900 the railway companies of Britain, of which there over a hundred, unsuccessfully sunk resources and capital into competing for market share on certain routes and at cities which were served by more than one company. For Example, the Great Western and London and South Western Railways had a protracted battle in the West of England, both in terms of the services they provided and through line building to gain territory. But such competition only served to depress profits, not improve them. 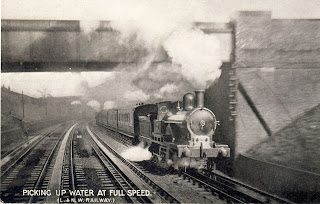 Therefore, late in the first decade of the twentieth century railway companies came together to promote economical working, eliminate competition, pool resources and ultimately reduce overheads. While outright mergers were actively resisted by government, as they would hand companies regional monopolies, railway directors and managers worked around this objection by forming 'working unions'. In late 1907 the Great Northern and Great Central Railways announced an alliance in which they pooled receipts and the management of all rolling stock, lines and works were placed under the remit of a joint committee. It was an arrangement akin to amalgamation, however, it just wasn't a legal union.

Other companies soon followed suit. In June 1908 the London and North Western and Midland Railways produced a less comprehensive scheme, where all receipts, except those from coal and coke traffic, were pooled, competitive capital expenditure was ceased and cooperative and economical train operations were sought. Indeed, this had considerable success in reducing these two companies' operational expenses. The Lancashire and Yorkshire Railway joined the agreement in 1909. Furthermore, early in 1909 the Caledonian and North British Railways drew up a very similar agreement. Lastly, in August 1910, after nearly a year and a half of negotiation, the Great Western and London and South Western Railways came to terms. [3]

While the fragmentation of the modern railway industry is different in many ways to that which existed immediately after 1900, there is no doubt that in the period knowledgeable industry leaders felt a sensible way to reduce their railway's operational and capital costs was to cooperate. Indeed, the particular success of the London and North Western and Midland Railway in reducing these forms of expenditure through unification, is a testament to the idea that when it comes to railways, collaboration, not fragmentation, can be preferable.