In my last post I talked about the frequent complaints about the service and food in railway station refreshment rooms after 1870. However, there were exceptions where refreshment rooms were considered exemplary, the most notable being those managed by the catering contractors Messrs Spiers and Pond.

Spiers and Pond was formed in 1851 when Christopher Pond, while seeking his fortune in Australia, met Felix William Spiers in Melbourne. Initially, they rented a room in the National Hotel there, turning it into a catering facility for gold miners called ‘The Shakespeare Grill Room.’ After much success, they soon looked to expand and purchased the Cafe de Paris in the city.[1] In 1858, a Professor Anderson wrote to The Era describing it:-

‘Above the bars, and over the gateway you enter, is the Café de Paris, containing a salon, far superior in decoration and appointments to any I know of among the restaurants of London, and a coffee and smoking room fitted up with as much taste and elegance as you will meet in Paris…You may dine here in as much style as anywhere “at home,” and be served with a cut from a hot joint, just as at Simpson’s on the Strand.’[2]

But Spiers and Pond's plans didn't stop there and in 1861 they paid for the English Cricket team to visit Australia. The English team arrived on Brunel’s steamer, the Great Britain, on Christmas Eve 1861 and in the following months played matches against teams from the various Australian provinces. After losing all but one game, they played their last in early May, leaving shortly afterwards.[4] Financially, the cricket team's visit was a roaring success for Spiers and Pond, and, buoyed by its success, in March 1862 they tried to persuade Charles Dickens to conduct a speaking tour of Australia for £10,000; or £5,000 if they bore all costs.[5] He declined.

Why Spiers and Pond returned to Britain and started taking over railway station refreshment rooms is unknown. However, by mid-1864 they had made arrangements with the London, Chatham and Dover Railway to run all the rooms on their line, as well as at Charing Cross Station on the South Eastern Railway when it opened. Rather than Spiers and Pond paying the railways a rent, they would receive a proportion of the profits ‘thus giving to each party to the contract an interest in the extension of the business to be done.’ Furthermore, Spiers and Pond would ‘endeavour to attract customers by the quality and price of their goods supplied.’[6] Unsurprisingly, their refreshment rooms were a great success and, consequently, arrangements were made with the Great Northern Railway for the operation of a refreshment room at King’s Cross station, and with the Metropolitan railway for the provision of services at all their stations.[7]

As part of this deal with the Metropolitan, in 1866 Spiers and Pond opened a refreshment room at the company's Ludgate Hill Station. The Era gave a description:

‘It is now decorated in the most refined taste, and divided into compartments fitted with spring, velvet covered seats, and every possible contrivance to ensure the comfort of those who may make use of it in the future. An enormous stove, oven and fireplace combined, called the “Great Grill Apparatus,” is a prominent object at one end of the restaurant…”

The restaurant opened on Monday 1 January 1866 to passengers of all classes. The publication, referring to refreshment rooms generally, commented that ‘reforms in this branch of what we may call railway administration were imperatively demanded, and these reforms Messrs Spiers and Pond have commenced in the most praiseworthy manner possible.’[8]

In the years that followed the company took over the operation of rooms all over Britain’s railways. At some point before 1882 they received the contracts for all of the refreshment rooms on the Great Western and Midland Railways. Yet, in that year the companies took them back from contractors and operated them themselves (these decisions were later reversed).[9] Furthermore, in 1888 the London and South Western Railway’s rooms were in the hands of Spiers and Pond.[10] Only a more thorough investigation, which I have not time to do, will reveal when different companies made arrangements with Spiers and Pond. However, in 1894 they were operating rooms at the ‘principal stations’ of the following railway companies: 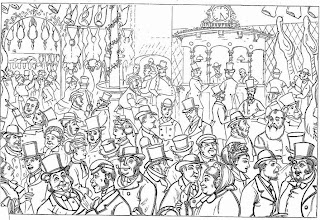 Spiers and Pond were universally praised for the quality of their services. In 1866 it was commented that they ‘maintained the highest reputation, and we sincerely trust that their efforts at reforming the system of railway refreshment rooms will meet with success.’[12] The Sheffield & Rotherham Independent in 1869 called them ‘celebrated caterers.’[13] In 1872 it was commented that ‘Spiers and Pond have earned a reputation for their good fare at moderate prices.’[14] A writer in The Fishing Gazette in 1880 commented that he ‘found everything up to the mark’ and that the ‘most courteous attention was paid to the visitors.’[15] Lastly, Spiers and Pond’s arrival in Britain was referred to in 1888 as having caused a ‘gastronomic revolution.’[16]

Therefore, Spiers and Pond refreshment rooms provided passengers with a better quality service than those elsewhere, the quality of which was highlighted in the last post. Nevertheless, what effect this had on improving the provision in refreshment rooms generally is unclear. There is a possibility that it put pressure on railway companies and other contractors to improve their facilities. However, given that most held monopolies at the stations they were serving, and combined with the evidence presented in the last post, I suspect it is unlikely.