The evolution of the British railway manager in the Victorian period isn't something that immediately peaks the interest. However the shift that managers made from being amateurs to professionals, tells us something about the way that the railway companies and business developed in Britain. Whereas early railway managers were more apt to worry about whether steam engines would explode and kill local cattle, later managers were worried about steam engines having a similar effect on cattle that strayed onto the line. Therefore the tale of the development of the professional railway manager is about a shift in the knowledge that they were utilising to run their increasingly complex businesses.

In 1830 there was no such thing as a railway manager. Of course there were people who managed railways, but there was no one in the labour market, the country, or anywhere, who had had any prior experience of running the rail. Therefore early directors, faced with some the most complex organisations that had been established in history, appointed their managers mainly from three non-railway sources. There were whose who had worked on similar businesses such as canals, engineers and gung-ho military types. In fact it was the latter that was favoured by directors. This was because the military were the only organisations where individuals coordinated more than just a smelly guy with a cart. In fact after Waterloo and the dramatic scaling down of Britain's military, there was little else for meandering ex-military men to do.

A number of studies have shown the influx of military men into the railways. Terry Gourvish, who I bet will get more than one mention in this Blog, did his PhD on Captain Mark Huish, the first General Manager of the London and North Western Railway, (L&NWR). He was late of the 67th Bengal Native Infantry (Gourvish, 1972, p.48). Michael Bonavia also noted Captain Eborall of the London and Birmingham Railway, Captain Laws and Binstead of Lancashire and Yorkshire Railway (L&YR) and Captian Coddington of the Caledonian Railway (CR). (Bonavia, 1971, p.13) In short, military men were everywhere.

My own PhD has however shown that no senior London and South Western Railway (L&SWR) managers that I know of did any form of military service (trust it to be different) .There was Albinus Martin, the first 'General Superintendent,' who was an engineer and helped build the company's first line between London and Southampton. There was also the scallywag, Cornelius Stovin, who was a failed stagecoach proprietor and in 1852 saw fit to run off to the United States, taking some cash with him (never to be seen again). What this shows is that while in some respects some early railway managers were trained professionals in other fields, especially the engineers, in general they were a mixed bag of individ 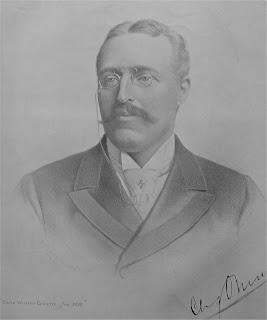 uals who directors were forced to employ because their was no other option.

By the end of the 19th century a dramatic change had occurred. In 1898 the London and South Western appointed their third General Manager, Charles Owens (Shown). He was the personification of the late-Victorian career railwayman. He had started with the company in 1862 at the age of 16 as an apprentice Clerk in the Audit Office. He had moved gradually through the ranks to clerk, chief clerk and then Goods Manager in 1888. 10 years later he was appointed General Manager of the company, a post he would hold until 31st December 1911. What Owens' career demonstrates is that the nature of the railway manager had changed dramatically. No longer were directors appointing a misfit bunch of individuals to run their operations, now they had a they plethora of long-standing and experienced railway employees who knew the lay of the land.

Evidence from my PhD therefore shows a change in the age at which managers started with the L&SWR. Of twenty eight L&SWR managers that began their careers in the period 1839 to 1859, 42.8% started between the ages of 20 and 60 and therefore must have worked in other businesses. Indeed its seems that before 1870 the L&SWR did a fair amount of poaching railway talent from companies allied to their business. However in the period 1860 to 1879 only 11.7% of 34 managers began their careers after the age of 20 and after 1880 none did. Boring as these statistics are they do show that management was increasingly being populated by individuals who had started with the railway in their teenage years and thus had had their entire career within the industry. Further to this all the managers had careers on the clerical promotional ladder, moving from junior (or apprentice) clerks, to clerks, then chief clerks or station masters and then being appointed to middle management. Overall only 3 out of a sample of 70 managers started with the L&SWR in non-clerical positions such as porters, inspectors or ticket collectors. Therefore it can also be said that the majority of managers had only followed one type of career path.

Therefore there is a binary character to railway management in the late Victorian period. On the one hand you had senior and middle managers who knew the ropes of the railway industry well, had vast experience and had worked their way up from the bottom. The problems of recruitment in the earlier period had been dispelled as no longer were directors forced to search outside the industry for managers who were hard to find and whose trustworthiness could not be assured. On the other hand however most managers in the later period only had experience of one industry and one career path, which may have led to managerial institutionalisation. In an effort to solve the problems of early managerial recruitment by favouring internal appointments, it is possible that directors and senior management created an environment where innovation and new ideas were uncommon as no 'new blood' was entering the railway industry. This subsequently may have affected the performance of Britain's railway companies in the late Victorian period.