Waterloo isn't what it used to be


Waterloo is a dump! There I said it. We can of course applaud the cleaners, I didn't see one Metro or Evening Standard dumped floorward today. I did see plenty loitering the train. In fact in a bit of a tangent I think it is weird that Network Rail get a good cleaning job done at Waterloo, while South West Trains clearly don't give a shit about the carriage interior. Different priorities I suppose...anyway

I think that the problem with Waterloo is that now the romance has gone. If anyone has seen the 1961 John Schlesinger film 'Terminus: 24 Hours in the Life of Waterloo Station' they will know what they I mean. Since the station's building in 1848 (with the current station being the product of a re-build between 1900 and 1921) there has always been the bustle of commuters, and the film expertly portrays individuals going to their varied occupations. Yet what I think has changed is the fact that people don't interact with the station in the same way. The film expertly portrays the station as a social arena, where drinks were served, meals were sat and eaten and lovers came together and spent time talking. Now people drink on the move, the meals are over-salted and speedily scoffed, and I see most people arguing, yelling, or moving so fast that others nearly topple like dominoes. Waterloo is now one part in people's a-b-c lives and not an interactive part of it. In short the station experience, while still essentially still about travelling and meeting, has sped up.

The biggest indicator of the 'quicker' station experience are the barriers, designed to catch those devious travellers who were moving in too fast to buy a ticket. Pesky, ugly and unnecessary is my opinion. Oh the Train Operating Companies love them so much that I bet they get aroused by the mere site of yellow circles and flashing lights. I bet every time they see one open they can just hear the money jangling into their pocket. Of course this poses problems for the majority of travellers that are 'honest.' They place anyone who previously would have very willing pay for their ticket on the train or those who make simple errors with regard to ticket buying, in the category of a fare dodger. For all those who fail to have a ticket the mantra is now no ticket...no excuse - you are getting a fine. This is a problem especially prevalent on South West Trains where many stations have been equipped with barriers, most notable amongst them being Waterloo.

Are these revenue-generating, money sucking, fare evasion instalments worth it? No. As Richard Malins at 'Transport Investigations' has just commented in the latest issue of RAIL magazine, they are only profitable at larger stations because of the extra cost of st 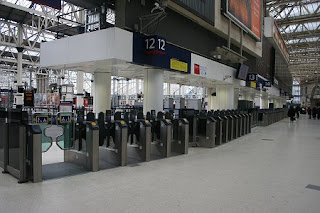 affing them at the small ones. Thus all the Train Operating Companies have done in their efforts to slow the public down, catch fare dodgers and claim the money that is (rightly or wrongly) there's, is that they have dehumanised the travel experience and set them selves up for grief with their customers. Would it be terrible if at that at the cost of a few dodged fares and turning a blind eye to the errors of the travelling public they could have fostered good customer relations? In truth at the end of the day they just pissed us off, but then again they are monopoly Train Operating Companys with no others to challenge them. Thus this goes to show, in my opinion, that they don't really care about customer relations at all, rather bleeding our pockets dry is all that matters.
Posted by David Turner at 22:35