Lost Documents from railway's past 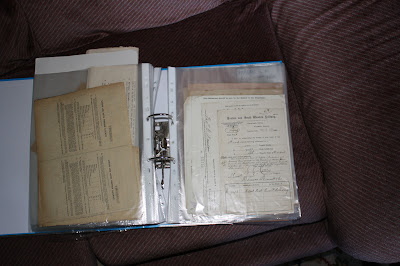 I thought that as I had collected so many documents from the history of Britain's railways that I would knuckle down and sort them out. Oh dear. I hadn't realised how many I had in my collection. I think we are looking at 100s of individual items, ranging from luggage labels through to policy documents, from instructional circulars to timetables. With it all laid out on my floor it all looked like a mess, although one of those messes where you know exactly where everything is. I realised I did not have time to sort and catalogue everything, so I decided to organise my largest collection. For any regular readers of my blog you can probably guess that this was my collection of London and South Western Documents, of which I have 100s.
As I went through the collection I noticed there is a distinct pattern in the material that has come into my possession through various means (ebay being the main culprit). Within a large organisation such as the L&SWR there were three main types of communication that occurred. Firstly, communication flowed from management down the organisation. On the L&SWR this was in the form of rule books, circulars, instructions, appendices to the Working Timetable and letters. Secondly, there was 'horozontal' communication between locations on the network, for example between stations, yards and offices. Some examples include letters, telegrams, train messages, waybills and wagon labels. I have plenty of documents that are examples of downward and horizontal communication. This isn't surprising though, as such documents are abundantly available on ebay and at ephemera fairs. Just have look at the 'paper ephemera' category on ebay (under Transportation and then Railwayana)
Yet, there is one flow of information from which I have very few documents. Communication up the organisation was vital to the functioning of the company. Information flowed from the station master, guard or engine driver to the management, it was then collated and strategic decisions regarding such things as investment, train times and efficiency were made. So documents that were used would include staff timesheets, station traffic returns, guard's report books, fuel usage forms and stores request forms. Yet, I have few documents of this nature, the sole examples being some unused forms for the hours staff members worked and a guard's report book. It is not very impressive really. 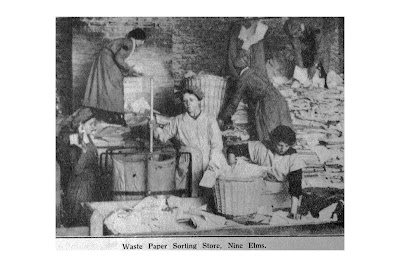 The reason for this disparity between how much material I have from each of the three directions of communication is simple. I have lots of material that ended up at stations, yards or offices around the L&SWR's network because these were places where they could be saved (or lost) easily. Imagine a absent minded clerk placing something in a draw and forgetting about it, a station master who knocked a form down the side of the desk, or even a porter who took his Rule Book home when it was superseded by a new one. It is these people's documents I have. But, a book that listed who worked at a station, or how many wagons passed through another or how much oil they used at a locomotive shed, went up the organisation to be assessed in a main company office and therefore took up space. This is why I have posted the two images above that were published in the South Western Magazine in 1917. They clearly show large data books and 'waste paper' being disposed of systematically. Once the information contained within had been extracted, the medium through which it came to headquarters was disposed of. Hence, this is why I suspect that the vast majority of these documents are missing from the railway ephemera market, and why I have only unused examples of upward forms of communication.
Thus, this is probably why many questions regarding the efficiency and performance of Britain's railways in this period may never be answered as location-specific data is scarce.
Posted by David Turner at 09:31