In July and early August 1911, railway workers in various parts of the country, dissatisfied with the working of conciliation boards, unofficially went on strike. In the railway worker’s minds, the conciliation boards had been ineffective at raising wages and reducing hours, as the railway companies had found ways around the awards. Indeed, many of the railway workers had nicknamed them ‘confiscation boards.’ [1]Both Pollins and Howell argued that the root cause was because groups of railway employees, particularly in the , were inspired by two recent large and successful strikes that occurred amongst dock and shipping workers.[2] ‘As workers in other industries began to strike and to secure some advances, so railwaymen became even more impatient about the conciliation scheme.’[3]

Some of the first strikes were among Midland Railway workers who unofficially came out on in early August demanding increased pay and shorter hours. However, the action that had started in Liverpool soon spread to and other parts of the north and midlands, as well as other railway companies such as the and North Western and Great Central railways. Indeed, Howell argued that the interaction between workers of different railway companies allowed these unofficial actions to spread.[4] Overall, while the precise number of workers who struck is unavailable, approximately 50,000 railway workers in were on strike before union leaders got involved.[5]

On the 15th August in Liverpool, around which the storm was now blowing, between 40 and 50 delegates from four of the five railway unions met. The delegates came from the Association of Locomotive Engineers and Firemen (ASLEF), The Amalgamated Society of Railway Servants (ASRS), the General Railway Workers Union (GRWU) and the United Pointsmen and Signalmen's Society (UPSS). Only missing, were representatives of the Railway Clerk’s Association (RCA). The first resolution they passed laid out their issues with the conciliation scheme: - 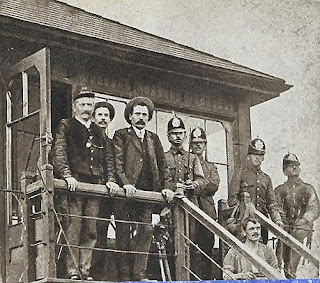 ‘We hereby declare that this unfortunate condition of affairs has been created largely by the vexatious attitude of many of the railway companies towards the working of the scheme of conciliation and arbitration, agreed to in 1907 by the Board of Trade and the railway companies and this society (The Amalgamated Society of Railway Servants).’

The delegates then issued an ultimatum, and agreed:

‘…to offer the railway companies twenty-four hours to decide whether they are prepared to immediately meet the representatives of these societies to negotiate a basis of settlement of the matters in dispute affecting the various grades.’[6]

Nervous about the country shutting down, and keen to avoid a strike, the government stepped in. Firstly, Asquith invited a number of railway managers to a meeting to discuss the issues, assuring them that they would be given all the support necessary to continue services as normal.[7] Indeed, Asquith declared that he would ‘use all the civil and military forces at his disposal’ to make this happen. [8] This was followed by a meeting between representatives of the Board of Trade and union officials, at which the latter laid out their grievances. Firstly, there was the long-standing complaint over the conciliation scheme, but they also demanded recognition by the railway companies. In essence, the unions had used the situation, which had not been created by them, to push this second agenda.[9]

The suggestion proffered by Asquith was the formation of a Royal Commission to investigate the workings of the conciliation scheme. The unions, worried about how long the commission would take to report and the fact that there was no guarantee that they would be recognised, rejected this offer. Thus, on the evening of the 17th August 1911, the government and railway management’s worst fears were realised. The Times reported that ‘last evening the unions issued telegrams to all their branches ordering the men to cease work immediately. The thousands of men on strike were promptly joined by many thousands more.’[10] In response, and with a view to keeping its promise, the government deployed 58,000 troops across the network at key points, such as junctions, stations and signal boxes. In the concise words of Bagwell, ‘the strike was effective.’[11]

The strike didn’t last long, and only about 200,000 of the country’s 600,000 railway workers struck.[12] Indeed, on the and South Western Railway only two members of the staff went on strike,[13] highlighting the fact that in many cases strike action was about localised disputes, rather than nation-wide injustices in employee pay and conditions. Further, it emphasised that union leadership had, not unreasonably, hijacked the unofficial strikes to make a bid for recognition in the eyes of the railway company managers.

Recognition came, in a non-official sense, on the 19th August when for the first time the government brought together round the same table union officials and railway managers. Shortly after, the unions instructed their members and all others on strike, to return to work. The unions also accepted Asquith’s proposed Royal Commission to look at the conciliation scheme. In truth, nothing much had changed and the unions had basically accepted the scheme offered on the 17th August. Thus, this suggests that they wished to show the government and railway companies what they were capable of.

Therefore, the strike of 1911 was only a minor ‘blip’ in the smooth running of ’s railway network. However, it was vital in the step towards railway companies acknowledging the existence and place of the unions within the industry. In truth, nothing much had changed, however, the unions had demonstrated their strength to act and the railway companies and government could no longer just fob them off with ad hoc arrangements and a lack of recognition.

In part 3, I will look at the immediate aftermath of the strike, the revised conciliation scheme, and the creation of Britain's first all-grades union.