The Lives of Late-Victorian Railway Clerks

Late-Victorian railway clerks were pen pushers, who at stations, yards and offices did a range boring and tedious jobs, such as filling out traffic returns, processing correspondence, handling money and ordering stores. Monotonous as these tasks sound, clerks’ career opportunities, high wages and job security made them a unique and fascinating group of railway employees.

By the 1870s railway companies were employing boys between the ages of 14 and 19 as junior clerks, usually appointing them to the traffic or the administrative departments. However, gaining a situation as a junior clerk was dependent on a number of factors. Firstly, before even setting foot in a railway office, prospective clerks would have been required to provide security and present testimonials written by respectable individuals who could attest to their good character. Secondly, the majority of railways expected these individuals to pass exams, which, in the case of the London and South Western Railway (L&SWR), included tests on 'writing, spelling, copying and common arithmetic.' Therefore, because of the necessary connections, money and education to become a junior clerk, it is clear that the majority would have had middle class backgrounds. 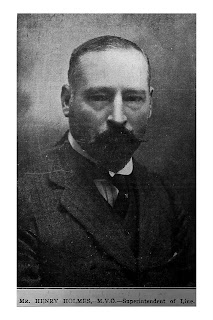 Once they had passed these rigorous entrance procedures they immediately received benefits, starting on higher salaries than other railway employees. In 1877 William Pratt, a new cleaner at the L&SWR’s Nine Elms engine shed, earned £15 12d per year, whereas in 1878 Henry Holmes (shown), a junior clerk at Lapford Station, began on £35 per year. Further, clerks’ wages were raised at a quicker rate than other staff, and in 1890 Pratt was on £93 12d per year, whereas by 1891 Holmes, now based at Superintendent of the Line’s Office, Waterloo, was on £125 per year. In addition to these benefits, the clerks, who were paid monthly, could boast of having higher job security than other staff, the majority of which were only paid weekly and could be dismissed easily.

Yet, despite the advantages over other staff in their pay packet, clerks’ work was long and arduous, and usually in poor conditions. A Chief Clerk on the North British Railway in 1863 recounted that while the working day may have officially been between 9.15 am and 6 pm, clerks in reality were expected to get through their assigned work whatever, forcing many stay in their offices until 7, 8, 9 or even 10 pm. Some even took their work home with them.

But efficiency and a high level of commitment could pay off, and industrious clerks were usually rewarded with advancement up the companies’ clerical promotional ladders. The natural course of advancement for junior clerks was to be confirmed as a full clerk after three to five years of training. Then, after variable periods of time depending on their aptitude, they may have become chief clerks, goods agents or station agents. Once reaching this level, they still may have been promoted further, moving to larger and larger offices, yards or stations. But, even greater rewards awaited these men if they continued to impress.

By the 1870s clerks were the only railway employees that in reality could be promoted into the ranks of management. Indeed, a small number rose to be General Managers. In the period 1870 to 1909, Gourvish showed that of 43 General Managers appointed within Britain’s fifteen largest railway companies, 40 had begun their careers in Traffic or Administrative departments. Indeed, the previously mentioned Henry Holmes eventually became the L&SWR’s Superintendent of the Line. Only in exceedingly rare cases did non-clerical staff get promoted to this level within railway companies.

Therefore, while undertaking the dullest and most boring work within the late-Victorian railways, I feel that the clerks were an interesting group of individuals, whose advantageous backgrounds ensured they had better jobs, good career prospects and a happier living.