Lets get this straight, by the 1990s British Rail was very efficient!

On Monday I watched the despatches program that everyone is talking about that criticised the modern railway network ('Journeys From Hell', Channel 4, 21 March 2011). Boy, did I get frustrated. I wasn’t particularly concerned with the lack of decent analysis, nor with the dominance of subjective opinions. No, as a historian of the railways I got annoyed with the words of Steven Norris, one of the architects of British Rail’s (BR) privatisation in the early 1990s. In his view, BR was an inefficient and lazy organisation that did not give the taxpayer ‘value for money.’ Furthermore, he asserted that privatization was the only way to solve its internal problems. While I acknowledge British Rail did have a long history of inefficiency, what annoyed me was that this opinion flies in the face of all the evidence. By the 1990s BR was, by all reasonable measures, one of the most efficient railways in Europe. This post is about bursting Steven’s annoying little bubble. All figures are taken from the highly detailed official history of British Rail by Terry Gourvish.

Firstly, a bit of background is required. From 1982 onwards the government shrunk BR’s budgets. In 1982 central and local government funded BR to the tune of £1330.8 million (constant at 1989/90 prices). By 1986/87 this had shrunk to £950.8 million, and by 1989/90 the total funding was £568.8 million.[1] This reduction forced BR to become more customer focussed and led to a massive reorganisation of the company, named ‘sectorisation.’ Most importantly, it forced BR to become a more efficient organisation.

If we consider that Britain's railways since the 1940s had never made overall profit, and consequently always required a subsidy from government to fund their operations, the level of loss that BR incurred in the 1980s and 90s would be indicative of the performance of the business. The central principal for BR operations under sectorisation was that the profitable parts of the business, such as Intercity, would actually reduce the burden on the taxpayer as they would mitigate losses incurred by other sectors that were loss-making, such as Regional Railways. The table below shows the profit and loss of BR's different operational sectors in certain years, as well as its overall total.

As shown, in 1982 Intercity, Railfreight and Network South East were all poor performers, with only Railfreight making a slight profit. However, all three became far more profitable by 1993/4, whether it be through cost control, greater efficiency, growing their trade, better public service or increasing their fares. Only BR’s Parcels service and Freightliner, the latter of which was a relatively new part of the business, did not improve their performance by 1993/4. Furthermore, Provincial and Regional Railways, which ran local and county lines and were  cross-subsidised by the other BR sectors, also became more efficient by 1993/4. Overall, the result was that by 1993/4 the BR's burden on the taxpayer was £724 million less than in 1982, which constituted a reduction of 73.21 per cent.

Additionally, most elements of BR’s costs reduced in the period. As an example I will look at maintenance costs, which declined significantly.

The table above indicates that between 1983 and 1989/90 BR’s maintenance costs dropped by 19 index points. However, the cost per train mile, which essentially relates BR's overall expense to the amount of work done by the organisation, fell significantly by 24 index points. While some of this reduction could be down to changes in the price of materials, there is no doubt that some, if not most, could be attributed to better cost control, improved operational practices and better project management.

But how did BR's efficiency compare with that of other European operators? The table below shows the number of kilometres BR’s trains ran per member of staff in the period, against the average for the fourteen 'Community of European Railways' members (excluding BR). 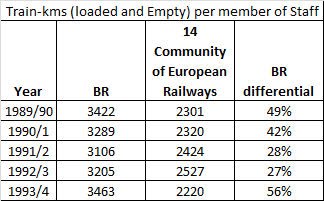 Evidently, per staff member BR’s trains went further than those of European operators. This was despite, in some cases, the British railway network being of a higher density than in many countries and requiring greater maintenance, more administration and having greater intensity of train movements. This means that BR was more productive per staff member than the European operators and British taxpayers were getting better ‘value for money’ from its operations.

Lastly, because of efficiencies, the level of support that BR recieved from government also reduced over the period. The table below indexes the funding of British railways against three major European operators between 1975 and 1991. 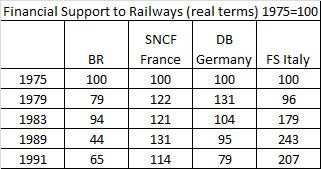 While the funding of French and Italian governments' funding of their railways increased over period (Italy  by a substantial amount) the German and British Governments reduced theirs. However, BR's superior performance is shown by the fact that the German government’s funding of Deutsche Bahn rose in the late 1970s, falling off in the early 1980s; whereas BR’s funding was reduced overall, reaching its lowest level in 1989. Indeed, of the four operators above, BR had had the least success in securing government funding over the period. Thus, this data indicates that BR was, at the point it was privatised, highly efficient in compared to European railways.

Therefore, Terry Gourvish’s figures have shown that in the 1980s and first half of the 1990s BR improved the profitability and performance of its business, reducing the burden on the taxpayer. By the mid-1990s it was one of the most efficient railway operators in Europe, if not the most efficient. Of course, I have only scratched the surface of what actually went on within BR after 1980, and its story in the period was not one of unabated progress. Yet, this data shows that claims by Steven Norris (and others) that BR was inefficient in the 1990s are just plain wrong. Indeed, if privatisation hadn't happened there is no telling how efficient or productive Britain's railways may have become after 1997.

If you would like to read more about BR's business, I would really recommend Terry Gourvish's book.