Waterloo handled 86,397,666 passengers in financial year 2009/10, making it Britain’s busiest railway station.[1] Yet, Waterloo has always been one of Britain’s busiest stations. The structures that make up the current Waterloo Station complex were the product of the London and South Western Railway (LSWR) rebuilding of the station to cope with the massive increase in passenger traffic after 1890. Yet, the station that stood before the current incarnation looked very different. It was a mess, actually consisting of three stations with three nick-names.

Waterloo Bridge Station, as it should be more accurately known, was built because in 1839 the LSWR's main line did not reach London, its first terminus being at Nine Elms. Yet, the LSWR was determined to strike reach the city, and in 1848 the company opened their new line to Waterloo Bridge. As Colin Chivers and Philip Wood have commented, this new station was never intended to be a terminus, nor the great station that it became. Indicative of this, an original plan (which I cannot reproduce) shows that 3 of the 6 lines went through the station and into the back wall, so as to allow easy extension to the city or Southwark.[2] Yet, the hoped-for extension did not happen and Waterloo quickly became the point on which all LSWR operations were focussed. The first major alteration to the station came in 1860 when four more platforms were built on its north side, bringing the total to 8.[3] Through various alterations this number had risen to 12 by 1878.

After 1870 the number of passengers that the company carried on its line, particularly on its suburban routes, began to increase rapidly. In 1870 the LSWR conveyed 13,387,357 passengers, in 1875 this had risen to 20,998,310 and by 1880 30,294,406 people travelled with the company. This was an overall increase of 126.29%.[4] I have commented in an earlier blog post that this put a strain on the company’s services and about the many complaints were directed against the management as a result (Found Here). But, with such an unexpected rise in the level of traffic it is unsurprising that the management of the LSWR was caught unawares. Thus, in 1874 the LSWR's directors decided to act. While an aspect of their plan was to add an extra line between Clapham Junction and Surbiton,[5] they predominantly focussed on the bottle-neck at Waterloo Station. Here many trains were kept waiting outside the station as there were insufficient platforms for the ever-increasing number that were scheduled to cope with the rising traffic.

However, without an accurate way of predicting how traffic would grow, the extension of Waterloo Station from 1874 onwards was a very ad hoc affair, that reflected that the LSWR managers were simply reacting to the business environment and had no way of knowing what the future would bring. In 1874 the company submitted in its bill of that year a plan to ‘widen and improve’ Waterloo station on the south side.[6] Opened in December 1878, the new ‘South’ station was entirely self-contained, having its own booking office and taxi yard. Crucially, it added a further two platforms to the Waterloo complex.[7]

Continued traffic growth in the 1870s meant that soon after these new platforms opened the extra capacity it provided was deemed insufficient to cope with ever-rising train movements. Thus, in 1881 the company submitted a further bill to parliament for another extension of the station on its north side.[8] Opened in stages in 1885, this new ‘North’ station added a further six platforms to the station, bringing the overall total to 18.[9] This was also technically a separate station and had its own booking office and taxi yard 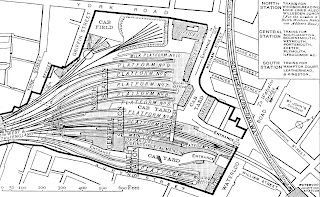 
The result was that after the adaptations of the original station in 1878 and 1885 passengers were left with a confusing three-part station. Subsequently, when Jerome K. Jerome wrote his book Three Men in a Boat in 1889 the following was said of the station:- “We got to Waterloo at eleven, and asked where the eleven-five started from. Of course nobody knew; nobody at Waterloo ever does know where a train is going to start from, or where a train when it does start is going to, or anything about it. The porter who took our things thought it would go from number two platform, while another porter, with whom he discussed the question, had heard a rumour that it would go from number one. The station-master, on the other hand, was convinced it would start from the local.”[12]

Furthermore, the LSWR itself did not help to decipher the Waterloo complex for its passengers as the 18 platforms had only 10 platform numbers.[13]