On the 9th of June 1865 at Staplehurst an accident occurred that went down in history. This wasn’t because it was one of the most horrific accidents in British railway history, although 10 people died; nor was it because it was the first major accident. It was famous because one of its passengers was Charles Dickens. Dickens had been travelling with his mistress Ellen Ternan and her mother in the first class compartment of the South Eastern Railway’s (SER) 2.38 am boat train from Folkestone.[1]


The accident occurred on the viaduct over the ‘muddy stream’ of the River Beult. Over an eight to ten week period the engineering team, consisting of 4 carpenters, one labourer, 3 platelayers and one foreman, were replacing the viaduct’s baulks (basically wooden timbers) which were placed between the iron girders to hold the track up. These were to be replaced during the passing of passenger trains, and up until the end of the project everything ran smoothly with train services passing without incident.

SER company regulations stated that fog detonators placed on the tracks at 250 yard intervals up to 1000 yards from where the engineering works were to protect them. At 1000 yards a flagman was to also be placed. However, on 9th of June the foreman of the Beult viaduct works, John Benge, had not ordered the detonators placed and the flagman was stationed only 544 yards from the works. This disregarding of the rules was compounded by the fact that Benge had failed to read his timetable accurately. Because the boat train was left Folkestone dependent on the arrival time of the steam packet, which was determined by the tide, this meant that each day it arrived at different points along the line at different times. On the 9th June, Benge expected to arrive at the time stated for the 10th, which was two hours earlier and subsequently his team had started to remove two tracks. The result was that when the train arrived at the viaduct the driver saw the flag too late and was unable to stop the 13-carriage train in time. 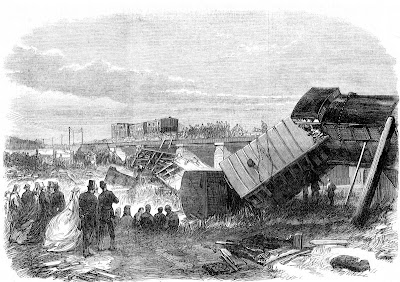 What happened next would shape the rest of Dickens’ life. Firstly, the locomotive, tender and leading break van managed to cross the viaduct on the beams. However, the tender broke the viaduct wall. The second class carriage directly behind stayed on the viaduct, while the first class carriage, in which Dickens and his party was in, came to be lodged precariously halfway off the viaduct. The rest of the carriages went over the side into the stream. Dickens, went to the aid of the victims and described in a letter to Thomas Mitton four days later what he had saw: ‘no imagination can conceive of the ruin of carriages, or the extraordinary weights under which people were lying, or the complications into which they were twisted up among the iron and wood, and mud and water.’ He received praise for his actions, however, because of his travelling companions he shied away from the limelight.[2]

Most commentators point to the fact that this accident had a profound effect on Dickens’s health, and no one can deny that it did. Dickens had, as Ian Carter states, the ‘ominous signs’ of post-traumatic stress disorder thereafter. He refused to travel by express train, and always opted for the slow trains. Indeed, it is said that he never recovered from the shock of the accident and he died five years to the day after it on the 9th June 1870.[3]

However, what is not so commonly known is that after 1865 Dickens pushed more vehemently the issue of railway safety, particularly improved signalling. In a letter a month after the accident to the author Bulwer Lytton, he stated that the railways of Britain had developed an ‘enormous no-system,’ which had ‘grown up without guidance…Its abuses are so represented in Parliament by Directors, Contractors, Scrip Jobbers, and so forth, that no Ministers dare to touch it.’ Indeed, because of this lack of responsibility amongst railway officials and their presence in parliament, those to blame for such accidents were protected. [4]

Dickens’ primary concern was the idea that knowledge was so crucial to the safe working of the railway and he believed that this aspect of the railways needed improving. Thus, Dickens’ magazine All Year Round featured an article on the highly advance signalling system at Victoria Station and particularly a signal box that was referred to as the ‘hole in the wall.’[5] Furthermore, his collection of short stories from 1866, Mugby Junction, featured a story called the Signalman, where a ‘disturbed and isolated’ signalman was killed by a train after seeing a ghoul who had warned him previously about two other deaths (see my last blog post HERE).[6] Thus, the story addressed the idea information systems failing and causing accidents.

The effects of Dickens’ activities (amongst others) on safety are hard to pin down. However, it wasn’t long after the Staplehurst accident that Acts were passed by government on block signalling (1871), interlocking points and signals (1873) and Automatic Vacuum Brakes. (1878)[7] Thus, while it wasn’t Dickens voice alone that forced through these changes, he can be said to have been important in raising the profile and disseminating knowledge about issues of railway safety amongst the public. Indeed, he eventually became a voice that reflected the public’s concerns that were rife at the time. He did this so the fate of those listed below, the victims of the Staplehurst accident, occurred less frequently in the future to others.