From December 1885 to March 1886 the London and South Western Railway’s staff magazine, The South Western Gazette, published each month a breakdown of the gross receipts of Britain’s major 14 companies for the previous four weeks. Why they did this is uncertain, however, the statistics do make for interesting reading and tell us some things about the nature of the British Railway industry at a single point in history. In this post I will look at the statistics for the four weeks ending 20th March, 1886, (for some railways the statistics were up to the 21st) and discuss what they reveal about the relationship between company revenue, mileage and traffic.

However, interestingly, the NLR generated the most gross revenue per route mile on the list, and for each one the company made £665. This was followed by the Metropolitan Railway, whose every rout mile earned it £566, and then the MDR, which earned £548. However the two largest railways in the country, the GWR and the L&NWR only earned £52 and £92 per route mile respectively. Indeed, the GWR was the worst performing company in this respect, an honour it shared with the London and South Western Railway, who also earned £52 per route mile.

The reason for the NLR, MDR and Metropolitan’s tracks earned the most revenue was that these companies served the London district. The Metropolitan and MDR in March 1885 seemingly did not carry any freight traffic, yet, served the densely populated areas of central, South West and North West London. Thus, over their small networks they hauled vast numbers of passengers commuting to and from work daily. The same can be said of the NLR, however, they were also graced with considerable through freight traffic going from the north of the country to the south. It should also be noted that these three railways also ran some services over other companies’ lines. Thus, their revenue per route mile may have been inflated, and if the revenue they earned per route mile they operated was calculated, the figures may have been lower.

This said, these figures would have been still high in comparison with the worst earners per route mile. The North Eastern Railway earned £50 per route mile,* whereas the L&SWR and GWR only earned £52 per route mile. Indeed, all three companies had lines that covered sparsely populated areas. Indeed the same could be said of the Great Eastern Railway (GER), which earned £62 per mile, and the London, Brighton and South Coast Railway (LB&SCR), which made £61* per mile.

There could, therefore, be an argument that main line railways which principally carried passenger traffic generally earned less per route mile. Four Railways fell into this category. 73.72% of the London, Chatham and Dover’s (LC&DR) revenue came from passenger traffic, as did 66.78% of the LB&SCR’s , 64.16% of the South Eastern’s (SER) and 61.77% of the L&SWR’s. Yet there is considerable variance between how much they earned per route mile, which were £103, (which was calculated erroneously by the individual compiling the statistics - many thanks Jeremy for pointing this out) £61, £73* and £52 respectively. Therefore, the two railways that served South East London and Kent, the SER and LC&DR, benefited from serving commuter areas and densely populated countryside. Indeed, the LC&DR earned the second highest gross revenue per route mile of the companies listed.

Similarly, there is variance in the gross revenue earned per route mile amongst the railways that made most of their money from goods traffic. The MS&LR earned 78.045% of its revenue from goods traffic, the MR’s proportion was 76.51%, the North Eastern Railway (NER) earned 70.73%, the L&NWR generated 67.71% and the Great Northern Railway’s (GNR) proportion was 67.31%. Nevertheless, of the five the NER generated the lowest amount per route mile, earning only £50*, whereas the MR earned £106. Thus, having large proportions of freight traffic did not necessarily equate to companies naturally earning more revenue per route mile. However, the total revenue per route mile of these ‘freight-dominated’ companies was £82, whereas for the four ‘passenger’ companies it was only £64.

This is an obvious thing to state really, but this evidence shows that the revenue earning capacity of each company per route mile was dependent on how densely populated or industrialised the area they served was. Indeed, clearly, what they hauled was less of a factor. Consequently, it would be interesting to see whether different management techniques, styles and structures within railway companies developed dependent the different population and industry densities they served.

Additional Note 24/07/2011: As has been pointed out by Jeremy (and many thanks), the gross revenue earning potential is not necessarily the same as profitability. Thus, for this to be determined, more information on the companies' costs and traffic levels has to be found. Victorians, as I have repeatedly discovered, sometimes showed to the public very basic ways of measuring of the revenue earning power of their companies. Thus, this is simply one example where the full information is not present. As I have the Board of trade returns for 1886, this may be a project in the future.

Furthermore, the figures were calculated incorrectly in a number of cases, and where a figure is marked with a * it is the correct figure, rather than what was printed in the text at the time. 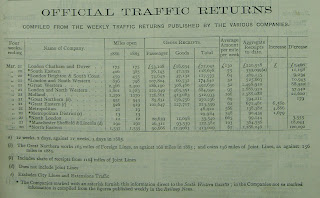