How to Become a Victorian Railway Clerk

Researchers are almost unanimous that within 19th century railway companies there existed two tiers of railway employment. In the top tier were the clerks who were involved with the primary or clerical labour market. It was hard to enter this labour market, but once in, clerks had good promotional prospects, job security, good pay and a monthly salary. In the second tier were the rest of the staff, including signalmen, porters, carriage cleaners and, to some extent, drivers. Paid weekly, and with limited advancement opportunities, these employees were highly susceptible to being dismissed at a weeks’ notice.

The two tier system of railway employment was not established because of the emergence of the railway industry. The reality was that it was a product of employment structures that existed before the railways came into existence. Anderson argued that generally before 1870 clerks were separated from the mass of labour as a result of their better education.[1] Attwell agreed with this, arguing that the early Victorian clerks had skills in ‘literacy, arithmetic up to vulgar and decimal fractions.' Both agreed that because their education, clerks 'stood above the manual worker' in the years before and after railway companies were established.[2] For early railway managers it was, therefore, logical to appoint clerks the early station masters. Indeed, many railway companies dubbed them with the title of ‘station clerk.’[3] As the railway industry developed, so did the clerical hierarchies. Subsequently the posts of junior (or apprentice) clerk and chief clerk soon evolved so that companies were able to cope with increasing business. 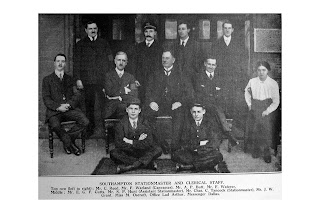 McKenna argued that railway clerks between 1830 and 1870 were required to have 'sharp intelligence.'[4] Kingsford supported this, arguing that Junior Clerks in the same period were to be respectable and possess 'adequate education.'[5] Yet, a good educational level was only a basic requirement to becoming a clerk, and in the first 30 years of the railway industry the application process became increasing difficult. The London and South Western Railway (L&SWR) was no different, and potential clerks had to pass over an increasing number of hurdles. In the early days of railway operation L&SWR directors personally appointed clerks of all ages.[6] All that was required was that the prospective clerk had a contact within the company. In September 1842, Mr Godson, a clerk in the booking office at Nine Elms, recommended through Mr Stovin, the Traffic Manager, that an unknown 'lad' be appointed as an apprentice clerk.[7]

But the process of becoming a clerk had drastically changed by 1860. In November 1849 the board established a recommendation book in which all candidates for employment (clerical and non-clerical) were to be entered by directors. From this book directors would then recommend individuals for vacancies. However, it was then for the heads of department to choose from these recommendations who would fill the vacancies within their departments.[8] Since the institution of the nomination system in 1840 heads of department had been responsible for monitoring the quality of the staff once employed.[9] However, this minute evidences that the directors were placing more the onus for quality of new staff on the heads of department.

Further to this, by the 1850s the L&SWR had introduced probationary periods of between two and six months for new clerks.[10] Probationary periods were also introduced on the Great Western Railway by 1864, as attested to by Ernest J. Simmons in his memoirs.[11] Yet, the biggest change in the application process came on the 2nd February 1860 when prospective clerks were to be tested in 'writing, spelling, copying and common arithmetic.'[12] Indeed, it seems in this respect that the L&SWR was ahead of other companies, and by 1864, Simmons does not note that on becoming a clerk he had to take an exam. [13]

The increased number of hurdles over which potential clerks had to jump were instituted in response to a number of factors. In the period railway workforces expanded because of the increasing size of the industry, and between 1847 and 1860 the numbers of clerks employed by the L&SWR rose from 135 to 268.[14] Subsequently, the twelve directors of the L&SWR could not monitor each application for clerical situations in the late 1840s and 1850s as closely as earlier in the company’s history. The result was that the board increasingly lessened their personal role in monitoring the quality of junior and apprentice clerks by formalising the nomination system, shifting the responsibility for quality control onto the heads of departments and instituting exams. Indeed, this change had occurred within most railways by the 1870s, and most railways had developed a similar clerical application process.

The described process mimics changes in power structures that were occurring generally across the railway industry at the time. With the growth in the size of railway companies, company directors’ control on operations lessened as they didn’t have the capacity to monitor everything that went on within them. The result was that more authority was delegated to the heads of department and increasingly formalised procedures were introduced as the industry matured.