An Important Piece of Railway Stationary - The Guard's Journal

The stationary of Britain’s railways is not the most fascinating subject in isolation. Yet, every piece of paper that the Victorian railway companies did have a purpose and relating stationary to its purpose is, therefore, more interesting. The guards journal was probably one of the most unchanging pieces of stationary in British Railway history, being developed in the industry’s formative years and surviving right through until (at least) the 1960. By virtue of its long life it suggests that they were crucial to the efficient management and operation of Britain’s railways.


The journals were simply pre-printed notebooks in which the guard of a train recorded the details of the journey. The 1853 London and South Western Railway (L&SWR) rule book specified that goods guards were required to note the following details:-

1.The number of Waggons in a Train (loaded and empty) at the beginning of the journey.
2.The number picked up and left at intermediary stations
3.The supposed and actual times of arrival and departure from stations
4.Any remarks relating to the journey.
The only variation on this in the Passenger Guards journal was that there was no requirement to record the number of carriages a train.[1]


There is no indication that the basic information recorded in the journals changed up to the 1910s on the L&SWR. A blank version of a Passenger Guard’s Journal from the period (it having inside 191_) required the same information to be recorded as in previous years, but with many additional pieces of evidence. The full list of what had to be entered by gaurds can be found below.

1.Day, Date and Time of Journey
2.Time at which train arrived and departed ‘stations, junctions or signal boxes.’
3.The lateness of the train at each scheduled place.
4.Formation of the train
a.Description of the Vehicle
b.Painted Number
c.Number of Wheels
d.Block or Set Train Number
5.Vehicles taken on or off the train
6.Engine Number
7.Weather Conditions
8.Driver Name
9.Number of Inches of Vacuum Maintained
10.Name of the Assistant Guard.
11.Service Book Number
12.Special Notice Number
13.Service Number
14.Explanation of Delays, remarks &c[2]

Once again, the only difference with the goods guards’ journals was that the guards still had to record the number of wagons in a train and where wagons were picked up and dropped off.

The importance of the journals came after the journey had been finished. On arrival at the trains destination, the guard would deposit the journal in the office of a senior Traffic Department manager (either the Superintendent of the Line[3], or District Superintendent[4]). The clerks of the office would set to work on them, extrapolating the data contained within.

Senior managers would subsequently receive reports on how efficiently the trains were running, how overloaded with wagons they trains were, how to time the trains were operating, where wagons were dropped and taken on the train, and any occurrences of note that was occurring on particular parts of the network. Subsequently, decisions could be made by them, for example to increase the number of goods trains on a certain line to reduce train loading, build new types of locomotive to increase pulling power, schedule more trains on a particular line, increase or decrease the number staff at stations or yards dependent on the level of traffic coming from them, or notify other departments that repairs to the trains, rolling stock or the line were required. 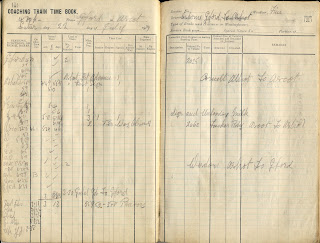 But the value of the guards’ journals went beyond just aiding the efficiency of the Traffic Department. In 1857 the Locomotive Committee of the L&SWR asked the Traffic Committee (that had charge of the running of the trains through the Traffic Department) if the Locomotive Department could have access to them. They required use of them to ascertain the mileage of all the company’s rolling stock, and subsequently monitor how much it cost the department to maintain carriages and wagons for each mile that they travelled.[5] This was allowed, and the journals were subsequently viewed by Locomotive Department clerks in the Superintendent of the Line’s Office.[6] From the returns that have been seen within other companies, it is suspected that this was a universal industry practice. This enabled senior Locomotive Department managers to see whether it was prudent to replace, rather than renovate, rolling stock, whether to increase the repairs schedule, or attempt to make cost savings in the repairs procedure.


It is, therefore, understandable that the guards’ journal remained central to railway operations for well over 100 years, as they was central to shaping decision makers policies on how the line was operated and its efficiency.

[1] London School of Economics Library [LSE], HE 3020.L L84, Rules and Regulations for the Guidance of Officers and Servants of the London and South Western Railway Company, 28th April 1853, Rule 24, p.77