A Little Book of Treasures - A Discovery at the National Archives

It is strange that I have been all over the minute books and files of the London and South Western Railway (L&SWR) at the National Archives, yet had never looked at one record that I found on the catalogue. Once I had ordered the record, which was listed as a ‘Personal collection of details of a varying nature covering costs, and information of a general character,’ (RAIL 411/415) I was unsure what to expect. The nature of the surviving documents from Britain’s railways falls into three categories, the official documents (committee minute books, shareholder registers), operational documents (timetables, locomotive registers) and oddities.

On it arriving in my locker, I quickly realised this document fell into the latter category. At about 3 inches across, and 6 inches high, this unassuming book contains the weirdest and wonderful collection of information on the L&SWR that I have ever found. The content is all handwritten and there is no overriding theme. I am pretty certain that it comes from a member of the L&SWR’s Locomotive Department, as most of the information is of a ‘Locomotive Department’ nature, and the details cover the period 1903 to 1918. Because of this item’s odd nature, I thought I’d share some interesting snippets.

I thought I’d start on the first page which lists the ‘rates of pay of mechanics’ at the Eastleigh Locomotive Works in March 1918. Firstly, it is noted that mechanics on average worked for 50 hours a week. This wasn’t an unusual length of time to be working in 1918, but it would have been less than their predecessors who may have worked up to 70 hours a week. Of the 41 positions within the works listed the highest paid were the Foregemen, who earned 46 shillings and 6 pence per week or £120 18 shillings year. Lowest paid were the Hammer drivers, who earned 18 shillings a week or £46 16 shillings a year. At the bottom of the page is also found information on apprentices, who were supposed to receive ‘full journeyman’s rate’ (whatever that was) and were to receive half yearly increases until they had completed their apprenticeships. 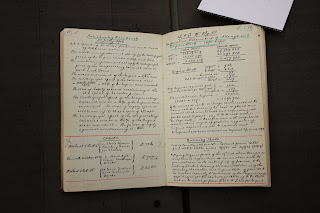 Like all railway companies, the L&SWR had a considerable increase in traffic in the 1890s. On page 16, from around 1905, an effect of this traffic growth is shown, as the author noted the increase in the engine and train miles that the company ran between 1895 and 1905. In 1895 L&SWR trains ran 15,315,290 miles, whereas in 1905 they ran 18,549,609 miles. Yet, these figures did not include the distance that the locomotives individually travelled, as this was longer and included trips to engine sheds, running around trains and any maintenance work. Thus, in 1895 L&SWR locomotives moved 21,291,938 miles, but by 1905 this distance had increased to 27,769,668 miles. But, the increase pressure on the company’s services could only accommodated by expanding the locomotive stock, and between 1895 and 1905 the locomotive stock jumped from 664 to 736 locomotives. Further to this, the author made a note on the L&SWR’s future locomotive requirements, saying that the locomotives already built would be sufficient for, at most, 8 years. This shows that by this time forward planning was a part of railways’ decision making process. Yet, like all businesses, this was a guess. As such, the author stated that a worst case scenario, new locomotives may be needed after only 5 years.

From around 1908 or 1909, on page 24 is the quite odd note titled ‘the life of a tree.’ This indicates that it wasn’t just the type of wood that was interesting this individual or the locomotive department. Rather, woods' lifespan was also of interest. The author received this information from the Washington Forestry service, showing that Anglo-American communication was active. Therefore, Pines lived a maximum of 700 years, Silver Firs 425 years, Red Beaches 245 years, Aspens 210 years, Birches 200 years, Ashes 170 years, Elders 145 years and Elms 130 years. The reason for the author to collect this information is unknown, but I guess that it may be associated with what wood the Locomotive Department chose when undertaking different woodworking activities.

On page 87 there is a list of the different prices that the L&SWR paid for water at different locations in January 1912. Interestingly, it shows that local economic structures may have played an important, and probably unpredictable role in a company’s costs, as water was provided by local water companies whose prices varied hugely. So, for example, at Waterloo, the company paid 6 1/8 pence per 1000 gallons, while at Wadebridge in Cornwall they paid 4 ½ pence per 1000 gallons, and at Bishops Waltham, in Hampshire, their bill was a massive 1 shilling per 1000 gallons. In this period, there were no large water companies that could set national prices which would have enabled the L&SWR to predict each year what the cost of water would have been better.

On page 102 is probably my favourite entry in the book. It details at an unknown date terms of employment for engine cleaners. I think, instead of paraphrasing the text, I will just replicate it here. Boys ‘Must be between 16 + 18 years of age, of good physique + have been vaccinated. Must not be less than 5’ 4” at 16 years of age + 5’ 5” @ 18 years of age. Must pass eye exam + exams in arithmetic up to and including the rate of three. Must live within easy walking distance of their work, but engine cleaners appointed at Nine Elms are eligible for free residential tickets and must live within a radius of 12 miles.’

The joy of this book is that it does have little snippets on many forms of railway history, whether they be technological, scientific, social or managerial. It could, therefore, add much to the PhD and I look forward to getting stuck into it. However, the downside is that the document will take a lot of time to truly get through and understand. Whoever the author was, I accept his challenge.