Safety for Britain’s railway employees before 1913 was governed by the rule books that each was obliged to carry. This had been the case since the railway’s beginnings. However, the rule book did not prevent accidents occurring, and between 1900 and 1913 the average number of railway employees killed per year was 485, with the number of injuries being 20,737. Thus, while the rule book was an established part of railway life, its instructions were failing to prevent accidents. Mike Esbester argued that this could be attributed to the formality and compulsory nature of such documents. ‘The reader was unlikely to read the solid mass of text except when compelled to do so.’[1] It wasn’t until the Great Western Railway (GWR) introduced the “Safety Campaign” in 1913, that things began to change.

The origins of the ‘Safety First’ campaign can be found in the United States. In the early 1900s, Ralph Richards, the Chicago and North Western Railroad’s (C&NWR) general claim agent, became concerned by the number of accidents within the company. As late as 1910 107 men were killed and another 9,000 were injured while at work for the company. Thus, in 1905 he published a number of articles on safety issues and in 1906 these were reproduced as a book. At the same time he attempted to get the C&NWR’s management interested a campaign, something that would become a fruitless endeavour until 1910.[2] By 1912, the ‘safety first’ campaign had become accepted amongst the management of many American railroad companies.

The GWR’s management first came interested in the ‘Safety First’ campaign in 1913 through articles in the Illinois Central Railroad Magazine, George Bradshaw’s book the Prevention of Railroad Accident and through other publications. However, the ‘safety first’ mantra was spreading within Britain’s railway administrators and commentators at the time, and the GWR’s management were simply the first to act on this interest. Thus, the GWR contacted some American railroads about their campaigns with a view to introducing something similar amongst its own employees in early 1913.

Esbester argued that the ‘Safety First’ campaign ‘reinvented safety education in Britain,’ using journalistic techniques to convey its messages. While the contents of the rule book were stuffy and unappealing, the messages provided by the campaign were attractive. Indeed, the GWR used its staff magazine, the Great Western Railway Magazine, to convey its messages as well as publications, competitions and posters. The contents focussed on such areas as safety in coupling together trains, crossing the line, dealing with electric lines (in later years), loading carts, riding on the top of carriages and not standing too close to a steam train’s exhaust pipe. 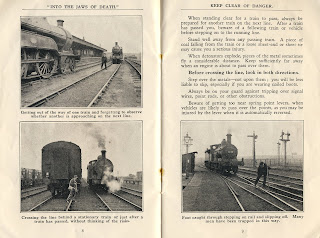 Articles were written with the employee in mind. They were straightforward for the individual to understand and used informal language that was very different from that found in the rule books. Furthermore, photography was utilised in all the material that was produced, usually showing ‘correct’ and ‘incorrect’ working behaviour (shown – an example from the 1920s). Additionally, capitalisation and bold text were used to highlight important points. Lastly, in 1916 the GWR introduced a pocket token about the size of a penny to be kept with loose change. This had the ‘Safety First’ motto, ‘IS IT SAFE?’ emblazoned all over it and every time an individual brought out their change it would be there to remind them of the value of safety.

Quickly after the GWR started to work on the campaign it was taken up by other British Railway companies. Indeed, the GWR shared its materials. The companies that introduced campaigns were the London and South Western, Great North of Scotland, Midland and Great North Joint, Wirral, Rhymney, Cambrian, Cardiff, and Isle of Wight Central, North Eastern and Hull and Barnsley Railways. Indeed, it is interesting to note that the diffusion of the campaign happened just as quickly in Britain as it did in America, with many of these companies adopting the campaign by 1915.

So why was the campaign introduced in 1913? Esbester concludes that a combination of two factors that precipitated its adoption. Firstly, this was a period in which the profitability of Britain’s railways was at an all-time low. Secondly, the railway companies were under intense pressure to improve the working conditions of their employees, both from government and the unions. Indeed, in 1911 there had been a national railway strike (which I wrote about here). Thus, the campaign was an attempt by the railway companies to prevent interference from the government in labour relations, placate the unions, while at the same time trying to avoid spending money on costly new safety devices.[3]

If you would like to read Mike Esbester’s article in full, it can be found HERE.