While I talk a lot on this blog about the broad issues of railway operations, I rarely discuss the day to day running of Britain’s railways. In July 1912 the Railway & Travel Monthly printed an article entitled ‘The man with the gold cap.’ The article discussed the nature of the daily work of the stationmaster. Written by J. Thornton Burge, a stationmaster on the London and South Western Railway, he stated that he had ‘often been struck by the apparent ignorance of the general public as to the duties and responsibilities of a stationmaster.’ Burge worked at Templecombe Station, a station of considerable size where there was a ‘very large transfer of traffic’ and ‘marshalling of trains.’ Burge, while working for one company, clearly felt that the experiences he was describing applied to most station masters throughout Britain. 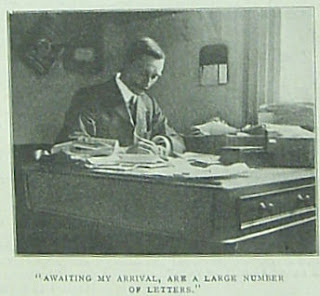 Burge’s day started at 7.45am, where on arrival he would find between 50 and 100 letters. Some were from Head Offices which had ‘arrived by trains during the night,’ some were from his own staff, and others came from other station masters. The details of the letters were very varied, including requests for ‘special attention to be given to some old person or child changing trains,’ the quick transit of goods and complaints from traders. There were also enquiries from headquarters as to suggested timetable changes, derailments, operating irregularities, staff changes or pay rises. All of these had to be read, and responded to.

After dealing with the correspondence he next received the night inspector’s report that detailed any irregularities as to the running of the trains, followed by the yard foreman’s report that showed how many wagons were in the yard. From this, he would be able to determine whether there were more wagons waiting to be sent from the station, than the goods trains that were due to arrive were able to convey. Thus, he would have to arrange special trains. Lastly he read the signalmen’s report which explained any delays, most of which he could account for to head office without the further need for investigation.

Stationmasters in the period were also responsible for the station’s accounts and returns. Therefore, he had to check and sign many returns, accounts had to be settled and claims by traders investigated. He also had to make sure all trains were ‘cleaned and birthed’ for the morning services and every delay in the train service had to be reported to headquarters.

By now many trains were passing through the station, it being the busiest part of the day. Being the man in charge he had to make sure that their movements were completed efficiently. On the one hand, he was not to delay the fast trains considerably, lest he ‘incur the censure of his chiefs.’ Yet because his station was a junction, if he let trains go that were due to connect with others that were late, meaning passengers missed their connections, he may also ‘upset plans’ and ‘greatly annoy passengers.’ However, the telegraph and telephone was utilised to regulate the service and plan for irregularities.

After all the correspondence had been completed and the rush in traffic was over, the stationmaster had to do his early morning inspection of the station to check that all was in order. This encompassed every part of the station from the waiting rooms to the lavatories, to the goods shed and yard. Additionally, once or twice a month he made surprise visits to the outlying signal boxes to make sure that nothing was out of order.

The rest of the day seemed to be filled up in attending to the range of other issues that arose at the station. Burge laid stress on frequency with which ‘blockages’ occurred on the main lines to which he had to attend. They occurred for multiple reasons, for example flooding on the line, the slippage of an embankment, a derailment, or an accident. It was the stationmaster’s duty to make sure that safety was ensured, but that, if possible, trains could continue to run. With a group of gangers and platelayers he would proceed to the blockage and put signalmen on either side of it to warn oncoming trains. He would then marshal the employee’s efforts to restore the free movement of trains. Interestingly, he commented that on such occasions it would be useful to not wear a uniform, as when hurrying around the station in times of urgency, he would be continually accosted by passengers or traders wanting information or trying to make a complaint. 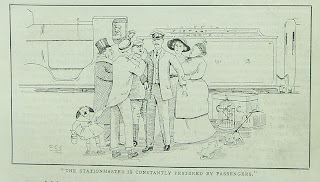 Burge made the point that unlike other grades of employees, his responsibilities for looking after the station meant that he was never off duty and was ‘supposed to be always within reasonable call for cases of urgency day and night, Sunday and weekday, and from the time he becomes stationmaster he practically gives himself wholly to the company’s business.’ Thus, on many occasions, after he had left his post, he was called back to the station to attend to some matter. This was particularly the case for Burge as trains ran all through the night. He remembered a number of cases when he was called on at such times to attend to a disabled man, to make a decision about some injured cattle and when fog and snow storms slowed operations on the line.

While this was only a cursory view of stationmaster’s activities, and I could not do the entire article justice here (peppered as it is with very detailed, quite boring, information), what has been shown is that the stationmasters before the First World War were a dedicated group of individuals who were under consistent pressure to keep the railways of Britain moving. Their jobs while relatively clean and free from risk of physical harm, were far from easy and on occasions were very arduous.