Improving the Management Class? LSE Training and the London and South Western Railway.

I have written before about the training of London-based railway clerks at the London School of Economics (LSE) in the very early twentieth century ( here). Realistically, clerks were the only individuals in the pre-1914 railway industry that had a chance of moving into management. Thus, the training, which took place from 1903 onwards and which was up to the clerks themselves to attend (although the railway companies made a donation to the LSE), were designed to give them a good grounding in what was considered good management technique. What is of interest in this post is not the courses themselves, they have been covered before. Rather, I am interested on the effect that the courses had on the quality of railway managers. Did the courses have the potential to improve the quality of railway companies’ management class? The company of choice is the London and South Western Railway (L&SWR).

The LSE contacted the L&SWR about their clerks attending its courses in October 1903, and by May 1904 183 were attending.[1] Some of the earliest courses L&SWR Clerks attended were as follows:-

1- The Economics of Rapid Transit

12 - The Law relating to railway companies

After 1903 number of L&SWR employees attending fell consistently up until 1913 when only 43 took the courses. Understandably, during World War One the number of attendees dropped off further. However, after 1918 there was a slight recovery in numbers. This is shown in the graph below. It is suspected that this drop, apart from during the war, can be attributed to the fact that in 1903 most of the clerks who were willing to attend the LSE did so at that point. Subsequently, those who went later on were either new employees or they had moved to places where the LSE was geographically accessible. However, their numbers were not as great. 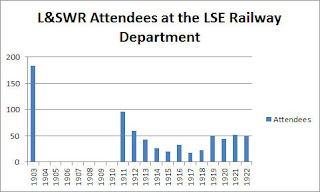 Yet, despite high overall attendance, the effect the courses had on the calibre of the L&SWR’s management class seems marginal. I have found that 156 L&SWR employees attended courses at the LSE which were assessed by examination, their results being recorded on their staff records. Of these individuals only 3 (1.92%) actually went on to become senior managers within the company. Furthermore, in 1921 the company did a detailed survey of its entire staff. This census showed that across all departments that it had 162 individuals in senior management positions. Thus, the three individuals constituted only 1.85% of the L&SWR’s management in this year.

The three men were John Percival Milton, William Tucket Venton and Herbert Ivor Bond. Milton was a clerk in the Goods Manager’s Office when he took his first course in 1903 (Law of Carriage by Railway). He later became District Goods Superintendent at Salisbury in 1918.[4] Venton was also a clerk in the same office and also began in 1903 (‘Law of Carriage by Railway’). He later became a District Goods Superintendent in 1912 at London, later moving to Southampton.[5] The last was Bond, and Draughtsman in the Engineering Department. It is unknown what courses he took, but in 1919 he became London District Engineer. Of the three only Milton excelled, and in 1912 he won the 'Brunel' Medal for three first class certificates in three subjects in not more than four years.

Therefore, attendance by L&SWR employees at the LSE courses had minimal effect on the quality of its senior management between 1903 and 1922. Nevertheless, it is possible that it did improve the day to day performance of the other 153 attendees from the company. Indeed, the LSE training may have had far had more benefits for the quality of its junior management. Presumably, many of those who attended the courses later on in their history (after 1910, for example) would not have had time to rise up into senior management positions by the time the L&SWR was dissolved in 1922. Yet, by then they may have become stationmasters or chief clerks. Furthermore, their career advancement may also have quickened because senior managers advanced them based on their LSE attendance.

Lastly, it is highly plausible that the training courses had an effect on the senior management of the Southern Railway (formed in 1923 from the L&SWR, London, Brighton & South Coast and South Eastern & Chatham Railway), as after its formation the majority of the LSE attendees would have had long enough careers to be senior managers. This will, however, require further research.