I recently wrote about the first fifteen female clerks appointed by the London and North Western Railway’s (L&NWR) at its Curzon Street Goods Offices in Birmingham in the mid-1870s (Here). Dubbed an 'experiment' on the press, their employment was the initiative of the District Goods Superintendent, Mr W.J. Nichols, and was the first time on Britain's railways that women had been employedto perform functions that were at the time ordinarily undertaken by male employees.[1] However, having limited resources my post was informed by newspapers from the period. I knew nothing of the women’s names, ages or careers. I just dubbed them the ‘Birmingham Fifteen.’


But then I was pleasantly surprised. As I related in my last post (Here), The National Archives (via Ancestry.co.uk) has in the last fortnight made available on-line the staff records from some of Britain’s major railway companies from the 19th and 20th century. Therefore, after purchasing a subscription the first thing I did was to look for the ‘Birmingham Fifteen.’ Firstly, I found one clerks' name on the 1881 census, the only census which has been transcribed with individuals’ occupations, and then searched the staff records. The result was that I found more information than I could handle and I have, therefore, decided to dedicate two posts to my findings. The first post will look at when the women were appointed, their ages on appointment, the management structure of the office and their starting wages. The second will look at their careers, their wages after appointment, how they left the service and the effects of Mr Nichols’ initiative on clerical employment for women in the L&NWR generally.

I’ll start this post logically, at the beginning. The first women appointed as clerks at the Curzon Street offices were J.M.A. Heywood, J.M. Matthews and Emma Eliza Beard on the 1st June 1874. These were soon followed by others. However, there is a bit of confusion as to how many women were actually appointed. Indeed, it shows that 19th century newspapers were not always reliable. The Englishwoman’s Review of February 1878 stated that at that point there were 15 women working in the office.[2] Up to June 1876 it seems that only fourteen women had been appointed. Yet, the appointment of Martha E. Hughes and Louisa J. Hands in early 1877 made the total number up to sixteen.[3] The answer to this conundrum, I think, is that Beard, was significantly older and paid more than the others, suggesting that she was the ‘matron.’ Thus, it can be surmised that the Review did not count her in the fifteen as she was their line manager. The number of women in the office only remained at sixteen until the 1st May 1878, when A.J. Stoker transferred to the company’s Wolverhampton offices.[4]

The ages of the women varied, however, all would have been unmarried and possibly the daughters of railway workers. The Englishwoman’s Review of 1878 stated that the majority of the women were ‘young persons,’ [6] and this is confirmed by the evidence. The youngest clerk appointed was L.M. Matthews who was only fifteen years and six months old. It is presumably for this reason that she was listed as a ‘female apprentice.’ [5] As shown below, of the thirteen women employed under the age of twenty, five of the clerks (31.25%) were employed at the age of 15, with the rest being engaged between the ages of 16 and 19. 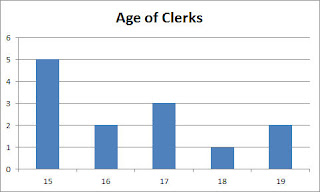