In the last post (here) I looked at the first sixteen women to be employed in clerical positions on Britain’s railways between 1874 and 1876 at the London and North Western Railway’s (L&NWR) Curzon Street goods offices in Birmingham. I looked at their ages on appointment, the management structure of the office and their starting wages. In this post I will look at their careers, wages after appointment, how they left the service and the effect that this ‘experiment,’ as it was called by the press, had on women’s clerical employment on the L&NWR.

It was discussed in the last post how many of the women started on wages that were slightly better than those of similarly aged male apprentices. An investigation of their wages after they started their jobs again shows that while the press was adamant that their employment would immediately reduce company costs, male clerks only began to earn significantly more later in their careers. J.M.A. Heywood and Martha Hughes had increases in their wages typical of the other women in the office. The graph below shows the progression of their wages compared with those of four male clerks appointed in the same period. While the full wage details of only one male clerk has been found and only a small sample is involved, the graph shows that for the first 8 years of their employment the women’s wages kept pace with those of their male colleagues. However, once they reached this point in their increases became much more infrequent. Indeed, the evidence suggests that the wages for female clerks were always capped at £65.00 per annum. 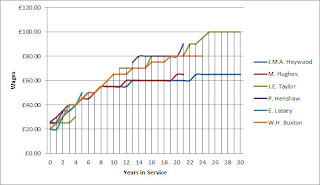 Only in cases where they were promoted to Matron or Assistant Matron did the women earn more. A good proportion of sixteen women eventually took up these posts. Emma Eliza Beard was office Matron until 21st October 1894, at which point she was earning £100.00. Into her shoes stepped E.A. Besley, who at that point had been earning the maximum for clerks of £65.00 per annum. She was thereafter paid £80.00 and by 1903 she was earning £100. However, in December 1907 she became sick and left the company’s employ. She died on the 30th January 1908.[8] Her successor was another of the fifteen, Maria Newman. When the first Assistant Matron, Butler, had resigned in March 1899, and she had taken up that post, and it was only natural that she would become Chief Matron when the position became vacant. It is unknown when she left the position, however, her last known wage rise to £160 came on the 1st January 1917.[9] This suggests that until the early 20th century, the matrons’ wages were also capped at £100 per annum, but thereafter the cap was raised, possibly due to the inflation of the First World War.

The details of how and when eleven of the women left the company have been found and a breakdown of how long each was employed is shown below. The first to leave after four years seven months service (aged 20) was Mary M. Hill and the longest service was given by Maria Newman who, as stated, was still serving in 1917. Seven of the twelve resigned at a young age, possibly to get married. Three individuals left because of sickness. One case, that of E.A. Besley, has been cited. E.E. Beard left the service in November 1894, finally being ‘struck off’ in July 1897. Lastly, Emily J. Mitchell fell sick in February 1883 and was paid until the 12th May when she was struck off.[10] She died shortly after on the 15th May.[11] Only A.J. Stoker eventually received a pension, and on the 1st November 1908 she was superannuated after 43 years service.[12] 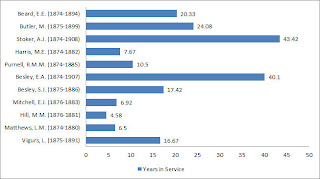 Not all the women stayed in the Birmingham office during their careers, and two transferred elsewhere. A.J. Stoker was the first to move, transferring in May 1878 to the company’s Mill Street offices in Wolverhampton. [13] She remained here for the rest of her career. The most eventful career was Sarah Jane Besley’s. Having joined the company in January 1875, she moved on the 1st July 1886 to the company’s goods offices in Leeds.[14] Yet, in June 1890 she again transferred to the Huddersfield Goods Department where she stayed until her resignation in 1892.[15] Why they moved is unknown. However, it is possible that like with the male clerks they were offered the chance to transfer and took it.

As was detailed in the last blog, the ‘experiment’ was deemed a success and expanded. The Cheshire Observer of Saturday July 16th 1876 reported that female clerks were employed at Chester.[16] While the female clerks at Chester have not been found (as yet), I began cataloguing any others that I could. The L&NWR’s Goods offices at Manchester London Road and Mosley Street hired ten female clerks between 9th July 1876 and the end of 1878.[17] Furthermore, between 17th July and 1st December 1876 eight women were recruited at Camden.[18] Three women were hired at Shrewsbury Station on the 1st December 1876[19] and one is known to have been appointed to Bolton Station on the 9th October 1876.[20] I am sure there were more and more research will hopefully be conducted in the future.

These two posts have highlighted interesting features of the employment of Britain’s first female clerks. Firstly, the women were generally unmarried and under the age of 25, with a few notable exceptions. However, unsurprisingly they had to leave employment on marriage. Yet, a few gave considerable service to the company, some upwards of 40 years. Furthermore, the wages they received were comparable with those of their male colleagues for the first eight years of employment. However, thereafter they stagnated with the maximum they could earn being £65.00. The only way they could receive more was through promotion. However, opportunities were limited to moving into the posts of Matron or Assistant Matron, and there was clearly no chance of promotion into middle or senior managerial positions.

Most importantly, the sixteen women of the Birmingham Goods Department showed their managers that gender was not an issue when it came to ability or quality of work. Thus, what happened in Birmingham between June 1874 and June 1876 changed employment practices on Britain’s railways, as women’s clerical employment was considered by other railway companies and expanded within the L&NWR.