Fare Rises and the Abandonment of the British Railway Passenger

On Tuesday I spent 45 minutes of my morning standing at Waterloo Station handing out cards and supporting the Campaign for Better Transport’s ‘Fair Fares’ campaign. Now, as some of my long-time readers are aware I did raise some concerns about this campaign in a previous post (here). However, those concerns, some of which have diminished, are secondary to the fact that I wholeheartedly support it. I don’t just believe the campaign is important because everyone likes to keep more of their money. I believe it is important because economically it is beneficial that fares are kept within the financial reach of everyone.

This fact was demonstrated to me later on Tuesday when one of my customers at the library, who works with unemployed individuals, stated that for some the fare price was a crucial factor in whether they attended a job interview. Indeed, as the cuts hit, unemployment rises, and inflation goes up, the expected 30% increase in rail fares over the next three years will see increasing numbers of people priced off the railways, with those at the bottom of the income scale being affected the greatest. Consequently this will limit people’s job opportunities, businesses’ access to labour and it may ultimately stunt economic growth. 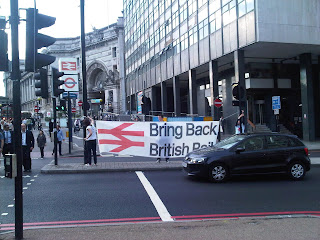 Most of the politicians will argue that the fares need to go up to pay for necessary improvements to the network. In their minds the increases are especially needed because the government is cutting its subsidy to the railway companies. While there is some truth in these claims, it doesn’t address the fundamental issue that has allowed this situation to occur: that over the last 20 years successive governments progressively abandoned the needs of the travelling public in favour of maintaining a privatised system that simply doesn’t work.

Let us be honest for a moment, railways in this country do not make profit any more. However, their social, environmental and economic benefits are so significant that ultimately it is highly beneficial to the nation to have a railway system that touches so much of the country and for the government to maintain it (directly or indirectly). By the early 1990s the nationalised British Rail was working for nation. While always receiving a subsidy, between 1982 and 1993/4 it made impressive efficiency savings to become one of the most efficient railways in the world (as I have pointed out here). All the while, it continued to provide reasonable fares for passengers and boost the economy. However, since privatisation the government has had to subsidise the train operating companies to keep them in profit. Consequently, the cost of the railways to the taxpayer now is far in excess of what it would have been had the industry not been privatised.

Thus, the predicted 30% increase in fares indicate the thinking of the current government. Because of the persistence of free-market ideologies they believe that keeping private enterprise involved in the railways, when it clearly hasn't worked, is more important than the industry's purpose of serving the country's economy and inhabitants. Furthermore, the recent McNulty report on railway efficiency did not talk about significant alternatives to the the private system. Indeed, no one in government seems willing to shout the truth: "this isn't working any more."

Of course the government did not always have the same attitude. The last time the railways were run by private multi-coloured railway companies was in the 19th century. The 100+ companies mostly made a profit. Yet, as the industry matured the government still stepped in to protect the country's poorest individuals. Before the 1870s most railways acted in ways that were simply in their shareholder’s interests. For most citizens the cost of travel was high and although the railways’ operated a first, second and third class system, third class accommodation was only really within the price range of lower-middle and upper working-class individuals. Those at the very bottom of the social spectrum were priced off the railway. That is until 1844.

After eight people died in the Sonning Cutting accident of Christmas Eve 1841, the Board of Trade began an enquiry into third class train accommodation. The culmination was the 1844 Regulation of Railways Act. This compelled railway companies that derived a third of their revenue from passengers to provide one train daily which called at all stations, had a minimum speed of 12 miles per hour, used enclosed carriages with seats and, most importantly, cost the traveller not more than 1d per mile. These were nicknamed ‘Parliamentary Trains’ (or ‘Parlys). Reflecting the financial burden of these services for the railway companies, any company meeting the requirements did not pay taxes on the fares.[1] While not ideal, this was the first intervention by government that forced the railway companies to put on accommodation for those who were not financial able to use it prior to that point. Fundamentally, it was an act by law-makers of economic stimulation. But things didn’t stop there.

The building of the railways caused many residential areas of cities demolished. This meant that many factory and industry workers were forced to move further away from the metropolis. To protect these individuals’ incomes and the labour supply of the businesses they worked for, the railway companies were compelled by the acts of parliament authorising their lines to provide cheap trains for the workmen. While some companies had provided ‘workmen’s trains’ in the 1840s, the first compelled to do so by parliament was the Great Eastern Railway in 1864 when it extended to Liverpool Street. The act stated that it was to provide workmen’s trains to London from Edmonton and Walthamstow at a return cost of 2d. Thereafter, and much to the chagrin of railway directors, by 1899 there were 104 workmen’s trains run daily. The only negative point was that the trains were run very early in the morning, returning late at night.[2]

While these two developments are important individually, they show that all governments recognised the economic and social value of the railways to the nation soon after their establishment. Indeed, political affiliation did not seem to be an issue, and the 1844 act was passed by a Tory government, while the 1864 one was passed by a Liberal administration. Furthermore, these laws were followed after 1870 by others that fixed the rates the railways charged traders and improved the railways’ safety. Ultimately, by the First World War governments had realised that the profit motive of the railway companies was a secondary concern to structural integrity of economy they served.

Nevertheless, we live in an age where there has been a reverse of this attitude by successive governments. Despite the extremely high cost of the railways for the taxpayer, the potential for high train fares to damage economic recovery, the national discontent with the privatised system and the fact that privatisation wrecked the world’s most efficient railway, governments since the early 90s have continued to prioritise the ideology that private enterprise is good for the railways over the benefits that the industry provides to the nation. Thus, the predicted 30% fare increases over the next three years are the starkest evidence of this. It is the wrong attitude for a loss-making, but nationally beneficial industry.

So I say this: Fare Fares Now…Bring Back British Rail ASAP