Given that in the nineteenth century the railways were the main way of transporting anything long distances, it is unsurprising that the festive season was their busiest period of the year. Indeed, the railways carried everything the people of Britain needed for their Christmas festivities, not to mention the people themselves. For this reason some newspapers seemed obsessed with what traffic was carried, how it was carried and its volume, and their reports provide an insight into the level of activity occurring on Britain’s railways in the week before Christmas Day. Receiving particular attention in the late 1840s and early 1850s was the delivery arrangements at the Euston terminus of Britain’s largest railway company, the London and North Western Railway (L&NWR).

The Morning Post of Monday 26 December 1848 reported that ‘yesterday [Christmas Day] and during Sunday, the termini of the various metropolitan termini presented an unusual scene of bustle and activity in consequence of the extraordinary influx of Christmas fare from the provinces.’ The Post stated that the volume of incoming traffic at Euston was so large that on the arrival platform a temporary tarpaulin shed had been constructed in to which goods were unloaded before distribution. It was eighteen feet high and fifty foot long, and at one point before Christmas it had been full. Nevertheless, because the distribution system worked perfectly confusion was avoided.[1] 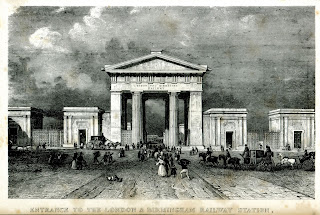 A year later, the Daily News printed a more detailed account of the distribution arrangements at Euston between the 22 December and the morning of the twenty-fifth. The General Manager of the company, Captain Mark Huish, and Mr Brooks, the company’s Traffic Superintendent,[2] had made special arrangements with the company’s delivery agents, Messrs Chaplain and Horne, to expedite the deliveries as quickly as possible. Once again, there was a tent on the arrival platform. However, in 1849 it was larger than a year before, being twenty foot high and sixty foot long. From the Daily News' article we also learn that it was lit by gas lamps to allow unloading operations to continue at night.

Trains arrived day and night alongside the tent and their contents of ‘barrels of oysters, baskets of fish, fruit game and other Christmas presents’  were unloaded into the tent by fifty or sixty porters. The loads were then handed to the Chaplain and Horne's agents who, with the help of ‘sorters’, arranged the parcels into large compartments on the station wall. These compartments were each labelled with the districts of London that the consignments were being sent to. Some of which were as follows: ‘the City, Strand, Squares over the water, Islington, East End, Finsbury, West-end, Kingsland, Clerkenwell.’

At each compartment two and three omnibuses stood being loaded with parcels and packages being checked by the L&NWR’s clerks. They were loaded carefully and securely, and that efficient loading was achieved not just by ‘laying the packages across,’ but also by ‘suspending turkeys and pigs outside.’ Some were estimated to hold 200 packages and were so piled up that they were as the second floors of houses. Thus, the paper commented that on leaving the station they ‘attracted no small attention.’ Overall, there were thirty or forty omnibuses and when all were filled to capacity they departed ‘without delay.’

Of course, with so many goods passing through this may have offered an opportunity to criminals to pilfer, and to prevent such loss the company’s policemen were present the entire time.

The operation was highly efficient. On Sunday 23 December the majority of the trains carrying mail and goods for London began arriving at 4.30am, and by 9am all their contents had been despatched into the city. However, on Christmas Eve and Christmas Day mornings it took until 10am to clear the incoming traffic.[3] Further evidence of efficiency was recorded in 1853 when only two consignments out of 40,000 were found to have lost their labels.[4] But, additionally, the effectiveness of the operation is so impressive when considering the number of parcels and packages entering Euston Station in the three days up to and including the morning of Christmas Day. The estimates reported were as follows:-

Clearly, with just the use of paper and ink, the L&NWR organised the unloading and delivery of consignments with a speed and efficiency that puts some modern delivery services to shame. Ultimately, this enabled London’s residents to have a very, merry Christmas.