Last year around this time, I showed how Christmas was celebrated on the London and South Western Railway before 1900 (HERE). However, one thing stuck in my mind, namely, that the railways still operated on Christmas Day. Therefore, this year I conducted a bit of research to discover more about these services. Unsurprisingly, I found that the increasing importance of Christmas throughout the nineteenth century affected how many trains were run on Christmas Day. 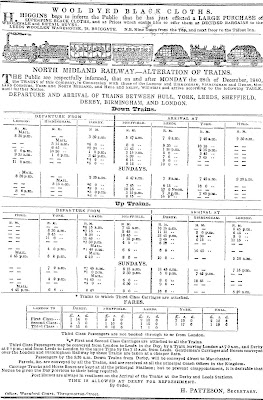 In the 1830s and early 1840s it seems that the railway companies did not make any special arrangements for Christmas Day and ran regular weekday services. An advert printed on 22 December 1837 for the Grand Junction Railway’s forthcoming services between Birmingham and the Liverpool and Manchester Railway contained not one word about the coming festivities.[1] Indeed, adverts printed in the week before Christmas for trains on the London and Greenwich Railway[2] and  the Great Western Railway (GWR) in 1838,[3], as well as on the Birmingham and Derby Railway in 1839[4], also mention no special passenger train arrangements on Christmas Day. Furthermore, an Eastern Counties Railway advert from the 22 December 1843 clearly announced that ‘On Christmas day the trains will run the same as on week days.’[5] Lastly, shown on the left is an example a Great Western Railway advert published on 19 December 1840 which has no mention of Christmas.[6]

The reason that trains continued to run as normal on Christmas Day in this period was, I presume, because it was only significantly observed by the upper and middle classes and for many people it simply a normal day. Nevertheless, 1843 was a year when the increasing popularity of Christmas amongst all the population was becoming evident. In that year the first Christmas card appeared [7] and on the 17 December Dickens’ A Christmas Carol was published, a text which helped to revive interest in forgotten Christmas traditions [8].

Therefore, around this time railway companies began offering special rates to passengers in the festive period. In 1844 the Preston and Wyre Railway offered, in bold capital letters, ‘CHRISTMAS CHEAP TRAINS’. Between Christmas Day and New Year passengers travelling by the 8.30 am train from Preston to any station on the company’s network could return with the same ticket by any train. Furthermore, on Christmas Day and New Year’s Day anyone booking to Preston on either of the two morning trains, could also return the same day on the same ticket.[9] In 1845 the GWR reduced the cost of all return tickets by a third on Christmas Day.[10] Lastly, the Midland Railway allowed passengers who purchased first or second class day tickets between the 24th and 26th December to return on any of those days or on the 27th and 28th.[11] Consequently, throughout the Victorian period offers of this nature were provided by most companies in the festive season.

However, the GWR’s 1845 advert included words which indicated that further changes in Christmas services were afoot. The reduced fares were allowed, ‘reckoning Christmas Day as a Sunday.’ [12] Indeed, while in the GWR’s case they offered the special Sunday fares on Christmas day, seemingly it wasn’t long until many companies began running Sunday timetables on that day also. Evidence has been found of this being advertised by the London and South Western Railway in 1846,[13] the GWR in 1849,[14] the London, Brighton and South Coast Railway in 1854[15] and the Chester and Birkenhead Railway in 1857. Indeed, by the 1860s the running of Sunday services on Christmas Day seemed to be the norm across the railway industry.

However, unlike at present, Sunday timetables were not simply a slightly reduced version of the weekday one and the number of trains running was small compared with the rest of the week. The Chester and Birkenhead’s December 1857 timetable shows ten up and eleven down trains between Liverpool and Chester on a weekday. However, only four up and three down were provided on a Sunday. The GWR’s timetable for services between London and Chester shows five up and six down on a weekday, but only one each way on a Sunday.[16] Furthermore, as Sunday trains were not greatly profitable, railway managers gradually reduced the number of lines that had them as the nineteenth century progressed. Thus, in 1847 only 2.6% of Britain’s railway network had no Sunday services, yet by 1861 the figure was 5.7%, in 1871 it was 18.9% and by 1887 it was 20.1%.[17] Only in Scotland did religious feeling play a role in stopping Sunday services, and by 1914 over 60% of the network had no trains.[18]

Therefore, because the Sunday timetables operating on Christmas Day would have been unable to convey all who wanted to travel in the festive season, especially given its increasing popularity, from the 1850s the railways ran extra services in the three or four days before the 25 December. Indeed, this seems to have become an industry norm. An issue of The Standard from 22 December 1863 shows the following railways were advertising additional services in this period:

Special trains on Christmas Day have been hard to find before the 1860s, and thereafter they were few in number in each year. An Eastern Counties’ Railway advert from 1844 stated that on Christmas day ‘an EXTRA TRAIN will leave Shoreditch Station to Brentwood at a Quarter before Ten o’clock A.M. calling at all the intermediate stations.’[20] However, this seems an anomaly for the period.

After 1860, special Christmas Day services provided were seemingly operating on long-distance routes only. In 1860 the South Eastern Railway put on a special train between London and Canterbury at 8.30am, returning in the evening. The Eastern Counties Railway ran a special train to Norwich leaving at 9.50 am. [21] In 1890 the London and South Western Railway put on a special train at 8.50am for Basingstoke, Salisbury and Exeter, as well as another for Southampton, Portsmouth, Salisbury Bournemouth and Lymington. Both trains called at principal intermediate stations along the way. In the same year the ‘London and North Western Railway’s timetable had ‘several important additions’[22] and in 1895 the company ran a special train from Euston at 6.15 am stopping at all major stations between there and Glasgow.[23] Lastly, In 1899 the South Eastern Railway offered ‘several extra trains.’[24] Ultimately, the total number special Christmas Day trains each year is unknown, however, it is clear they were not numerous.

Overall, during the Victorian period the number of trains railway companies provided on Christmas Day diminished. Immediately after the industry’s birth companies ran full weekday timetables on 25 December. However, in the 1840s sparse Sunday timetables were adopted, which themselves provided a diminishing number of services as the decades passed.  Thus, this adoption of Sunday timetables began the long decline of the Christmas Day passenger train, the last of which was run in 1981.[25]