The York Tap - A peice of railway heritage restored

As some of you may be aware, last week I went on a short holiday to York. I love York so much. It is a place where there is great things to do, plenty of pubs and, of course, the National Railway Museum. However, this visit was enhanced by a recent addition to this wonderful city, namely, the York Tap. For those of you unfamiliar with the Tap, this is a new pub which opened on the 16 November at the station. Situated next to the platform, this establishment boasts 32 taps on the bar and somewhere between 80 and 100 bottled beers. Indeed, possessing such a range of beer puts it solidly in my top three drinking establishments in York (and believe me, this is a constant battle in my head) and it will not surprise anyone that during my three day visit, I popped into the Tap twice. 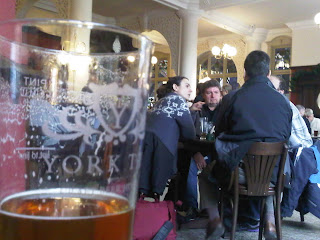 For most of the last quarter of a century the building which houses the Tap was home to the ‘York Model Railway,’ a small, much overlooked, attraction. Yet, in early 2011 it decided to move to a site in Lincolnshire and it was at this point that Pivovar, owner of the Euston and Sheffield Taps, as well as Pivni in York city centre, moved in. The decision by East Coast, the Train Operating Company that manages York Station, to allow Pivovar to inhabit the building was important for railway heritage. The building is Grade II listed and as such special care had to be taken with it. Indeed, the process of renovating and revealing the neglected interior cost £250,000, including a contribution of £75,000 from the Railway Heritage Trust.[1]

This money was clearly worth it, and entering the building is a bit like going back in time. Never, in all my drinking days have I experience a pub which satisfies two of my loves: railway history and good ale. Thus, after my visits I began thinking about the history of the Tap building and was resolved to investigate. Much to my surprise, after only a short period of digging I found an article in The British Architect describing the building’s construction and interior.

The building that the Tap uses was originally opened in February 1907 by the North Eastern Railway (NER) as the station’s tea room. It seems that around the same time the NER may have been in the process of expanding tea rooms facilities at its large stations, as the article on the York establishment was accompanied by another describing a new tea room at Hull (now a Pumpkin Café). Indeed, the Hull and York tea rooms, as well as their interiors and furniture, were both designed in an art-nouveau style by Mr W. Bell F.R.I.B.A., the company’s architect. 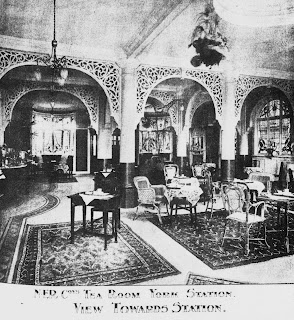 The British Architect indicates that many of the features of the tea room have been restored in the Tap. The floor space was 2,500 square feet and, like at present, there were two doors, one facing the city and another opening onto the station platform. These two entrances were situated so that ‘the ordinary public, as well as passengers, may use the room.’ The only difference was that the room originally possessed ‘draught-proof’ revolving doors, whereas currently the Tap has regular ones.

The building's design was originally governed by the position of the pre-existing roof columns and spandrils. Indeed, these were incorporated into the tea room, with fretwork added to the columns to hide the fact that they were part of the station’s main structure. Furthermore, the joy with the current interior is that the colours are very similar to those adopted in 1907. The walls were ‘finished in crimson,’ the ceiling was cream and the woodwork was white. The furniture and counter were executed in ‘dark mahogany,’ and the floor, which remains to this day, was a mosaic with an ornamental border. The only significant departures in the Tap from the 1907 features is that the counter and furniture are in different positions and are of a different design, and there is an absence of floor rugs (as shown in the pictures). Nevertheless, what has been accomplished when sitting in the Tap today is a wonderful sense of history and nostalgia.
Lastly, a nod should go to those who created the structure in 1907. The contractors for its building were Messrs Blackett and Son of Greencroft East, Darlington, and the instillation of the mosaic's terrazzo paving was entrusted to Messrs Diespeker of 60 Holborn Viaduct, London.[2] 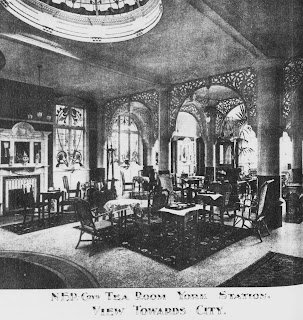 Overall, what has been restored at the York Tap is not just the fact that the building is again quenching the thirsts of passengers. By the early twentieth century, class distinctions in station waiting and refreshment rooms had been mostly abandoned across the railway industry and, thus, the NER created a facility worthy of both first and third class passengers. Therefore, what Pivovar have recreated within the York Tap is an example of the railway refreshment room’s last stage of development before the First World War, a period when passenger travel was at its most comfortable. Indeed, for this act of preserving railway history (combined with providing copious amounts of beer), I cannot heap on them enough praise.