What will happen to the railways of this nation in the next five years? I don't know, who knows? The media certainly didn't talk about it throughout the election campaign. I think this is principally as one of the most expensive additions to the British railway network, the new high speed line to the north of the county, High Speed 2, was debated by the parties before the election date was even announced. Further, because the three major parties broadly agreed on how this line would be built there was no real need to highlight the small differences in each of their approaches. This said at an estimated cost of around 34 billion, 14 billion more than the Trident renewal cost, you'd think it'd at least be mentioned...once. (Ok, it probably was, I just must have missed it) 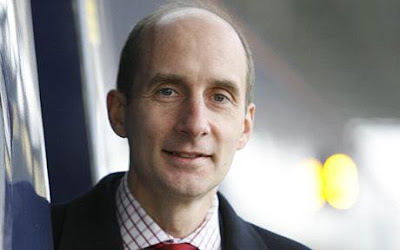 While I am in no way a Labour supporter, one of my main irritations about the fact they are now out of government is that Lord Adonis, probably the man in the country who least lives up to his name, will have left the Department of Transport (DofT). I think that at the moment it is a shame he will not go down in British political history for his work at the DofT. Every time I hear his name mentioned on the news it is to regale us with tales of how he was one of the members of the Labour party negotiating team that tried establish a Liberal Democrat-Labour coalition, against the wishes of many in his party. This is, unfortunately, not what he should really be remembered for. After all, he was only trying to keep his party in power. What's more, it is likley that he will also be remembered as the man who erroneously grounded everyone under an ash-cloud when the Icelandic volcano blew its top. Again this is not really something he should be remembered for.

What Adonis should be remembered for is the many policies that he enacted and drove forward to improve this country's rail network. He took office as Minister for Transport in October 2008 under Geoff Hoon, and succeeded him as Secretary of State in June 2009. Hoon was pro-plane and pro-car in his approach, but largely ineffective. Yet Adonis felt that the 'green' transport policies were the future, and as such railways took centre stage. As such, Christian Wolmar stated in Rail Magazine that 'the new Transport Secretary has effected a complete revolution in the government’s handling of the railways.' (RAIL No. 624, August 11th 2009)

Firstly, and it has already been mentioned, he was the man that got the plans for building a new High Speed Line to the north off the ground. This was after years of political indecision and having the proposal firmly locked away in a filing cabinet. On Adonis' advice, the Government set up the the High Speed Two Ltd company in February in 2009 to look into the viability of the project. Adonis therefore brought the issue to the forefront of politics and this had the effect of forcing the other two major parties into developing their own policies regarding a high speed line. Subsequently, there was universal consensus in the election manifestos that the development of High Speed 2 is now an economic, social and environmental necessity. Therefore there is now a real hope that building work will start in the next parliament (even if the Liberal Democrats and the Conservatives do disagree on the finer details). This said, the sad thing is that if it does succeed Adonis won't be at the helm to take any credit for getting this gargantuan project off the ground.

Further, Adonis set out in July 2009 a Government plan to electrify important lines that still are dependent on diesel traction. These included the Great Western main line to South Wales and the Liverpool to Manchester route. This would electrify 300 miles of railway, would give faster journey times, and provide travellers with a more pleasant journey. This last part is particularly relevant to me. Having recently completed two journeys on the Great Western mainlLine I can say that the juddery, jiggery and jumpy service was more than a little irritating at times, especially when trying to consume hot tea. While the plans were given a very negative reception in the mainstream media, the railway media and franchise holders for once had the same opinion, and applauded the vision that Adonis had shown. However, I think the electrification plans are less likely to be undertaken by the incoming government. It was a proposal that came from Adonis and his team, and not from business or the travellers. Therefore with him gone, electrification probably won't see the light of day for a long time. In addition, while relatively cheap compared to HS2 at 1.1 billion pounds, it was only projected to break even after 40 years. With a massive debt the Government are highly likely to side-line it based on this projection.

The last area where the loss of Adonis will be felt is in his support for the travelling public. He demonstrated frequently that for him the traveller came first. Mainly this ethos was expressed through the DofT's increasing influence over the companies running the franchises. Yes, Adonis was accused of micromanagement, but there are a number of cases where this was of very large benefit to the customers. Additionally, there were none that come to mind where it was not. Firstly, he beat South West Trains up (something that I am never unhappy about) regarding their plans to close ticket offices, reversing the decision. Secondly, as National Express East Coast's own money worries were beginning to hit the quality of the service, he told them that their game was up and stripped them of their franchise. As a result we now have the Government running East Coast as a not-for-profit company. I certainly have no complaints and to my mind the service has improved. Lastly, he conducted a rail tour round the country experiencing the delights of the British rail network. The joy at the end of it was that he complained about the fare prices and gave an ear-full to the Train Operating Companies (TOC). This was a man who frequently supported the rail user over the TOC's lust for profit.

There were of course mistakes, and the Intercity Express Programme (IEP) springs to mind. This was a project to replace all of Britain's ageing high speed trains, some of which are nearly 35 years old, at a cost of 7.5 billion. Yet, the plan was correctly put on hold in February this year after £20 million had been spent. The project's value for money was to be reviewed given the financial crisis. Yet, as I have stated before in my blog, it was better to spend 20 million erroneously, than waste 7.5 billion. I suspect, given the fact that Labour dropped the plan in February, that this project will not be revived. This is one case where I won't complain and for various reasons I am happy to see the back of it.

As I write there is no Secretary of State for Transport, the new government hasn't appointed one. Lord Adonis was a man who could see into the future. He envisioned a Britain where people used trains more than cars, where rail transportation was clean and comfortable, and where the rights of the rail user were above those of those of the TOCs. He saw that long-term rail policy is not something that interests a great many people, that the rail user is essentially concerned with those aspects of travel that confront them from day to day, such as fares, open ticket offices and quality of service. He addressed these things, yet at the same time realised that their were bigger issues that needed attention to make the railway industry a success, such as long term strategy, funding and the environment. He realised that the media and the public would not demand these changes, rather that the big initiatives needed to come from his office, from his mind. Therefore this is why I feel that in the last year and a half Britain probably had its best Secretary of State For Transport in a very long time (well, as far as the railways go). It is just a shame that his tenure is now cut short.

What, therefore, are the priorities for the new Secretary of State for Transport regarding Britain's railways? The important things are having vision and the protection of the interests of the traveller. It is not good enough for the new Secretary of State to simply accept the 'way things are.' He or she needs to push to make Britain's railways the best they can with ideas, confidence and having the railway user always in mind. Adonis' momentum needs to be continued, but I suspect it will not as it will be hard to better this exceptional Secretary of State for Transport. Goodbye Lord Adonis.
Posted by David Turner at 12:51