I start writing this Blog entry on the 16.30 train from Gloucester to London Paddington, two minutes after leaving Gloucester. The train is 21 minutes late, however I do have the joy of being in First Class, something that I was more than looking forward to. It is, in my life, a new travelling experience. I have only travelled First Class once before. Through a fluke of ticketing four years ago I had the joy of going to York via GNER's First Class service. My, what a service that was. While in GNER's First Class carriages I actually felt like I was a special traveller, like I was a cut above those in the standard class carriages.

When booking tickets to see my friends Jack and Katie in Cheltenham another quirk on the National Rail Enquiries ticketing website was that First Class would cost me only £5 extra each way. So, as I was on holiday, I thought I would pay the extra and enjoy those luxuries that my memory reminded me were part of the First Class experience. The only downside was that I would on the way back have to get a rail replacement bus service from Cheltenham to Gloucester because of engineering works. This was thankfully avoided by Jack driving me in a car. So here I sit (currently at Stroud – a beautiful building) in First Class on the return service. I have to be honest that First Great Western's version of First Class is so far below GNER's of four years ago (and which I hope has continued under the current operators of the franchise, East Coast), that I am thinking about writing a letter in aid of the common good. . 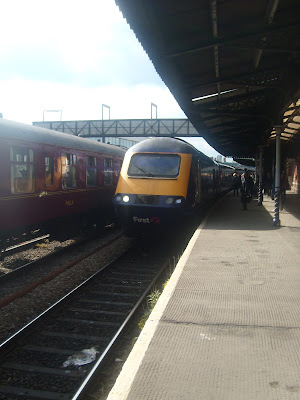 Firstly, and this is just happening as I write, the Buffet car is not open because of staff shortages. So, evidently I won't be getting my complimentary cup of tea and/or coffee. Now I don't know whether I have any rights in this regard, but I was under the impression that if you sell a service at higher cost based on a range of perks and then fail to deliver, then this would constitute a breech of the trade's descriptions act. I mean the complementary drinks are there, plain to see, on FGW's website. They hope (although the member of the train crew who made the announcement seemed unsure) that some staff will join them at Swindon to open the buffet and operate a trolley. In all honestly I doubt this'll happen (it didn't by the way). That's no great loss though, the tea service wasn't up to much on the way in

On the GNER service there were cups and saucers on the table, a staff member with tea and coffee pots to pour on demand, and real milk in a small jug on every table. I think I replenished my tea three or four times...I consumed to the maximum and it was bliss.

This is a lot for FGW to live up to. All I can say is “Oh dear.” In no world, in no parallel universe, in no moment of time, is a card cup, lukewarm water and UHT milk 'first class.' This was bad tea. Now I know I may be being picky as the tea was free, but in a way that is not the point. Running a First Class service isn't just about giving away free items that I'd have to pay for as a standard class traveller. First Class travel is about being provided with a service that is better than that I'd get in standard class. I have paid extra money to avoid those slightly rough-and-ready aspects of standard class. But what about the other services that I have supposed to have paid for? How did they manifest themselves on my journey?

Well, on my inward journey I got the impression that one newspaper was divvied out amongst six people and now, on the way out, where is it? Is this a mythical newspaper? As far as I can see, throughout the carriage, there are no newspapers on tables. In fact come to think of it I haven't seen any staff yet. At least on GNER the newspapers were there waiting for you and there was one per customer. Indeed if, as I witnessed at one point, the paper was missing, you could go to the buffet bar and get one. This strikes me again miss-selling a service. Again it is only a small point in the grand scheme of things, but my complaint is that I have paid extra money for a degree of service that I simply haven't been receiving. Is this because FGW staff simply forgot? Is this because FGW are being cheap? I can't tell you, but I am a disgruntled consumer and at this point I don't care.

I suppose I can't slate every aspect of FGW's First Class service. I have a big, comfortable seat that reclines. However my slight complaint with it is that the arm-rests are a bit tacky, simply being made out of very hard plastic. But let me try and be positive, I have a lovely table. I can't really say much about it, except that, and this won't surprise you at this point, the plug socket doesn't work. I have just mentioned this to the ticket inspector. It seems he can't do anything about it and mumbled something about the fuse coming out. It's lucky on this occasion that I have a long-lasting battery on my computer. However, again this a case having been sold an advertised service (on the website is says there is a plug socket on every table) that I am not receiving.

I am now at Swindon, the home of the Great Western Railway. I have to be honest that if the company's managers of 100 years ago could see how their successors run their First Class service, they would be horrified. My conclusion is this; don't buy First Class tickets from First Great Western. I feel that it is a waste of money. Maybe I am being old-fashioned. Maybe my GNER experience set my expectations abnormally high. Now as I only paid £5 extra for the pleasure of sitting in First Class on each journey I can't really complain. I have received some services, mainly on the way out, that were approximately equatable to that value. Yet if I was someone who hadn't been fortunate in getting a good deal when booking, if I had paid an extra £20 or even £30 pounds as a treat perhaps, I would be very disappointed with a service which in my opinion was simply standard class with a few add-ons. Having a First Class service is not just about hand-outs, better seats and a bit more space, it is about a superior travelling experience. If it isn't, then it should just be named 'Standard Class+.' Sorry First Great Western it's simply not good enough and you will be receiving a letter soon...

NOTE: This was posted when I got home