Early Railway Administrators...The Good, the Bad and the Shiny

Early railways were run by people who nothing about them and were learning the ropes. Railway managers and directors faced a range of challenges that had never been taken on before...by anyone. There was no idea what form of signalling to adopt, who was the best man to promote into a position, or even what the best form of coke to burn was (and no I'm not talking diet or regular). Therefore without established ideas about how to manage large and complex organisations, and with few blueprints showing how to move Ethel the sheep or even Mrs Ethel Flaptyback, from point A to B, the railways employed a motley crew of individuals from many employment backgrounds. It is, therefore, not surprising that the concept of a 'railway-worker' cannot really be considered to have been firmly established until, at least the mid-1850s. In this Blog entry I will look at some of the early administrators of British railway companies and show that there were some interesting individuals that took positions as either 'managers' or 'superintendents.'

So lets start at the bottom. The best place to start if you ask me, just ask any builder. Firstly we have to ask a question, who was the early nineteenth century clerk? Anderson argued in the 1970s that clerks in this period were 'superior to most workers.'1 Attwell agreed, saying that because of their skills in 'literacy, arithmetic up to vulgar and decimal fractions,' they 'stood above the manual worker,'2 even if their skills by modern standards were pretty poor. Railway managers and directors therefore looked to this group to be some of the first railway administrators.

If you had gone to your local station in 1845 it would not be run by a station master. It would be managed by the 'Station Clerk.' London and South Western Railway (L&SWR) rule books throughout the 1840s consistently refer to the administrators of stations by this title. By the early 1850s the company had, however, phased the title out and replaced it with 'station agent.' This said, the move does not seem to have been universal. A search of nineteenth century newspapers shows that it may have still around as late as the 1860s. Generally, clerks were chosen to manage stations simply because there was no one else available in the labour market. However in some sense, while the clerks were of good standing, their clerical status held them back, in that they did not have the social status to be appointed as managers. Overall,what the title represents is the fact that the concept of to directors they were simply clerks, with some responsibilities, sited at stations. They were filling clerical roles akin to those in other industries that weren't unique to the railways.

Next I will look upwards at management. I tend to think that directors split their organisations along a distinct fault line. There were those 'bright sparks' who were engineers, that managed the technical parts of the organisation, such as the building of the lines and the running of trains. On the other hand there were the hotch-potch of individuals that ran companies' traffic departments, that did not have any technical experience or training, but that brought experience from other industries. 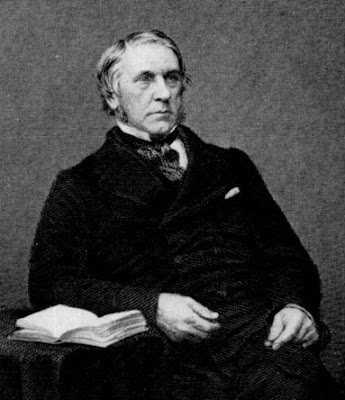 Firstly, I will look at the engineers who were involved in the management of early railways. On the London and South Western Railway (and what a surprise I am focussing on it again) the Way and Works Department was managed by two men between 1836 and 1850. These were Albinus, 'I'm bloody difficult to find information on,' Martin, and Joseph, 'I'm in history I'm like a supernova,' Locke (shown). Both men had their separate remits. Locke managed the line while under construction and Martin managed engineering work after everything was completed. Locke also managed the Locomotive department. He initially, in 1838, devolved control of the department to Joseph Woods, who was one of his employees. Woods was succeeded in 1841 by John Viret Gooch, also an employee of Locke. Gooch's assistant and successor in 1850, was William Beattie, who was, surprisingly, also an employee of Locke (yes, that is sarcasm – can you smell patronage?). What these appointments show is that engineers naturally had charge of engineering functions within railway companies. What, however, is different from the railway industry later on and is important to note, is that engineers were initially the most important managers within a company. This was because the building and operation of a railway line were the first concerns of the directors and this meant engineers had were amongst the company's first employees to be appointed.

Indeed, there is evidence that engineers status' were so high that some were considered better as superintendents of railway companies overall, being given charge of the whole of a company's operations. Indeed in 1845 Martin, who already had the position of Superintendent of the Line on the L&SWR, became General Superintendent taking control of the 'whole concern'. His tenure was short-lived, lasting until 1850 when he left. Further to this, in Bonavia's history of railway organisation from 1971 he states that in G.P. Neele's 1904 book, Railway Reminiscences, listed of the railway industry's top managers in September 1847. Engineers featured in the list were I.K. Brunel (what a surprise) and John Hawkshaw (who?).3 Overall I think that early railway company directors may have perceived that engineers' higher education automatically provided with them with the brain-power to manage a whole railway.

But then again it wasn't engineers who took up most of the high-ranking posts. In the 1830s and 40s, when the majority of businesses were small family firms, directors who had no blueprint of railway organisation would naturally look to employ individuals who had come from the only organisations that routinely administered vast numbers of resources and employees. That said, if you had been press-ganged, can you really be called an employee? Yes, I'm of course talking about the armed forces. Thus, a lot of Traffic and General Managers in the early railway industry had, at some point, worn uniform. Terry Gourvish studied Captain Mark Huish who was general manager of the L&NWR between 1846 and 1858 and who had served in India.4 Bonavia also noted Captain Eborall of the London and Birmingham Railway, Captain Laws and Binstead of Lancashire and Yorkshire Railway and Captian Coddington of the Caledonian Railway.5 Military men were everywhere, filling the administrative ranks of railway companies. This said, there has been no study on how many were actually employed. Their influence is, however, plain to see. Why else would administrators, industry-wide and at all levels of company hierarchies, start to be called 'officers'? Why else would companies adopt draconian, military style rules and regulations? Military men clearly transferred many on the concepts that they learned in the forces to the railways.

Lastly, there were other managers, that Bonavia ignored, that came from 'like' industries such as stagecoaches or canals. I tend to think that they possibly made up a considerable portion of railways' early administrative staff, and they were potentially more numerous than military men. I suppose we know less about them as they were not very glamorous. After all, soldiers have swords, shiny bits and MASSIVE egos (well sometimes). One example of ex-manager from a 'like' industry working on an early British railway springs to mind. Let us go back to the South Western from which I will tell you a tale.

In 1852 Cornelius Stovin, the L&SWR's Traffic Manager, absconded to Canada with quite a bit of cash. I have always felt that the directors of the L&SWR must have been a little dim when appointing him. From a bit of detective work I think I have established Stovin's employment history which reveals that before he joined the L&SWR he had a shady past. On the 1851 census Stovin is listed as having been born in Birmingham. Stovin was appointed to the post of Traffic Manager on the 23rd February 1839 accepting the post on the 28th . Interestingly, his acceptance reached the company only days after a Cornelius Stovin, a stagecoach proprietor, was declared bankrupt in Birmingham. Given the unusual nature of the name and the geographical link, it is not unreasonable to presume this was the same person. Given that he got the job I also think it is not unreasonable to presume the L&SWR directors were a bit dim and should have done their homework. While this is an interesting tale, it shows that individuals who had worked in similar industries, that transported goods and people, did work in the early railway industry. This said, we know even less about them than the military men and it is again an area of research that needs further work.

Who was an early railway manager is something that I am keen to research further in my career. From this brief survey of the available evidence it is clear that directors employed individuals as managers who had worked in a mixed-bag of industries and came from many walks of life. No one knew how to manage a railway in the early days and this policy was the only option open to directors because there were no 'career railwaymen' in the labour market. It would take at least until the 1860 for the railway professional, who would spend their entire career in the railway industry, to really become established. But that is a topic for another post...