South West Trains, my local Train Operating Company (TOC), dumbfounds me a lot of the time. Some of the things it does, some of the ways it works, strike me as silly. Many of its actions just serve to heighten my suspicion that the only thing that motivates its management is to line the pockets of its owners' shareholders. This said, at times it does incompetent and costly things that beggar belief, that explain why it probably needs to milk the franchise for all it is worth. The best demonstration of this is in its attitude to the Oyster Card which from the 1st January could be used on all its services in the 6 zones that Transport for London (TfL) cover. 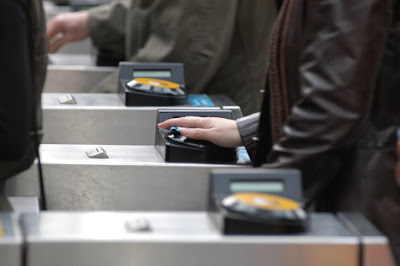 For those of you who are unaware of the Oyster card, this is an electronic ticketing device that you can use in the TfL area (basically greater London) to make journeys. There are card readers at every station and at the start of the journey you simply touch your card onto the yellow panel and then touch out at the end. If you have opted for the pre-pay option this will take money off your card's account. If you have put a Travel Card onto the Oyster then it just logs your journey and hands the data over to a government department (Ok...that last part I hope isn't true, but I'm as sure as heck the data collected has been used somewhere at some point). Usually single journeys from 'anywhere' to 'somewhere else' with an Oyster are cheaper than buying a paper ticket. I have always felt that for a system of travel it is perfect. Efficient, relatively hustle free and cheap.

Although they could have meddled with the names and concepts to make it a bit more interesting. Card readers sounds so droll, so mild, so boring. How about instead of 'card readers' they call them 'quest start portals'? And Oyster? Really? How'd they come up with that one? Even a 'Crustacean Card' would have sounded better. Continuing the 'quest' theme, what about 'Mighty Steed' card. Whims, I venture, but it could have been so much more interesting. Anyway, I digress.

Originally Oyster was only rolled out on the London Underground (and bus) services in July 2003. London Underground is run by TfL and is therefore nationalised. Yet the National Rail services are run by private TOCs and are therefore privatised. It was always hoped, and expected, by TfL and the Mayor, that in time the suburban routes of the National Rail operators, such as South Eastern, Southern, and our beloved SWT, would allow Oyster readers to be placed at their stations so that every traveller in London could enjoy its benefits. Of course when the Mayor at the time, Ken Livingstone, muted this, he had the door slammed in his face by the TOCs more than once. Yet, never a man to give up, Ken kept beating away like a persistent door-to-door salesman; getting to the point where he was sitting on the sofa with the TOCs, in their living room (it was a house share), with a cup of tea.

This process of getting Oyster on National Rail services took a long time for a number of reasons. Firstly there was the obvious one. TfL, I hope, is run in the interest of the public (this is of course unless you are Bob Crow) and therefore is a not-for profit organisation. The TOC's are really not. The implementation of Oyster on National Rail routes would mean that many of the fares between stations which the TOCs controlled themselves would actually be reduced as they would be brought in line with the fares of TfL's zonal system. In the end the agreement meant that while Oyster Rates on National Rail services are usually cheaper than the paper tickets, they are now set by the TOCs. Secondly it would mean a lot of investment in the network by the TOCs. The estimated cost of Oyster equipment at SWT's stations cost them an estimated £40 million. Therefore the negotiations, which went on before January 2009, were complicated and frustrating, but by mid-2008 most companies had agreed a deal with TfL. That is except SWT, dragging their feel like a petulant child who screams as everyone walks away.

Basically, I think, they hated the fact that this would be a heavy investment and cut into their immediate profits. This said, most children of this ilk do eventually have to be picked up and brought back to the family. SWT was no exception, and under heavy pressure from TfL and realising they were being left out, they agreed to adopt Oyster. Yet, for making the move they were given one very important concession. (this is the ice cream to calm the kid down).

As many of you will have found out no SWT ticket office will top up or put travel cars on your Oyster, or sell you the thing in the first place. This forces the traveller to go to the local 'travel shops' for all their Oyster needs. SWTs fatuous arguments were that the equipment was too expensive and also that selling Oyster services wasn't part of their franchise agreement. Hang on a minute, it wasn't part of anyone's franchise agreement.

I'm befuzzled, I cannot see why a company that consistently acts as though they only care about profit refuses to sell Oyster products at its ticket offices? While there would be an initial sunk cost, this would be soon made up in the cut they'd get from selling Oyster products. It's not like there isn't a precedent. The owners of the myriad of newsagents certainly, at some point, saw that they could make a bit of extra cash from operating Oyster machines. In addition all the London-connecting TOCs saw the benefit of having Oyster-selling equipment at ticket offices. So why can't SWT? I suspect it is again because it would cut immediately into their profit margin. This, for company who has got a ten year franchise agreement (2007-2017), is incredibly short sighted and is probably loosing them a lot more profit than they realise.

The short-sighted nature of SWT was brought home to me on Thursday. My usual route between Hampton Court and Waterloo is as follows. Firstly I go from Hampton Court to Surbiton, where I change onto the direct train to Waterloo. This train comes from Alton and is one of SWT's long-distance services. On Thursday, after enjoying a mere 7 minutes of stationary delight at Subiton station, I got on my usual fast train. Sitting reading my book I suddenly became aware of the Ticket Inspector, passing through the carriage. He got to me and I dutifully pulled out my Oyster. “Oyster eh”, came the response, “Not to worry,” and moved on without checking a thing. This is not the first time my Oyster hasn't been checked by a SWT ticket inspector, and I am sure it won't be the last. In addition I have a number of friends who have experienced the same thing.

The truth is that SWT staff simply don't have the device issued to most TfL staff to check whether Oysters are valid. Therefore if I am on a train without having 'touched in' at the start of my journey I would technically be travelling without a ticket and would be required to pay a fine of £20. Further there are ticket inspectors on services between stations with no ticket barriers (Whitton to Mortlake, Teddington to Strawberry Hill). Overall it begs the question as to why SWT staff don't have the Oyster checkers? Is the company slow? Have they forgotten something in the run-up to Oyster's introduction? It isn't like they haven't had the time to buy these devices for their ticket inspectors, and they are ten-a-penny elsewhere in London. I can't answer this question, but ultimately SWT haven't bought them and therefore again are loosing revenue. Again, this is possibly because they don't want spend the any more than they have to now, even if long-term this may loose them money.

Overall the point that I have been making throughout this post is that I feel that SWT, as a business, are not long-term thinkers. They care more about immediate profit and their dividends, rather than long-term gain in both reputation and financial terms. With this attitude we can only hope that this company, which I personally perceive as only acting in the interest of Stagecoach's shareholders, looses the franchise in 2017.
Posted by David Turner at 23:09