During World War Two Britain’s railways played a crucial role, hauling the goods, people and machines that allowed this country to make war. Indeed, in 1944 the freight ton mileage of Britain’s Railways was 50% above 1938 levels. However, when the conflict was over the railway network was in a horrendous state. Infrastructure had not been maintained adequately, obsolete locomotives were common place and the wagon and carriage rolling stock was run-down. This post will examine the state of Britain’s railways in 1945 and will summarise possible causes. I will be using statistics and information provided in Terry Gourvish’s British Railways 1948-73: A Business History (p. 3-5).

The maintenance of all sorts of Rolling Stock, locomotives, carriages and wagons, had fallen back significantly creating a maintenance and renewal backlog. On the 31st December 1938 only 6.04% of Britain’s total locomotive stock was awaiting or under repair (a 32% increase). Whereas on the same day in 1946 the proportion stood at 7.98%. Coaching stock had fared worse, and over the same period the proportion had risen from 6.52% to 12.52% awaiting maintenance or under repair (a 92% increase). It was Britain’s “little bob-tailed wagons” that had received the worse treatment, and on 31st December 1938 only 2.82% were awaiting or were under repair. However, by 31st December 1946 the figure had risen to 10.79% (a 281% increase). 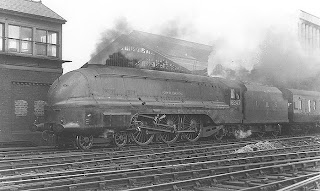 The causes of these maintenance deficiencies were simple. Many locomotives were at the end of their operational lives, had not been broken up because of wartime requirements and, thus, required heavy repairs. Wagon stock had been augmented by the railway companies acquiring 563,000 privately owned wagons during wartime, many of which were aging and obsolete. Indeed, more than 50% being over 35 years old. Lastly, passenger carriages, which had not been prioritised for renewals under wartime conditions, were falling to bits. The London, Midland and Scottish Railway (LMS) had approximately 22,000 carriages, yet, had only renewed a measly 16 per year between 1940 and 1944.

Alongside the evident problems afflicting the rolling stock, after the war the condition of Britain’s railway infrastructure was just as bad, if not worse. The increases in traffic had not precipitated an increase in track maintenance, which had reduced to 30% of pre-war levels. Indeed, in 1945 2,500 miles of track required maintenance, the equivalent of two years’ worth of work at pre-war rates of repair and renewal. Indeed, similar requirements were felt on the structures of the network, the bridges, the buildings, the tunnels etc.

The cause of these back-logs has been put down to the fact that the railways had a weakening financial position. The government had restricted railway earnings to £43.5 million per year, it retaining any revenue above this level. Thus, between 1941 and 1945 the railways earned £412.6 million pounds, but £195.3 million was retained by government. However, the restricted income was inadequate for all the maintenance required given the significant increases in coal, material and labour costs. Despite this, the government did not invest any more money.

Some of the surplus government retained went into an accumulating trust fund for deferred repairs and renewals, i.e. a fund for after the war. However, despite the pressing needs of the time, government thinking was that this fund would be sufficient to meet replacement infrastructure costs at ‘future prices’ [italics in text] which diminished the need for heavy wartime investment, some of which may be unnecessary. Furthermore, they felt that the money should be held back so that post-war renewals could be geared more towards changed national transport needs and ‘motive power policy.’

Yet, despite all these factors, Gourvish argued that much of the under-investment was due to wartime shortages and that ‘it may be difficult to accept that a more generous wartime policy towards railway investment would have succeeded in safeguarding assets which were, it is generally agreed, in relatively good shape in 1939.’ (p.5)

Whatever the cause, Britain’s four private operators, the Southern (SR); London, Midland and Scottish (LMS); London and North Eastern (LNER) and Great Western Railways (GWR), did not have the financial or physical resources to reverse the maintenance and renewal situation quickly or efficiency after the war. The result was that the Labour government nationalised Britain’s railways through the 1947 Transport Act, which came into force on the 1st January 1948 and created British Railways.