It has probably escaped no one’s attention that the three of London’s great stations, Euston, St Pancras and King’s Cross, are all in a line along the Euston Road. But why is this so? Why did the London and Birmingham, Midland and Great Northern Railways not push their lines further into the city, whether the passenger traffic that it had to offer could be more easily tapped?

The first railway lines to run through parts of London were of little consequence. The London & Greenwich and London & Blackwall Railways were short in length, on the outskirts of the city, built mostly on viaducts and any housing they cleared was slums. Indeed, clearing slums was an activity that landowners, parish councils and government were not going to complain about. More pertinently, these railways did not come into conflict with any of London’s major landowners and their construction was therefore relatively cheap.[1]

But thereafter, many of the major railways who wished to build termini in the capital did not attempt to penetrate the interior, as this would mean passing through parts of the capital where land-owning was well established, purchase prices were high and a degree of dispute was inevitable. Thus, many railways decided to finish their lines outside of London’s central zone. The Great Western Railway established their terminus at Paddington, the London and Birmingham’s line ended at Euston Square and the London Southampton Railway ceased construction at Nine Elms.[2]

However, during the railway mania between 1844 and 1847, the number of new railways promoted increased significantly. Indeed, in 1846 alone 272 were authorised by Parliament (with a third never being built).[3] With such fervour and with the available capital seemingly inexhaustible, many of these projects planned to drive lines right into London’s centre. Subsequently, in 1846 no less that 19 projects had plans to site termini within central London. But the multitude of plans brought alarmist reactions at the time, and Kellett argued that the new railways would ‘have completely altered the topography and character of west and central London, of Southwark and Lambeth.’[4]

Faced with the almost complete destruction of central London, the government decided that a Royal Commission should be established investigate the railways’ possible incursions. Indeed, the area of London under consideration was from Park Lane in the West, up to the line of the Marylebone and Euston Roads in the north, down to the Lambeth road on the south (shown in black on the map).[5] In the usual course of affairs, bills authorising the construction of new railways were considered individually by separate parliamentary committees. The commission on the other hand would call witnesses representing a wide range of bodies who would ordinarily not have a say in these committees and railway construction. Included were the Corporation of London, Parish bodies, the Surveyors of Pavements and Sewers, urban carriers of omnibuses, independent valuers as well as many others. 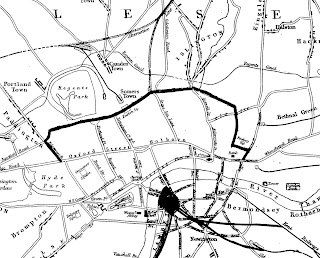 The result was that these voices dominated the commission’s deliberations, effectively silencing those of railway promoters and managers. Subsequently, the commissioners deemed that the promoters arguments, that railway lines into the centre of London would be of benefit to its population, were overstated. Indeed, the Commissioners stated that despite the fact that London residents may have to travel further if the railway companies were kept out of the centre, this inconvenience was worth it if the disturbance to the people and property there was avoided. Furthermore, as some of the projected lines crossed the Thames, naval concerns were also taken into consideration and the fact that the Admiralty might object to further bridges being built.[6]

As such, the commission recommended that only two of the 19 projected railway lines through the central metropolis should proceed. Both were located south of the river, and while one never got built, the other was the London and South Western Railway’s line to Waterloo. Furthermore, they suggested that one line be built across the Thames west of Vauxhall to link northern and southern railways. They also recommended that the limits of railway building into the centre that had been established, for example the no penetration between the Euston road and the river, be maintained. Lastly, and most importantly, they recommended that ‘under no circumstances should the thoroughfares of the Metropolis, and the property and the comfort of its inhabitants be surrendered to separate schemes brought forward at different times, and without reference to each other.’[7]

The commission only made recommendations that were not legally binding. However, it was important as it put in place a framework of ideas into the minds of legislators and railway builders when they approached new railway promotion and construction. Thus, in 1852 when the Great Northern Railway opened King’s Cross Station it was on the Euston road, the company not being permitted to go any further. Additionally, when the Midland Railway built St Pancras station between 1862 and 1868 it also did not go any further south. And whilst the commission’s core recommendation was eroded in the 1850s and 1860s through new termini being built over bridges coming from the south side of Thames to Victoria (1858), Charring Cross (authorised 1858, opened 1864), Cannon Street (authorised 1861, opened 1866) and Ludgate Hill (1864) stations; realistically it ensured that surface railways never truly broke into London’s heart.[8] 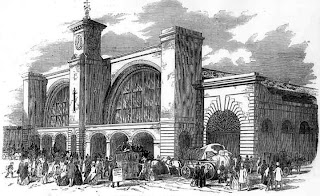