It is generally understood that in the late Victorian period most individuals started their railway careers shortly after leaving school. However, what is not so commonly recognised is that different employment practices were in place earlier in the period and many started their railway careers at later points in their lives. In this post I will examine the ages that clerks on the London and South Western Railway were appointed (L&SWR) to their first posts between 1840 and 1910. It should be noted, that I have also included in this study all cases where individuals were appointed to positions on the clerical career ladder, including junior clerks, chief clerks, goods agents and station agents.

The table below shows the age at which 200 clerks with surnames beginning with ‘A’ or ‘B’ were appointed to the company’s staff. Figures for the period 1880 to 1899 were unavailable as I have not photographed the records yet.

Conversely, the number of clerks of older ages declined. In the 1840s and 1850s the table shows that clerks were being appointed at a diverse range of ages. Indeed, in the 1840s 46.15% (6 out of 13 appointed) were appointed above the age of 30, and this had increased in the 1850s to 48.15% (13 out of 27 appointed). This would suggest that the majority would have had employment elsewhere beforehand, and this may have been in clerical positions either within other railway companies or other industries.

However, after 1860 the proportion of clerks appointed who were above 30 years of age declined. In the 1860s they constituted only 8.9% of all appointments (5 out of 56 appointed) and in the 1870s the proportion dropped to 2.70% (2 out of 74 appointed). Considering all clerks after 1900 were appointed in their teens, this indicates a change occurring in railway company employment practices over the period

In the early railways there were no railway professionals. Railway company managers, who had very little idea how to manage their new, but complex, businesses, looked to external sources to find the talented individuals needed to undertake the clerical and administrative work. Thus, while the L&SWR clearly did employ teenage individuals as clerks where available (possibly because they were cheaper), experience was a much more valued attribute at the time. However, as the L&SWR’s business matured and developed, it started to develop its own staff and turned less and less to external sources for labour. Indeed, the company increasingly opted for employing younger and younger individuals.

Thus, within the L&SWR was formed an ‘Internal Labour Market’ (ILM) whereby the company internalised a process, that of recruitment, that had previously occurred externally. The benefits of this for the company was that the cost of searching for labour was reduced and managers could be certain that the time taken training young clerks would not be wasted. For the clerks, the reduction in entrance ages meant that those entering the company later in its history would have far more structured careers ahead of them, good job security, the possibility of reaching management positions and, unless they did something wrong (and they did – see here), have employment for life. 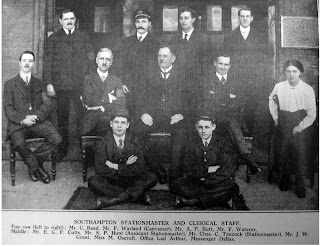