The Magazine Adverts of British Railways after World War One

After World War One the railway companies of Britain were not in a good state. However, after four years of being overworked they were faced with an old problem returning. Between 1900 and 1914 the number of passengers and goods the railways conveyed had levelled off, after a period of massive growth between 1870 and 1900. Naturally, under the stresses and strains of the wartime environment the traffic on the railways had increased dramatically. However, as the after-effects of the conflict started to die down, they were faced with the traffic problems of the pre-war period returning. This fact was highlighted when I looked at issues of Railway Magazine from September and November 1919, and February 1921. In these magazines the railway companies advertised services that they hoped would contribute to alleviating the faltering growth in traffic.

Interestingly, adverts for the companies’ passenger services were limited in number in the 1919 editions, coming from the Underground and the The Lancashire and Yorkshire Railway (L&YR). The Underground advertised ‘The Services to the Countryside,’ referencing that they, and ‘allied services,’ could convey individuals to ‘the Northern Heights, the Southern Downs, the forests in the east, the wooded plains and river-side in the West are all served partly and daily but mostly at weekends.’[1] 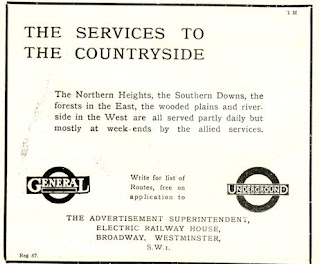 The L&YR’s advert for ‘Summer Season’ traffic in 1919 wasn’t so much an advert, as it was a warning. In rather stern tones it stated that ‘All passengers to the Blackpool and Southport districts on Saturday, September 6th will be required to obtain their tickets in advance.’[2] Indeed, ‘Passengers from Blackpool and Stations to Lytham travelling to Preston and beyond on Saturdays and Mondays, up to and including September 15th, must obtain a special ticket authorising them to travel by a specific train.’ The reason for the these harsh rules is unclear, however, after the wartime conditions it is quite possible that the resources that the L&YR had at their disposal to marshal unexpected passengers was diminished and, therefore, the company wished to be able to plan their operations more carefully.

The small number of adverts advertising passenger services can possibly be put down to the fact that many men were still in uniform at this time and that they were unavailable to travel for leisure, and that wartime conditions for all were still in place. Furthermore, with passenger levels still buoyant given wartime conditions were mostly still in place, the railway companies perhaps did not feel the need to advertise their services in such a manner. However, by the February 1921 edition it is clear that the companies were now trying to capture passenger traffic that was being challenged by passengers moving to trams and the beginnings of motorcar ownership.

The Great Central Railway (GCR) was advertising their ‘Health and Holiday Resorts Guide.’ The London, Brighton and South Coast Railway (LB&SCR) were promoting their ferry services which, in their words provided ‘The shortest and most comfortable route to France, The Riviera, Switzerland, Italy, Pyrenees, Spain and All Parts of the Continent.’ The South, Eastern, Chatham and Dover Railway (SEC&DR) were doing the same, and were also claiming that they provided ‘the shortest sea routes to the continent.’[4] Indeed, the Great Eastern Railway (GER) was also following suit, although its only claim was that it had ‘the most luxurious steamers between England and the continent,’ presumably because in no way could they argue they had ‘the shortest routes.’[5] Lastly, the L&YR was advertising its ‘Exchange Station Hotel, Liverpool,’ and was in its estimation the ‘nearest First Class Hotel to the Landing Stage, exchanges, and Principal centres of Business.’[6] Lastly, the Metropolitan Railway and the GCR were advertising housing developments near their railways where individuals could live, which would assure the railway companies of their patronage.

Throughout this period the railway companies were also trying to capture the more goods traffic through indirect means. In the all editions of Railway Magazine they advertised the lands adjoining or near to their lines that could be purchased by businesses. Some of their land was the companies’ own, but mainly they compiled registers which individuals could consult of those wishing to sell land or properties. The London and South Western Railway’s (L&SWR) notice stated that ‘if you require premises or land for business development, write giving particulars and we may be able to put you in touch with just what is wanted.’[7] Thus, in the September 1919 edition, the GCR, Midland and South Western Junction Railway, Kent and East Sussex Railway, East Kent Railway, Shropshire and Montgomeryshire Railway, Weston, Clevedon and Portishead Railway, GER, Rhondda and Swansea Bay Railway, SE&CR, London & North Westen Railway, L&SWR and the Great Western Railways were all advertising these services.[8] 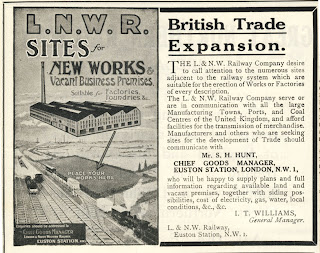 These advertising campaigns were logical for the railway companies to engage in, as by putting potential purchasers of land in touch with sellers who were close to the railways, they would keep business near the railways and capture the trade emanating from them. In addition, it allowed the railways to be far more aware of what businesses were in their operational sphere and they could than manage their requirements better. Of course, in the period before the war businesses would have naturally set up near railway lines as the railway companies dominated to freight transportation market. However after the war the expansion of road haulage firms, using sold-off ex-army vans, began to challenging the railways’ dominance in transport services. Thus, the adverts and the property registers were a way of counter-acting this new threat to their businesses.

Thus, in the post-war period (and at other times) what the railways advertised and how they went about it was shaped by what the state of the business environment they were operating in.