There is a debate going on in the world of all things ‘railway.’ The building of Britain’s second high speed line, or HS2 as it is more commonly known, fills the pages of newspapers, magazines, blogs and websites, with those in the ‘yes’ and ‘no’ camps fervently arguing their corners. Indeed, such is the storm that has been whipped up that some campaigners use fall into trap of using emotional arguments to try and win the debate, disregarding evidence and research. However, the emotion involved can some times obscure  the central question at hand; does the nation need a high speed line to accommodate future passenger traffic growth?

The response of those who oppose the line to the projected passenger growth centres on the idea that the existing rail network will be able to be upgraded to accommodate the increasing traffic. This may have some credence, and the network does have the capacity to be modified to allow faster, longer and improved trains, as the West Coast Main Line was in 2008. On the other side of the argument, the supporters of the line argue that routes between London and Birmingham, Manchester and Liverpool will start to breach their capacity before 2030 even with modification. Indeed, they believe that while upgrading the West Coast main line is an option, this can only go so far given that the Victorian network’s twists and turns prohibit high speeds. Thus, HS2 is not just desirable, it is a necessity.

Yet, for all this back and forth debates, I believe a central issue has been overlooked and ignored by most involved. Simply put: will passenger traffic actually continue grow at all? Clearly, those who support HS2 think it will. But even those who oppose the line, and dispute the pro-HS2 camp’s predictions of how quickly traffic will increase, still accept that more and more passengers will ride the rails.  Indeed, most accept future passenger growth is a reality on the basis that passenger numbers have grown between 1994 and last year from 735 million in 1994 to 1320 million (see graph below). But, I have seen very little in my reading that even mentions the idea that passenger numbers will plateau or even decline in years to come. I have seen projections of how passenger numbers could increase, but this simply isn’t the same as saying they will increase. Therefore, everyone in every camp is making a massive assumption.

However, this assumption isn’t new, has been made before by railway mangers, directors and commentators. A conversation with anyone in a position of influence in the late Victorian railway industry would have elicited no inkling from them that the massive traffic growth of the period would slow. The graph below shows that between 1870 and 1900 passenger growth increased at a rate at which not even the most astute railway mystic could predict, from 337 million to 1115 million. Indeed, the idea that traffic and revenue growth would never slow was the premise upon which almost all railways invested and embarked on new projects. Thus, those deciding current transport policy, as well of those not deciding it, have fallen into the same mind-set: “Passenger numbers will grow, so let us prepare happy in the knowledge that our assumption will pan out as expected.” 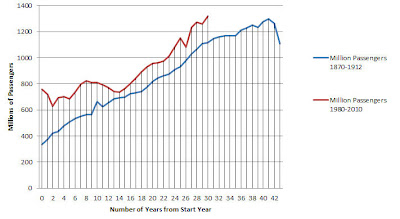 But this reasoning fails to appreciate that traffic growth is not always assured, as Victorian railway managers found out to their horror. The ever-increasing passenger (and goods) traffic numbers of the 1890s deceived railway companies’ managements. They thought that whatever investment they made in their networks would, in time, give healthy returns to shareholders because of the continually increasing traffic and revenue. Consequently, capital investment in the late Victorian period was large, including the myriad of light railways, the rebuilding of stations, a multitude of small works at stations and yards, and the Great Central Railway’s expensive extension to London.

Yet, as the graph shows, passenger traffic growth on Britain’s railways slowed after 1900 and started to decline beyond 1911, as the railways’ trade came under attack from new forms of transport such as trams and motor transportation. Indeed, after the First World War Britain’s passenger numbers went into further free-fall. Thus, all the major capital projects that had been started and finished before 1900, as well as those that were continued on with after it, were building capacity into the network that was simply not needed.

But there was another problem after 1900 that affected the railway industry. In the 1890s railway companies’ costs had risen and their profitability had fallen, making their shares were less attractive to investors after the turn of the century. Consequently, their access to capital was diminished.  This meant that the progress of many major capital projects had to be slowed. But, more importantly, because capital costs were already high the railways’ could not easily invest in the infrastructure to counter the new forms of competition. Thus, the casual acceptance by railway officials before 1900 that traffic and revenue would continue to grow, weakened the industry's financial position after it.

Of course, I am not necessarily saying that the current upward inertia of passenger numbers will slow in the years to come. Indeed, there is an important difference between the trading environments of the Victorian period and those of the current day. Before 1900 the railways had a virtual monopoly in inland transportation, the competition they had was negligible, and their officials found it much harder conceptualise that any external threats that would challenge their long-established hegemony. Contrastingly, in the current trading environment the railways’ competition is already in existence (unless some Star Trek-esque transporter equipment is developed) and transport policy is directed by the Department for Transport. This makes future passenger growth easier to predict.