I have repeatedly commented that Victorian railwaywomen are little studied by historians. Indeed, men’s dominance of the workforce has meant that women’s roles have been overlooked. However, this problem is compounded in the case of women working in the early railways as there is a chronic lack of investigation into railway history before 1870 generally.

Therefore, I felt that the working lives of Britain’s earliest railwaywomen were in need of investigation. I used ancestry.co,uk’s railway employee database to search for women that worked on the railways between 1830 and 1860. This was not an exhaustive survey of the available files as I was unable to simply search for them by gender and their years of employment. Consequently, I resorted to using popular women’s first names from the Victorian period with the hope that results would be returned. Happily, I found the records of sixty railwaywomen’s who were working in four railway companies.[1 – distribution of records by company are at the end] Furthermore, I believe more were available and I will have to go back and expand my research. The findings were not startling, but they do make for interesting reading.

Unsurprisingly, as the industry grew increasing numbers women were employed by the railways. Keeping in mind that this only a preliminary survey, no women have been found that worked in the 1830s and only two were discovered from early 1840s. Indeed, the first woman on the list is a Mrs Fuller who was employed by a housekeeper by the London, Brighton and South Coast Railway (LB&SCR).[2] (Note: other women have been found by historians that were employed earlier - See: Wojtczak, Railwaywomen) It was in the late 1840s that women started to be employed by railways large numbers, as the table below shows. Furthermore, as the industry expanded in the 1850s the number obtaining positions increased more rapidly. 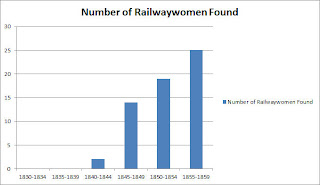 The range of occupations women were engaged in were limited. Twenty-four were engaged in cleaning duties of some type. Nineteen were employed as Office Cleaners, such as Elizabeth Blackhouse who started work on the 10th October 1853 at Ashton on the Manchester, Sheffield and Lincolnshire Railway (MS&LR)[3].  Three others were also classified as ‘Charwoman’ and one was just noted as being a ‘cleaner.’ Furthermore, there was a startling moment when I came across Sarah Dyson who worked at Huddersfield on the London and North Western Railway (L&NWR) in the early 1850s. She was listed as ‘Station Keeper.’ Was this, I thought, one of Britain’s earliest Station Mistresses? Predictably it was not, and a second staff record confirmed she was a cleaner there.[3] Ultimately, and has been recorded elsewhere, most of these women would have received their posts as an act of charity from the company when their husbands were killed or incapacitated by accidents on the railway.

The second largest employment group were gatekeepers and twenty-three women were employed as such, mainly on the LB&SCR. These women’s circumstances are hard to determine without more detailed research, however, other sources would suggest that many would have been the wives of railwaymen. Indeed, some gatekeeper’s records were next to those of other railway employees, such as signalmen, who had the same surname and were based nearby. Furthermore, Ann Hunstead[5] and Frances Earl[6] who were appointed by the LB&SCR to different gates near Berwick in 1849 and 1857 respectively, were both recommended by Mr Oliver of the Permanent Way Department. This suggests that they were the wives or widows of men working on the line in the area, for example platelayers or inspectors. Overall, gatekeeping positions were clearly given to women who already had some association with the railway company through marriage.

What did surprise me is that only seven women were employed as attendants in some form. Six were employed as ‘Ladies Attendants’ and would have looked after Ladies Waiting Rooms where they existed. Indeed, smaller stations did not have separate waiting rooms for men and women and this is confirmed by the fact that all six women were working at large stations that would have had them. They were based at London Bridge (Sarah Kays, Mary McRae), Rugby (Mrs Gillings, Caroline Stephenson) and Wolverton (Thirza Cowdell, Sarah Topsham).  Mrs A Chase, who was a ‘Waiting Room Attendant’ at Brighton also may have worked in a women's waiting room.[7] Again it is likely, as I have pointed out in an earlier post, that most of these women’s’ husbands would have been killed or injured while in the railways’ employ.

Probably the most interesting find was that four women were working as clerks for the LB&SCR, with the earliest being Margaret Savage who was appointed at Three Bridges Station in 1855. Indeed, this is the earliest known female clerk on Britain’s railways so far. Of the four, three were ‘Telegraph Clerks’ who would not have met the public and were ‘back office’ workers. However, another interesting discovery is that Margaret’s sister, Harriet, was also employed at Three Bridges as a Booking Clerk in 1857. Thus, this would make her the first woman to serve passengers in such a capacity. Ultimately, Margaret and Harriet would not have obtained their positions if it were not for the fact that their Father, Thomas John, was the Station Master there.(see above image) [8] Indeed, all four women employed as clerks were the daughters of Station Masters. Consequently, this suggests that the only route for women to obtain these higher status occupations was to have a father who was in a senior position.

Ultimately, this short survey should be treated with caution given the limited survey size, the high proportion of LB&SCR employees in it and the availability of documentary evidence. Yet, it does confirm statistically that the majority of women working on Britain’s railways in the 1840s and 1850s would have been in menial positions and all were dependent on men to obtain employment (even if they had been killed). In the next post I will explore the variable relationships that the women had with their employers.