What Do You Want Your Railway to Do? - The L&SWR and the Need for a Corporate Vision

Some observers of the Britain’s railway system argue that current problem with the industry is that no one asks what Britain’s railways are for. Indeed, this lack of purpose harms the ability of the industry’s component players to work together, plan long-term or deliver a railway that is truly serving the people of this country. However, this is not simply a modern problem, and railway managers in the past also failed to define what their businesses were trying to do. Indeed, the case of the London and South Western Railway (L&SWR) shows how the application of a corporate vision can take a business from failure to success.

Under Scott his very fixed ideas about how railways should be managed shaped company policy. He believed that because the railways’ had a monopoly on inland transportation, traffic and revenue would increase unabated. Consequently, to keep costs down and profits high improvements to train services, infrastructure and rolling stock were only sought from the Traffic Committee and Board when really necessary. Indeed, he believed that with no competition on many routes, it did not matter if the customers were unhappy as they would to use the railway anyway.  Thus, train services, stations and carriages were left in such a poor state during Scott’s administration that Punch nick-named the company’s management the ‘Wags of Waterloo.’

However, after 1870 these policies caused the company’s profit margin to be the smallest of the all Britain’s fourteen largest railways. This was because every potential improvement was looked at on a case-by-case basis with the minimisation of cost being the only factor in the decision. Thus, there was no joined-up thinking about overall company strategy and problems were simply solved in the short-term. Furthermore, no thought was given to growing the business beyond the traffics the company already served. Ultimately, this meant that while in the short-term costs were kept down, in the long term the company did not have an established trajectory, forcing up overall costs.

Charles Scotter became the company’s General Manager in 1885 and rapidly set about turning the company’s fortunes around by bringing a vision and direction to the company’s policies. On his retirement in 1897 the Railway Magazine (RM) wrote that he was keen that ‘the line should live down any unfavourable reputation which it might have earned, and he found that the policy of giving the best possible facilities to the travelling public was the one at which at the same time, yielded to proprietors the highest dividend.’ 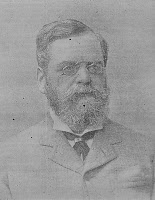 The majority of Scotter’s reforms related to reversing the policies of Scott in the Traffic Department through improving the company’s services. Scotter did not, however, simply expand services uniformly and judged carefully where it would be advantageous to improve provision. To do this he engaged with the public and business people within the company’s territory, listening to their requests, even if they could not always be satisfied. Thus, the company’s train services, rolling stock and infrastructure improved in line with the public’s needs and beyond. No longer did the railway dictate to the customers what services they received, rather, the customers now had input on them. Thus, RM stated that Scotter had ‘led the proprietors step-by-step into fresh fields of traffic.’

Overall, Scotter’s tenure at the L&SWR was a success. RM stated, ‘there is no instance on record in this country where such striking results have been produced by a railway manager as those which have, within the short period of twelve years, attended the policy pursued by Sir Charles Scotter.’ Indeed, the company’s profit margin aligned with the average of the top fifteen companies and its share price rose from 118d per hundred shares in 1885 to 224d per hundred in 1897.[1]

Therefore, this case study shows why it is important for businesses to have corporate goals. Scott’s simplistic ad hoc approach to management, of simply minimising cost, delivered poor company profitability and an even poorer public image. However, Scotter’s arrival and the application of a corporate vision brought the L&SWR good profitability and wide praise. Indeed, this suggests that those in charge of Britain’s railways in the 21st century really do need to ask the question of what the railway is for, so that they can ascertain where they want their industry to be in twenty or thirty years’ time. Such a step would allow everyone employed in the industry to be working towards the same goals, improve industry efficiency and deliver the British travelling public better value for money.