Sadly, railway accidents were common occurrences in the Victorian railway, and both passengers and employees could not fail to be aware of the scale of the loss of life and limb in the period. Indeed, the July 1888 the South Western Gazette, the London and South Western Railway’s staff magazine, published details on all the accidents that occurred on Britain’s Railways between 1880 and 1887. Thus, this gave a useful snapshot of the state of railway safety for both employees and passengers in the period.

The first table that the Gazette presented was a list of those individuals killed or injured in accidents on trains between 1880 and 1887 (above). This showed that over the course of the 1880s that the number of accidents dropped and in 1880 51 individuals had been killed, whereas in 1887 the total was 25. However, the Gazette commented that the 25 passengers who lost their lives in 1887 did so in one accident at Penistone on the Manchester, Sheffield and Lincolnshire Railway, and had not been for this event ‘some 800 millions of passengers without the loss of a single life.’ More significantly, the number of injuries declined, which is more indicative of changes of railway safety. While in 1880 1,023 individuals had been injured, by 1887 the total was 647.

The decline in train accidents can be attributed to improvements in railway safety. No major safety legislation was introduced in the 1880s, but two technologies were gradually spreading through the British railway network.

The first was the block system of train control.  Originally trains were allowed to proceed along lines only after and interval of time. This meant that if a train got delayed, the one behind would be given permission to proceed after a set duration, which would put both at risk. However, in the 1870s and 1880s this was gradually replaced by block systems. This was where the track was divided up into sections, and a train following another was not allowed to enter the ‘block’ section in front until any preceding train had left it. Most train movements in and out of block sections were controlled by individual signal boxes connected by telegraphs. While the technical details of the block system, which is still in use today, are unimportant, its gradual introduction in this period by railway companies dramatically improved safety.[1] 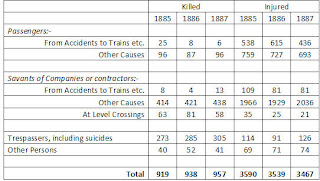 Secondly, continuous brakes on locomotives and passenger vehicles became more widespread. The principal of continuous brakes was that when the driver applied the brake on the locomotive, the wheels of the coaches did the same. While legislation on this was not in place until 1889, after the Armagh Accident, many companies began to fit three competing brake systems to their rolling stock from the early 1880s. The detail of which systems were adopted by which companies is unimportant. However, two systems used a vacuum maintained by the train, and another, the Westinghouse system, was an air brake.[2] Therefore, this improved the reliability of braking systems generally, as now whole trains could be brought to a halt. Indeed, this explains the drop in injuries, as now in the when a train applied a brake sharply, carriages did not smash into each other as easily. 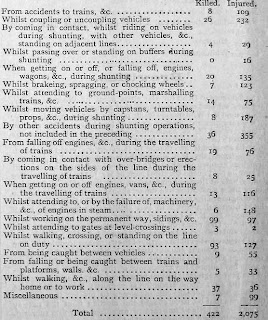 Despite improvements in accident rates on trains, there was seemingly no improvement in the number of other accidents that occurred elsewhere. The table above shows that between 1885 and 1887 the number of people killed on railways in total increased. The numbers injured decreased, however, this was only because of the decline in injuries to people on trains.

Interestingly, the article also gave the most common causes of injury (left) in 1887. The most number of injuries, 355 in total, were attributed to ‘other accidents during shunting operations, not included in the preceding’ (the preceding being: ‘while moving vehicles by capstans, turntables props &c. during shunting – 187 accidents.’) The second most common form of accident occurred ‘whilst coupling and uncoupling vehicles,’ 232 happening in this manner. Fatalities predominantly occurred in shunting operations. The most number of deaths, 99 in total, were when individuals were ‘working on the permanent way, sidings &c.’ Following this, 93 individuals were killed ‘whilst walking, crossing, or standing on the line on duty.’ Thus, it was people actually working on the line itself that most frequently were killed. 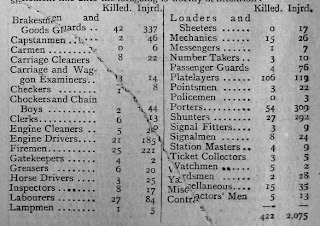 What individuals were doing when they were killed or injured was reflected in the types of employee were involved in accidents the most (right). As expected, those individuals who were involved with coupling together trains were injured the most, and 337 Brakesmen and Goods Guards, 309 Porters and 292 shunters, were so. Furthermore, it is unsurprising that the individuals who were killed the most were platelayers who maintained the line, and 106 died, presumably through being knocked down by a train.

Overall, this small study has revealed that while the railway was an increasingly safe place for those travelling by train, whether they were passengers or railway workers, for those who were actually employed by the railways the risk involved did not diminish. This would challenge any idea that in this period railway work became safer for employees, when only a small proportion benefited from the safety devices that were introduced.