In my last post (here) I looked at possible factors that may have affected the number of accidents British railway workers suffered in 1884. I did this through correlating the accident rates of thirty-one English, Welsh, Scottish and Irish railway companies’ against other operational statistics (Included were 21 English and Welsh companies, 4 Scottish and 6 Irish). I concluded that working for a Scottish railway company, as opposed to English, Welsh or Irish one, put a railway employee at greater risk. Furthermore, in what was ultimately a futile exercise, I discovered there was no correlation between the accident rates in each company and the number of staff they employed. In this post I will examine whether the proportion of goods and passenger traffic the companies carried played a role in accident rates. Furthermore, I will assess if the intensity of train operations on companies’ lines was a factor. 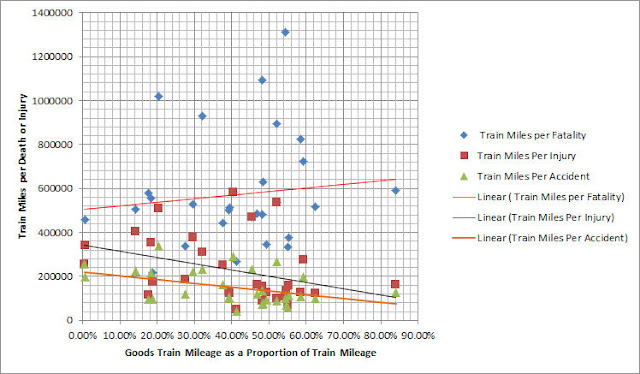 Personally, I would have expected that as the proportion of good operations increased, the frequency of death would also rise. However, the evidence slightly suggests otherwise. Firstly, as the goods train miles increased proportionately, there is weak evidence to suggest that the number of deaths per train mile also decreased. However, there are significant anomalies. Indeed, the Furness railway, of which 54.40% of train miles were run by goods trains, had a very low fatality rate, with one death every 1,311,973 miles. However the correlation is so weak, and skewed by these anomalous results, that there isn’t enough evidence to suggest that the regularity of deaths changed dependent on the level of each company’s goods operations.

This said, there is much stronger evidence in the graph that as the proportion of goods train operations increased, so did injury rates. Indeed, The Metropolitan and District railway, on which only 0.60% of train miles were run by goods trains, suffered one injury every 457765 train miles. However, 84.12% of the Taff Vale Railway’s train miles were undertaken hauling goods and it suffered one injury per 590278 miles.

Lastly, as the third set of data indicates as the proportion of goods train miles went up, the frequency of accidents, irrespective of the outcome, also increased. Indeed, this is the best correlation, and no figures are included in that can be considered wildly anomalous. Thus, overall, there clear evidence that working for a company that hauled more goods than passengers, was more dangerous.

But perhaps another factor played a role: intensity of train operations. To determine this figure I calculated the number of train miles run by each company per mile of track they owned (route miles), and plotted this against the number of route miles to each accidents (overall), death and injury. Thus, this would show if companies that on average had the most intense operations per mile of track, suffered more or less accidents. The results are shown in the scatter graph below. 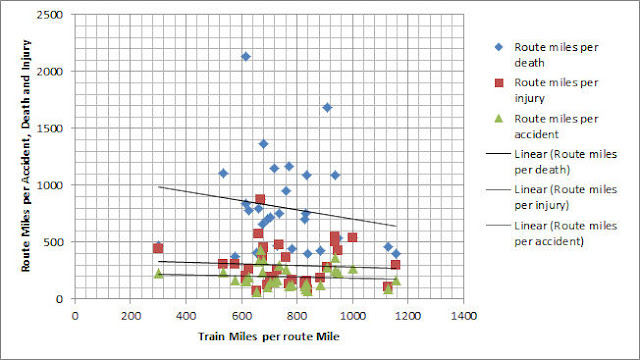 Firstly, the evidence suggests the intensity of train operations did not really affect the fatality rate. While the linear line goes down, the actual results are wildly scattered, with very little correlation at all. Thus, the mere fact that companies had higher intensity networks did not realistically impact on the number of employee deaths, suggesting that other factors played a role, for example the nature of the company's traffic, as shown above.

Furthermore, the number miles per injury were not, seemingly, affected by the intensity of the companies' networks. Indeed, while their are many anomalous returns, the majority spread out in a line along the x-axis. Additionally, the figures for route miles per accident, irrespective of outcome, show that higher intensity operations did not affect overall accident rates. These are the best results, and the returns spread out with lowest deviation above and below the linear line.

Thus, from the statistics considered in this and the last post, the location of railway companies and the type of traffic they transporting have been shown to have affected accident rates in 1884. Indeed, a company operating in Scotland and having a higher numbers of goods trains compared to passenger must have been a very risky employer. However, it should also be remembered that other considerations, which cannot show up in these figures, would have affected accidents rates further. Indeed, some of the responsibility for varying accident rates must be placed on managerial factors, such as companies having a diverse range of safety regimes, the technologies they purchased, different rules and regulations and the quality of employee supervision. Thus, as with very post I write, more research needs to be done.
Posted by David Turner at 21:04