The Rise and Fall of the Second Class Passenger

These days we only have one numbered class of travel, first class, and what was originally known as third is now designated ‘standard.’ Yet, I was recently asked by someone about what happened to second class, given that the mere fact that we had first and third must denote that at some point we had a second.

Before the railways arrived, the two main modes of transport were stagecoaches and steamships, and these only employed only two classes of travel. Apart from the mail coaches, which charged a premium for travel, most stagecoaches had two classes of passenger. Those paying the higher rate were carried inside, while those on the outside, who were forced to brave the elements, paid a lower rate. Similarly, those travelling on steamships either had ‘cabin’ or ‘deck’ accommodation.[1]

Yet, a glance at some shipping adverts from 1831 (left) shows more nuance in pricing. The steam packet service to the Channel Islands, while offering both ‘cabin’ and ‘deck’ accommodation, also offered ‘fore’ and ‘main’ cabins at different prices. Additionally, the ship to the United States offered steerage accommodation with or without ‘provisions.’ While these adverts would suggest there were three classes, in reality there were only two, and individuals could simply pay more for additional services while travelling. Indeed, there were not three distinct levels of service quality, each different from the other.[2]

Initially, the railways copied this two class system. In 1830 the first inter-city railway in the world, the Liverpool and Manchester Railway, had first and second class accommodation. Indeed, like on the steamships and stagecoaches, first class travel would be enclosed, whereas second class would be open. The two-class system was quickly transferred to other early railways, and an advert for the Warrington and Newton Railway (shown), opened in 1831 and which connected with the Liverpool and Manchester, shows this.[3] 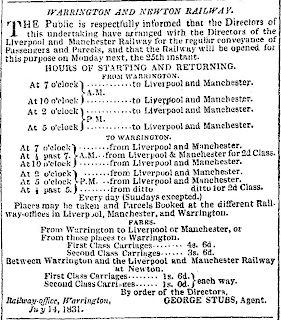 However, by the late-1830s the three class system had become the norm for all new and existing railway companies, even though third class carriages were not necessarily attached to each train. The railways could do this because the speed at which trains conveyed passengers meant that they could offer a range of services which were of varied quality.

The three classes of travel would continue undisturbed until the 1870s. First class passengers always had the best accommodation, their compartments containing soft furnishings and window glazing. Initially, second class carriages had roofs and padded seats, but were usually still open to the elements on either side. However, this latter feature did become less common up to the 1860s. Lastly, third class passengers travelled in little more than open trucks with wooden seats. On the Sheffield and Rotherham Railway’s opening in 1838 a reporter suggested these carriages would be ‘preferred in fine weather.’[4] Nevertheless, by the 1860s most third class carriages had been covered. Ultimately, all that could be said about changes in carriage design before 1870 was that they had got longer.

It was in the 1870s that the decline of second class travel began. On the 1 January 1875, after adding third class accommodation to every train in 1872, the Midland Railway abolished second class travel completely, while lowering the price of third. Furthermore, they downgraded the quality of the second class carriages by removing the leather backs of the seats, while also improving the quality of the third class accommodation by covering the seats with the same material and padding.[5] In addition, the company introduced carriages on its new Settle to Carlisle route which were twice as long as contemporary designs, had improved ride comfort because of swivelling bogies and which combined first and third class compartments. 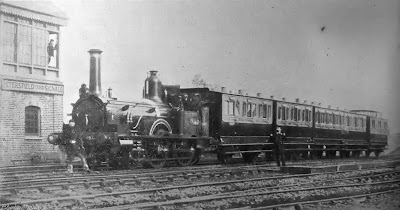 The Midland undertook this pioneering action because of the forces acting on its business. Whereas in 1859 32.23 per cent of all railway passengers in the British Isles were travelling by second class, by 1874 the proportion was only 15.12 per cent. Furthermore, over the same period, the proportion of individuals travelling by third class rose from 49.92 per cent to 76.66 per cent. Indeed in the Midland’s case, the proportion of passengers travelling second class dropped from 23.37 per cent to 11.24 per cent, lowering the profitability of carrying them. [6] Therefore, eliminating second class accommodation reduced the cost of carriage construction and marshalling for the Midland. Furthermore, the improved third class accommodation would entice customers who would normally travel third class from competing railways. Indeed, to try and capture more of the quickly growing third class market was a shrewd business move.

It is unsurprising that many other railway managers protested at the Midland’s changes, presumably because of the precedent they set. Furthermore, those passengers that were not wealthy enough to purchase first class tickets, but purchased second to avoid the ‘rowdiness’ of the third class environment, also reacted with dismay.

Nevertheless, the Midland’s actions naturally meant that the other companies started examining the viability of their own second class accommodation, as well as increasing the size of their rolling stock. Indeed, the larger carriages constructed after the 1870s included higher quality third class compartments which attracted increasing numbers of people to this class of transport. Consequently, this helped second class travellers to diminish in number from 22.2 per cent of all passengers in 1870 to only 6.0 per cent in 1899.[8]

However, those companies who derived a higher proportion of their revenue from passenger traffic held on to second class for longer, given that they made healthier profits from this traffic. Indeed, in 1881 a report to the London and South Western Railway’s board by the General Manager, Archibald Scott, stated that he felt the reductions in second class accommodation on the northern railways were a mistake. Indeed, given that second class traffic remained an important source of the company’s income, constituting 25 per cent of passengers and one sixth of all travellers, he recommended that it should remain, which it did.[11] Indeed, his successor, Charles Scotter, also argued in 1894 that second class should be kept on the London and South Western given that it still ‘paid.’ However, he did recognise that the company’s case was ‘exceptional’ given that on other companies it did not so.

Ultimately, however, the even the companies dominated by passenger traffic also stopped offering second class accommodation as the proportion they carried fell. Thus, the London and South Western and South Eastern and Chatham Railways preserved it on main line services until 1918 and 1923 respectively.[13] Indeed, the latter was the last company to provide it on a British trunk line.[14] The last vestiges of second class were to be found on London and North Eastern Railway suburban services until 1938 and Southern Railway boat trains until 1948.[15]

Overall, second class had been killed by the higher quality of third class accommodation and ever-increasing numbers of third class passengers. With fewer and fewer people using it, the railways, driven by profit, no longer felt the need to provide it.