Slavery and the Financing of Britain's Early Railways: A Consideration

At the current time I am part of a wonderful organisation called History Lab. If you haven’t heard of it, the ‘Lab’ is a network of history postgraduates operating out of the Institute of Historical Research at Senate House, Bloomsbury. We run events for postgraduates including socials and workshops, as well as hosting papers from PhD students where they can present their research. Thus, History Lab brings postgrads together to learn, share experiences and exchange ideas in a friendly atmosphere.

It was in this environment that that I chaired a seminar last Thursday really got my neurons firing. A fascinating paper was given by Katie Donnington, from University College London (UCL), entitled ‘Feeding the ghosts: George Hibbert, the West India Docks and the re-memory of slave-ownership.’ at one point she mentioned that while the slave trade in the British Empire ended in 1807, it only became illegal for British residents to own slaves thirty years later through the Slavery Abolition Act of 1833. This law technically freed most of the slaves in the colonies on the 1 August 1834. However, the reality was that those over the age of six were simply redesignated ‘apprentices.’ Nevertheless, the apprenticeships were eventually abolished in two parts on the 1 August 1838 and on the 1 August 1840, at last freeing the slaves.

For the slave owners the act took off their hands a piece of property, the slaves. However, it also allowed them to claim compensation from the government for their loss.  To fund this massive pay-out the government was permitted to raise £20 million, which constituted 40% of its total annual expenditure. Thus, by 1837-38 over 40,000 separate awards, totalling this amount, had been made to slave-owners.[1]

Katie’s’ paper highlighted the fact that as a slave-owner George Hibbert received compensation. Furthermore, she mentioned that he had been one of five brothers, many of whom also had interests in plantations and would have owned slaves. Indeed, this particularly interested me given that on the board of the London and South Western Railway, the company I study, there was a John Hibbert between 1835 and 1852. Now, I have found nothing so far to suggest that the men were related (in fact one piece of evidences suggests they weren't), yet Katie’s the paper did raise for me compelling questions regarding the possible links between slavery and the early financing of Britain’s railways.

Firstly, there is the possibility that much of the £20 million compensation paid to slave owners ended up in the capital accounts of early railway companies and funded their construction. Indeed, with the plantation owners having to now pay their labour force, which possibly damaged their businesses profitability, they may have seen the railways as good investment opportunities. The table below shows the total share capital raised by Britain’s railways between 1825 and 1843.[2] 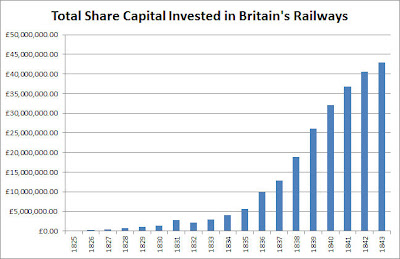 This indicates there was a significant increase in investment in the railways in the mid to late-1830s, just as the slavery compensation money was being paid out. Indeed, it was only in 1839 that the share capital invested in Britain’s railways exceeded the total figure of the compensation, £20 million. Furthermore, the money may have played a significant role in fuelling the speculative frenzy of the first great railway mania between 1835 and 1837, in which parliament authorised 1,500 railway route miles and £34.6 million in capital.[3] Consequently, it is highly likely that the slave owners who were compensated invested in a the railways in a big way.

Furthermore, there are questions as to whether plantation owners were investing in the railways before the 1833 act, either to improve their business interests, or because they saw that the wind was turning against slavery and its abolition may damage their business’ profitability. Some evidence has been found that slave owners invested in railways before 1833. The Liverpool and Manchester Railway had slave owners on its board from its initial promotion in 1821 (opened 1830) and this is unsurprising given that Liverpool’s success as a city had been built on the slave trade. Indeed, John Moss, the company’s first chairman and later chairman of the Grand Junction Railway, was a noted slave owner.[4] However, the tiny amount of digging I have done has only found this one case, and I am sure there are more to be discovered.

Overall, what I have presented here are not conclusions, but considerations, and more research clearly needs to be undertaken to determine the links between slavery and the railways. Indeed, the ‘Legacies of British Slave-ownership’ project at UCL, and of which Katies’ PhD is one part, is putting together a database of all the individuals who owned slaves in the British Caribbean in the 1830s.[5] Thus, when this database becomes available online I will certainly scan it carefully for early railway investors, promoters and directors. In the meantime, I will just have to be content with the ideas that one [excellent] seminar at History Lab stimulated.

More information on History Lab can be found HERE