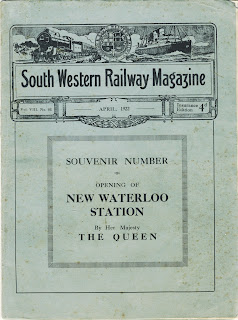 This, believe it or not, is my 200th post on the TurnipRail Blog (Note: All images are clickable). So, to commemorate such a momentous occasion, I thought that I would look at the opening of the rebuilt Waterloo Station in 1922. This is aided by a copy of the London and South Western Railway’s (L&SWR) staff magazine, the South Western Railway Magazine (SWRM), which I acquired on ebay and which commemorated the event. Purchasing this item is big occasion for me because the station is important in my life and I have grown fond of it. Not only do I pass through Waterloo once or twice a week, but its rebuilding is featured in the last chapter of my PhD.

Waterloo station was rebuilt between 1899 and 1922 because it was reaching capacity. The original station, constructed in 1848, had been extended in 1860, 1878 and 1885 because of the same problem (As I related here). However, realistically, these extensions created three stations at the same location that were a mess. Indeed, between 1885 and 1899 Waterloo had 18 platforms with only 10 platform numbers[1] and the SWRM of April 1922 called it ‘a source of bewilderment to the travelling public and a heavy responsibility for the railway officials’[2] Thus, in 1889 Jerome K. Jerome wrote in Three Men in His Boat that:

“We got to Waterloo at eleven, and asked where the eleven-five started from. Of course nobody knew; nobody at Waterloo ever does know where a train is going to start from, or where a train when it does start is going to, or anything about it.”[3] 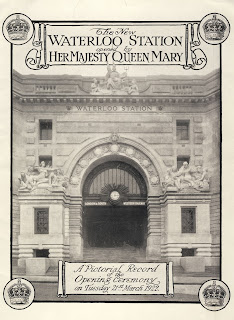 With the massive passenger traffic growth of the late 1890s Waterloo again became unsuited to requirements. Thus, the company obtained an act from parliament in 1899 for a complete rebuilding of it and an expansion of the space it occupied. This expansion eventually meant that the company had to rehouse the 1,750 people whose houses were demolished.[4] Up until 1910 the work was slow due to company suffering a capital shortage. However, because of the appointment a new company chairman in 1911, Hugh W. Drummond, and a new General Manager in 1912, Herbert A. Walker, the speed of the work increased. The war had some affect, but generally progress was good.

In the course of construction one major alteration was made to the original designs drawn up in 1899. On 20 February 1919 the L&SWR’s Engineering Committee ordered that the archway opposite platforms 19 and 20 be turned into the company’s war memorial, called the “Victory Arch”. [5] Different sections of the rebuilt station were opened between 1910 and 1922 as they were completed. Yet, the official opening by Queen Mary came on the 21st March 1922. The SWRM covered the event in full and issued a picture supplement with an account of the ceremony being written by a clerk in the General Manager’s office, Frank Gilbert.[6] 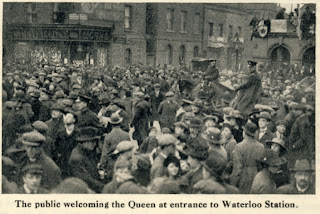 Gilbert described the day as being dull, there being ‘a few fleeting snow squalls, and a…tang in the air.’ The crowds thronged round Waterloo as George V and Queen Mary were both expected to be present to open the station. A royal opening was only fitting in Gilbert’s opinion and he described Waterloo as a ‘national possession.’ Furthermore, ‘it would be hard to express,’ he explained, ‘just what Waterloo means, not only to London, but to England…All over the country the very name of Waterloo Station conjures up a wealth of recollections – of romance, pathos, sport, sorrow and happiness. ’ Yet, the crowd were slightly disappointed, as, due to the ‘indisposition’ of the King, only Queen Mary was able to attend. 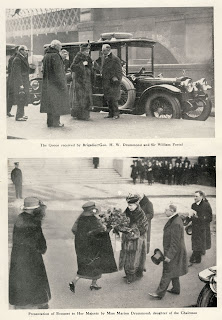 Outside the station waiting for the Queen were the company’s ‘Chairman, Directors, General Manager and Chief Officers,’ in addition to as many staff as the space permitted. The Queen’s car swung through the gates, which were decorated with evergreens and bunting, and came to a halt in front of the “Victory Arch.” On alighting from the vehicle the Queen was immediately greeted by the L&SWR’s chairman, Brigadier-General Hugh W. Drummond, and the Deputy-Chairman, Sir William Portal Bart. The Queen too had people with her, including Lady Ampthill, Viscount Valentia and Colonel Clive Wigram. Then, after pleasantries had been exchanged, Miss Marion Drummond, the chairman’s daughter, approached and presented the Queen with a bouquet of red roses. 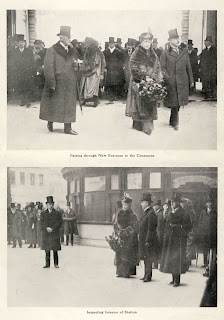 She then turned to enter the station, passing on her way a Guard of Honour composed of ex-soldiers employed by the L&SWR and who had been decorated for valour in the First World War. After exchanging a few words with some of the officers in the guard, positioned in its front row, she progressed through the seven long ranks of men drawn up before her. As she reached the last, a cheer rose from hundreds of the L&SWR’s staff watching in an enclosure behind. 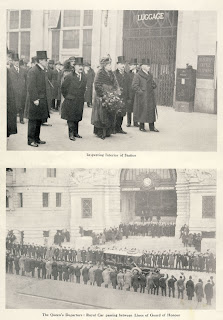 On reaching the top of the entrance’s stairs, the Queen broke the Royal Blue Ribbon stretched across it and the station was officially open. Yet, before entering, she stopped for some while to read many of the names of the 585 L&SWR employees killed in the war that are listed on bronze panels set into the “Victory Arch.” Then, followed by ‘directors, officers and ladies’, she continued into the station and was greeted by cheers from the crowds waiting on the concourse. The station was lined with bunting and flags, and on glancing upwards, toward the extensive glass roof, she exclaimed “What a splendid piece of architecture.”

The Chairman and Deputy Chairman then guided her to the new buffet, over which a Union Jack was draped and in one corner was a beautifully carved and engraved Roll of Honour that commemorated the L&SWR’s war dead. The Queen then returned to the concourse to be greeted by more cheers from passengers and staff. On reaching the middle, where the carriage way was, she expressed her appreciation to the Directors and Chief Officers present and boarded the royal car which was waiting. It then sped away down the slope, passing the guard of honour which lined the route, and returned to the palace to the sound of cheers.

‘And so,’ wrote Gilbert, ‘another chapter is written in the history of the great station.’[7] 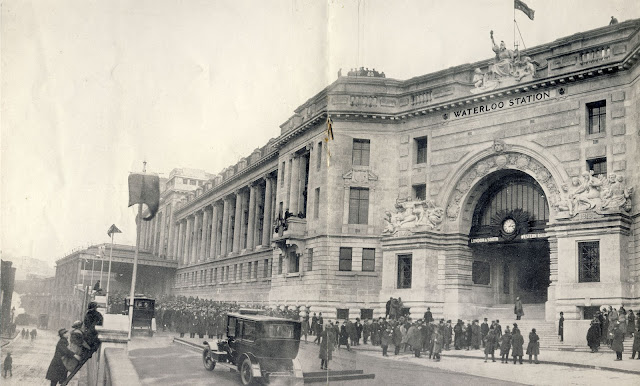