The child who sits out games...the Tories and High Speed 2

Now I didn't think I could get away without mentioning a little announcement that came on Thursday regarding plans to build a second high speed line northwards out of London. However as an avid reader of left-leaning and liberal blogs, I was surprised not to find any criticism of the Conservative position on High Speed 2 (HS2) beyond the established press. OK I may not have been looking that hard, but at least I did look. In truth I, and most rational people, feel that High Speed 2 should not be a party-political problem, as its development and construction will take place over a period of 20 years. Therefore given it could take four parliaments, possible alien invasions, and hover-boots to get going, the parties have to work together to make this happen.

All the parties endorse high speed rail. Indeed it was the Lib Dems that committed themselves to it first, the Conservatives followed, and lastly Labour signed up. So with this consensus established, in January 2009 they rallied around the company set up by the Government to look into building this line, the imaginatively named 'High Speed Two Limited' (HS2 Ltd). This cross-party cooperation was consistently and unequivocally backed by the Secretary of State for Transport, Lord Adonis who stated that the issue should be “above politics.” 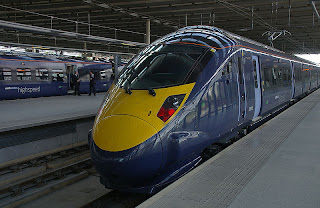 Get to mid-February and the Conservatives bolted from the consensus, refusing to see advance versions of HS2 Ltd's plans and waiting, like the rest of us, to see the report which was released on Thursday. In the process they also drew up their own plans using some 'industry experts.' Theresa Villiers, The Shadow Transport Secretary's, reasoning behind this lack of cooperation was that the Conservatives were "not going to give a political blank cheque to Labour." Withdrawing was a matter, or so she said, of holding onto their rights to draw up a separate alternative to the HS2 Ltd plan. She also stated that it would be “unfair” to make a deal behind closed doors. The problem with this argument was that it was all part-politically motivated, an attempt in an election year to separate themselves from what has, in all honestly, been a well thought out, well run, process.

Their arguments for withdrawing from the consensus were so wishy washy that you'd worry that the Conservatives were serious politicians. Firstly there was no indication that there was a political blank cheque anywhere. Such a thing would entail Lord Adonis standing up and saying “Look what I did! Praise the Labour initiative.” Well sorry Theresa, you can't win this one. Of course, the fact that Labour is in government means that they are the driving force behind the project, but Adonis has consistently and repeatedly stated that this is not a party political matter and has promoted this fact. In addition Lib Dem Transport spokesman, Norman Baker, said on the Guardian Daily Podcast, that he, and Villers, have had been given access to Lord Adonis, HS2 Ltd and all briefings. Additionally he said he was involved in the formulation of the proposals all the way. How then, Theresa, has the HS2 initiative been a blank political cheque when the project has consistently and loudly been shouted from the roof-tops as being cross-party and there has been no attempt by the Government to restrict the other parties' access? In truth the the fact that the Conservatives bolted is because it was an election year, and they would rather not be seen cosying up to Labour on anything. This was a mistake for them though. In reality the prominent cross-party nature of the project meant that, even in February, their rejection of this principal meant that they just ended up looking petty and isolated.

But it got worse on Thursday. It is not surprising that on day of announcement the Conservatives rejected, in part, the plan proposed by HS2 Ltd. While still wedded to the idea of the high speed line their two main objections were the proposed connections to Leeds and to Heathrow. Firstly lets take a look at the Leeds debate. In the HS2 Ltd plan the second stage of the route proposes that the line makes a Y shape after Birmingham, with one line going off to Manchester and another to Leeds. I would think this is a common sense approach considering that the aim of the line is to speed up the links between the North and South, and therefore stimulate economic growth. Well guess what, the Conservatives alternative plan rejected this logical simplicity. Their projected line would be run to Manchester and cross to Leeds in a L-shape. Why on earth would anybody wanting to go to Leeds travel to Manchester first, particularly when there is already a 2 hour link from London out of King's Cross? There would be no benefit in time saved for the traveller! This is a ridiculous plan, and just another attempt by the Conservatives to distinguish themselves from Labour.

The second bone of contention for the Conservatives was the Heathrow question. The line planned by HS2 Ltd would run out of Euston, through Old Oak Common, where travellers can connect with Crossrail and a 11 minute link to Heathrow through the Heathrow Express. There would be no direct link between HS2 and the airport. Again the HS2 Ltd plans were logical for a number of reasons that they set out, including the high cost of tunnelling under Heathrow itself and the fact that a direct route would add 15 minutes to the journey time from Birmingham. Thus the final route they proposed has been supported almost universally by the transport press, by Labour and the Lib Dems. It is the best plan, that avoids unnecessary effort and keeps an efficient and quick, albeit not direct, link between HS2 and Heathrow.

However on Thursday Theresa Villiers raised strong, but factious, objections to this plan. The Conservatives have been pushing for a direct link between HS2 and the airport from the start of the process, in an attempt to offset the mess they have got themselves into over the third runway. Villiers said that HS2 Ltd's plan was a 'betrayal' of the original vision and that not connecting Birmingham with Heathrow was a 'big mistake.' Thus the Conservative alternative proposals have the Heathrow embedded in them, like a tick, with a direct link between HS2 and the airport. This said, their plans actually don't have a perfect link between HS2 and Heathrow, and their route still means that travellers would have to get off the train just short of airport and get a shuttle bus service. Therefore how long would that take out of the passengers journey times? 11 minutes perhaps? Add the 15 extra minutes on the train journey and this adds a significantly large amount of unnecessary time onto journeys from Birmingham. Therefore, like their alternative route to Leeds the, the Conservative's Heathrow alternative has thrown logic out of the window, in an a paper thin attempt to differentiate themselves from Labour. This, however, has once again made them look ridiculous and confrontational.

In an interesting postscript to Thursday's events, yesterday Villiers' objections to HS2 Ltd's plans were further exposed as wishy-washy by resistance to the alternative proposals from individuals within her own party. Firstly Boris Johnson rejected the alternative scheme. While he did not commit to Labour's plan explicitly, he stated that, “A central London terminal is essential as well as an interchange with Crossrail to the west of London in order to whisk people to and from Heathrow as speedily as possible.” This, in essence, was a tacit acceptance of the HS2 Ltd plan. Further, on Thursday Villers made the foolish mistake of calling the Old Oak Common interchange site, which is in the Conservative controlled Borough of Hammersmith and Fulham, “Wormwood Scrubs International.” This quite naturally brought ire of the local council, and Mark Loveday, the council's head of strategy came out saying “It is unrivalled as a site for west London's High Speed 2 interchange.” While I wouldn't like to speak for the whole of the Conservative party, it is clear that the illogical stance of the Shadow Transport Secretary has divided internal party opinion.

Therefore from start to finish the position of senior Conservatives has been to go with their partisan instinct, rather than act with their brain, by consistently making this a party-political issue. They have consistently presented alternatives to the HS2 Ltd that are illogical and are simply different for difference's sake, in bumbling efforts to differentiate themselves from the consensus and Labour. However their plans, and their objections to the HS2 Ltd plans, have been rejected by the transport media, the other parties, and most notably voices within their own party. This has therefore made senior Conservatives look weak, confrontational and obstructionist. By separating themselves from the political consensus they are now simply the child who sits out games, when everyone else is having fun.
Posted by David Turner at 10:55