It was in 1880 that the L&SWR began to give female clerical workers greater responsibilities in the positions of Booking Clerks and Weekly Paid Clerks. The appointment of two female booking clerks have been found in the records. These were Miss Augusta Alice Long, who was appointed at Daggons Road Station on the 1st June 1880, as her father was the agent there. The second was Miss F.A. Dalby, who, in addition to performing telegraphic functions, also became a Booking Clerk at Torrington Station in October 1881, again because her father was agent at the station. However these women were only allowed to handle limited extra responsibilities as booking clerks, and the work did not have any greater status than the position of telegraphist.

It was in late 1881 that there was one, albeit small, movement forward in what the working remit of new female clerks was. In November that year, Newcombe, Agent at Haliwell Junction, requested that his niece be made a Telegraphist there. Instead the Traffic Committee appointed her as a Weekly Paid Clerk. In February 1883 the daughter of Mr Wright, late agent at Fulwell station, was also made a Weekly Paid Clerk. While the precise responsibilities of Weekly Paid Clerks is uncertain, what is known is that while Newcombe and Wright would have still have undertaken both telegraphic and booking duties, it is very likely that they would have supported the male clerical staff in administrative tasks.

These women, despite having slightly more responsibilities than previous female clerks, were still highly disadvantaged in comparison to their male colleagues. Firstly they were of course only 'weekly paid' and could be dismissed without notice. They were also paid only £19 5/- per year, as opposed to male Junior Clerks, who started on £30 per year. Further, it seems this wasn't a shift in company policy and in the years after 1883 the company still appointed women simply as telegraphists. In September 1890 Kate Deal received such a position at Southampton. What this suggests is that the women who were appointed to the posts of Weekly Paid Clerk recieved their positions in response the local requirements of the company, rather than a policy instituted by the company of increasing the opportunities to women.

The is especially true given female employment elsewhere on the L&SWR. Evidence suggests that the L&SWR did not employ female staff in clerical capacities except at country stations. In the period after 1898 the daughters of London based Traffic Department employees who wished to work on the railway received appointments at the Vauxhall ticket sorting office. I have found the names of fourteen of these women. Further, most of the widows of deceased Traffic Department staff were given positions as waiting room attendants, office cleaners or gatekeepers in the London area. In addition women had been working in the Nine Elms (Battersea) Carriage and Wagon works since 1871, however the majority of individuals working in this capacity had started employment in the 1880s. All were based in the sewing room, sewing carriage linings. At the same time the widows of ex-locomotive department men were given posts as office cleaners, lodging house keepers and mess room attendants.

Firstly, the evidence presented here suggests that by the end of the nineteenth and early twentieth century the types of work women were doing within the L&SWR was expanding. However, appointments were still always defined by the women's marital status and their husbands department. Importantly for the analysis of the development of female clerical employment on the L&SWR, the positions given to the daughters of railway workers in the city were always in non-clerical capacities, which held much less status than their colleagues acting as telegraphists elsewhere. Therefore, this suggests that those women appointed to clerical work by the company were given the posts because where they lived it was the only railway work available to them. This is highlighted by the locations at which they were employed, such as Torrington, Daggons Road, Halliwell and Fullwell. These places in the 1880s and 90s were simply villages, where the opportunities for women to gain employment would have been smaller than in the city. Therefore, on the L&SWR, the pre-1914 female clerical workers were an anomaly in the system, and presumably the company would have given the women much lower status work had it been available to provide it.

It is at this point that I must jump ahead to 1914. Bar career histories and personal details, I have no information as to whether any further female clerical staff were appointed between 1890 and March 1914. It is in March 1914 that the company decided that there should be a codified policy instituted with regard to the appointment of female staff. I am not certain as to what the initiating factor of this policy was, however, it may have been the result of an industry-wide acceptance of women as railway workers, as well as the number of women rising in the British workforce. 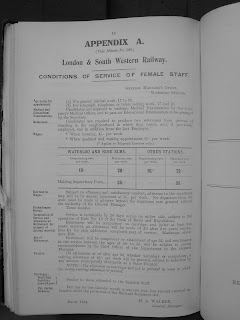 According to Wojtcak, by 1911 British Railway companies employed 1,120 female clerks (1.32%), compared with 84,802 men (Wojtczak, 2005, 29), and increasing numbers of companies were investigating whether more women should be appointed as clerks. The Great Western Railway (GWR), the L&SWR's northern neighbour and long-time rival, had started employing female clerks by 1908, whereas by 1906 the North Eastern Railway (NER) was already employing 94 and the London and North Western Railway (L&NWR) were employing 250. (Matheson, 2002, 137) However the L&SWR was quite behind the national trend and according to the records it is known that in the same year the L&SWR only employed two female clerks.

Another factor that my have played a role in the L&SWR's introduction the formal policy for female staff in March 1914, was the appointment of a new General Manager, Herbert Ashcombe Walker, in 1912. Walker had been a London goods manager on the L&NWR. It may be a coincidence, however all 250 of the L&NWR's female clerks had been based in the abstracting and ledger posting part of its London goods department. It is quite possible that Walker saw the virtue, and the financial benefit (in that women were cheap labour) of employing female clerical staff, and introduced the policy as part of his many wide-ranging changes to the company.

The L&SWR's terms of employment for female staff are shown above, however the company only appointed three new female clerical staff members between March and the 3rd August 1914 when war was declared by Britain. They were Mabel Cole, Florence Emily Elliott and Ada Muriel Coombes, who all became a telephone operators at Waterloo on the 24th July. These cases show that even after the institution of a formal policy for the employment of women, their appointments on the L&SWR were still restricted to communications work, possibly reflecting management's perceptions of the capabilities of women. Only with the coming of the First World War would women receive the opportunities to become full clerks, with the same roles and responsibilities as their male co-workers.

These two Blog entries are not a comprehensive history of the female clerical workers of the L&SWR, and much more needs to be said and more analysis undertaken. However, what they have shown is that before World War One women were never really afforded greater opportunities than becoming communication clerks. However, even then their appointment to clerical positions was dependent on their location and their contacts. This is in contrast with other railway companies where by the early 20th century women were acting in full clerical roles at their administrative centres. Therefore, the L&SWR was generally a railway company with a poor record on female clerical employment, and it was only the war that widened women's opportunities within the company. However, that is another story for another time.
Posted by David Turner at 12:19