Your new train will not arrive

I suppose I couldn't write a new Blog entry without mentioning the plans announced by Lord Adonis to put the Intercity Express Programme (ICP) on hold. This programme was initiated by the Department for Transport (at that point under Geoff 'you send me an email and I won't give you my support' Hoon) in November 2007 and was designed to replace the ageing class 125 HSTs and class 225s currently at work across the network. The project would cost £7.5 billion, would be a 30 year commitment by the government and see the introduction of 1400 new carriages. The DfT specified that the trains were to be low-emission, have both diesel and electric variants (as well as a bi-mode) and would be suitable for both suburban and long distance routes, reaching speeds of up to 125 mph. Time passed and in February 2009 it was announced that the highly un-imaginatively named 'Agility trains,' a consortium led by Hitatchi, was the DfT's preferred bidder. And then we had mostly silence from the DfT...until now

What happened on Friday was t 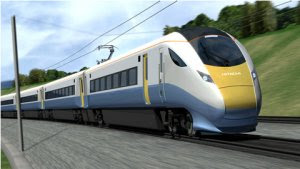 hat Lord Adonis simply said 'hang on a minute!' He postponed the programme, and asked Sir Andrew Foster, who was previously at the helm of Audit Commission, to look into the value for money of the project, as well as determining whether any other courses of action are viable. Originally all contracts were to be signed in April 2009, however as April has come and gone it is clear that the DfT was either dragging its heels, the circumstances within the railway industry changed or that there was a problem with the original concept.

Firstly I'll turn to Theresa Villier's, Shadow Transport Secretary's comments. She said "The intercity express programme has been blighted by Government incompetence at every turn.” She also charged the government with "micro-management" and costing the tax payer millions of pounds for no return. By now it is clear that what Villiers has done is just put on the old Tory record with three tracks, 'incompetence,' 'micro-management' and 'loadsamoney.' There is no real substance to the argument...but then that's what we've been used to from the Conservatives.

It is clear that the postponement is due to a number of quite logical factors. Firstly, like everything at the moment, lets blame the financial crisis. If we consider that the deadline for contracts to be signed was April, and that the Hitatch consortium was announced as the front runner in February, this indicates that at that point the DfT were on the verge of signing and meeting its target date. But as the financial crisis deepened the DfT held off committing the government and the country to a £7.5 bn project over the next 30 years. This is not, I'm sorry to say Theresa Villiers, incompetence. It it simple common sense not to flush shit-loads down the drain when the ability of the Government and the Taxpayer to bare the load was dubious. Therefore they just held up spending the money at this point, until things stabilise, especially as the money was probably needed elsewhere. This is evidenced by Adonis being very upfront about one of the reasons he held up the project, stating that "Over the course of the procurement there has been a reduction in the capacity of the debt market to support the transaction as originally envisaged, and passenger growth has also slowed." Thus it would be ill-advised to spend large sums of money when the country cannot afford it. But what's more the DfT's plans for the railways have changed, rendering the ICP project not as necessary as previously thought.

This is not really as surprise. Hoon, who initiated it, wasn't a railway man, or, to my knowledge, even had an interest. He was just given the DfT as a demotion after being Secretary of State for Defence, Lord Privy Seal and Minister for Europe. His instillation as Secretary of State for Transport was the twilight of his political career, and as much as I love Transport, being assigned the DfT is not glamorous and comes with next to no prestige. Therefore in the eight months I'm not sure how much enthusiasm the man could muster when he realised he had been put 'out for pasture' there. As such this was the only major new initiative he announced. To be fair it isn't a bad idea to replace the ageing trains, its just not that imaginative, and doesn't solve the real long-term problems of the railways.

However when he resigned last June to 'spend time with his family' and then plot against Brown, they got the Adonis in. Adonis came from a different direction having been Minister for Transport under Hoon. Here was a man who wasn't just interested in railways, but genuinely cared about them. It is an understatement to say that the majority of people like Adonis, even if they don't agree with him. In the eight months since his appointment has commissioned a report investigating a north-south high speed line, has kicked out a failing franchise holder, National Express East Coast, only to nationalise the service as well, and he has announced the electrification of various routes most notably the Great Western and Midland Main Lines. This, quite evidently, is a man that actually has a vision for the future of the railways and pushes for that vision within government. Hoon was, for the railways, a bit of a damp squib in comparison.

Importantly for the ICE programme is that by announcing the Electrification of some routes Adonis has changed the rolling stock requirements on them. This therefore would have been a considerable factor in the delaying further the project. Again, why should the taxpayer pay for a project that was unsuitable within the new framework of policy proposals that have been initiated by a man that sees the future of the railway network more clearly than anyone has in the last 25 years? Why should the DfT press ahead with a project that would not slot in well with the current thinking about what is needed for Britain's Railways? Villiers likes to charge the DfT with the usual problems, in reality I think the Tories would be jumping up and down far more if the government had signed contracts and committed the country to an unsuitable set of investments.

Yes money has been spent on the project, but the waste of a few millions, essentially small change for the Government, is far better than wasting 7.5 billion now isn't it? It is possible the postponement and reassessment could have been made sooner, however I tend to think that rushing decisions about such an expensive projects, even if they are going to be put on hold, is never a bad thing. Adonis, I feel, has taken his time and made the right decision.