Stagecoach Rail...any chance of some profit?

Ah so it is a good day for the railway industry. Stagecoach, the firm that runs East Midlands Trains, and my local provider, South West Trains (SWT), as well as owning a very silent 49% of Virgin trains, has said that that the revenues from the railway division rose 2.1% in the 40 weeks up to February 7th. Tickets sales on SWT rose 3.4%, while on Virgin Trains revenues rose 8.8%.

Well if that isn't inflation-busting good news for their rail business, even if Stagecoach's North American Division is performing poorly and the fact that people don't want to stand in 6 ft of snow has hit the profits from their bus operations quite hard. Overall however stagecoach remained confident in its position that the cash would keep rolling in. It shows, in large part, that everything is on the up for rail travel, everything is going green in the garden of Waterloo station and, well, the economy is doing better. This said as a precaution they won't be paying a dividend in respect to the year ending 30th April. 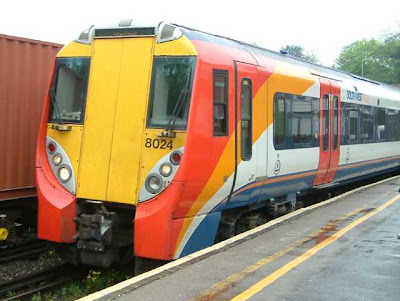 Yet not all is rosy at Stagecoach. SWT are currently in the middle of £100 million contract negotiation (OK bust-up) with the Department for Transport over how much taxpayers money they should be given in franchise payments, including revenue support payments. Basically because railways don't make money, a basis I'd tend to say was a bad thing to base an industry on, the Train Operating Companies (TOCs) are paid 'franchise payments' to ensure the private companies stay in the business. Clearly however this isalso so that they make sure they pay dividends to their shareholders. In addition some companies have been receiving top-ups, to keep them going. But at the same time most companies pay fees to the DfT (and hence why National Express booted off the East Coast franchise...they couldn't). Thus SWT in the six months to November paid £50 million to the DfT, whereas in the previous year they paid only £5 million.

In my opinion the contract negotiation shows how a) the franchise system is about logical as jam and Marmite sandwiches (you could do it, but I wouldn't advise it) and b) that the TOCs and the DfT are consistently beating the living crap out of each other. If we consider that firstly SWT receive money from the DfT (previously £100 million but with top ups), BUT that last year they paid £50 million back, up from £5 million, this seems illogical at first glance. Well let me break the bad news, the views of both parties are entirely logical given their positions, but both are detrimental to the traveller.

Firstly the DfT being handed tightened budgets and increased costs, especially running the East Coast franchise, understandably want to reduce the subsidies they pay out to the TOCs. Now at this point I hope that Stagecoach's view is this: that if they are receiving less from the DfT, but having to pay more back, means that they invest in trains less, they have to raise ticket prices and that station facilities will suffer. Yea...we hope too much. Their 'logical' position is based, in my opinion, simply on profit. I'm not someone who blames businesses for acting like businesses, it's in their nature to want to make profit. That's why the unfettered free market doesn't work and good government regulation is required.

The reality is that the SWT-DfT slanging match hinges on the contract wording. The original contract states that if SWT's revenue falls to under 94% of projections, the Government will reimburse 80% of the shortfall (so if it is 6% down, the DfT pays 4.8%). Conversely the DfT collects 80% of any profit above 106% of the projections (so again it collects 4.8% of the 6% profit). SWT won the contract by agreeing to pay the DfT 1.2 billion over nine years, ending in 2016. The despute comes regarding when SWT believes the revenue support starts from. SWT believes, for obvious reasons such as the economic crisis, that the date should be April 2010, whereas the DfT believes it should be February 2011. Now I'm no legal expert, but you'd think that'd be something specified in a contract? So we are now waiting for an arbitrator to make up her or his mind. we think this will come in the Summer.

I'm sorry to break the bad news to you, but whatever happens though the long and the short of it is that you, the traveller, will loose out. If the economic situation declines further, and revenues drop below 94%, it doesn't matter when the contract starts, ends or finishes - you loose. An arbitrator's decision stating that the contract starts in April will probably allow SWT to use the extra money to start paying dividends again. If the contract starts later, SWT will reign in their services, raise fares and possibly let station improvements fall by the wayside, again in an attempt to pay dividends. If the reverse looks like happening, and things continue to improve and profits rise, irrespective of when the arbitrator says that the contract begins, SWT will use the money, once again, to pay their shareholders, larger, more normal dividends.

Therefore I cannot foresee a scenario, short of the DfT forcing SWT to do something, where any of the benefits of an improving financial situation may be passed on to the traveller. The chiefs of Stagecoach used this announcement to call for a reassessment of the franchise system. Tony Collins the boss of Virgin said, "The franchising model needs to change, it's not good for the Government either because they now have a lot of franchises where they are paying additional revenue support." Yes Tony...please can we scrap it, it ain't doing me any good!
Posted by David Turner at 07:18